Go to homepage
A Chance to Give Back
Poverty 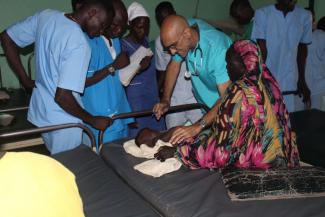 Dr. Tom Catena tends to a newborn during rounds at the maternity ward, in Mother of Mercy Hospital in Sudan's Nuba Mountains. Photo courtesy of Dr. Tom Catena
by Tom Catena March 17, 2022

This coming March, we, at the Mother of Mercy Hospital, will celebrate our fourteenth year of operation. We are located in rebel-held territory in the remote region of the Nuba Mountains in the southern part of the Sudan. Even though there is currently a ceasefire between the rebels and the government, we don't receive any support from the government in Khartoum. It's better than it was a few years ago—at least now we don't live in fear of government aerial bombardment or ground forces overrunning our hospital.

Due to forty-some years of nearly continuous civil war, there is almost no development—our area has no paved roads, running water, electricity, or phone service. The hospital is an exception. The water comes from a well and is pumped up to two 5,000 liter tanks by a solar pump. Electricity is provided by a bank of solar batteries and we have a 12.5 kilowatt diesel generator as a backup. We sterilize all of our gauze and instruments using a non-electric steam sterilizer over a charcoal fire. Health facilities are few and far between and only a handful are supplied with medicines throughout the year. Getting our supplies here is a big problem. Most drugs and supplies are bought in Kenya, which is two countries away from us, and they are delivered by truck, a trip that can take a month or more depending on weather.

It's been in this context that we have endeavored to build up a referral hospital. When we saw our first patient on March 25, 2008, we were an 80-bed hospital and clinic with eight expatriate (Kenyan and Ugandan) and fifteen local Nuba staff. None of the local staff had any formal training and the person with the highest level of education had finished primary school. There were no high school graduates until 2009/2010. Over the ensuing years, we have sent forty of our staff to Kenya, Uganda, and South Sudan for training in all the different cadres of medicine—nurses, midwives, laboratory technicians, pharmacists, anesthetists, medical doctors, and more. Now, 36 percent of our staff is formally trained and we have two doctors completing their internships in Kenya and Uganda. We have a clinical officer (equivalent to a physician assistant) who is trained in cataract and other eye surgeries. We are planning to open a clinical training school this July, that will initially train clinical officers, and then midwives and nurses.

Over these fourteen years, our 80-bed hospital has grown into a 435-bed institution with six outreach clinics that sees people from as far as the far north of Sudan to Darfur and South Sudan. That's like someone traveling across the length of the United States—and doing it with a transport system that can only take one halfway. Because of the ceasefire, we are now seeing many patients from government-controlled areas. It seems that the health facilities in rural government-controlled areas are very limited. Khartoum and other large cities have some good facilities but they are privatized and far too expensive for most people.

Last year, we treated 160,000 outpatients, performed 2,271 operations, and admitted 6,892 patients to our wards. The financing for all of this work, except for a donation of food for the patients, has come through the kindness and generosity of people making individual donations. A few smaller foundations are partners but we receive no funding from large institutional donors, nor do we have the infrastructure to solicit for funds, meet the often-onerous reporting requirements, and do the monitoring and evaluation required by all of the big donors.

Given that our immediate catchment population is 1.5 million and that we draw patients from greater Sudan, we see a very large variety of pathology. Sadly, many of these diseases are "diseases of neglect and poverty." In other words, they are conditions that would be much less severe if the patients had early and proper intervention.

Allow me to give you a few recent examples. One was a 10-year-old boy with a badly deformed lower leg which was the result of an untreated fracture as a toddler. We had to amputate the leg below his knee but will make sure he gets a prosthetic limb when a visiting orthopedic technician comes this Spring. Another case was a 25-year-old man with a massive jaw tumor called an ameloblastoma which greatly disfigured his face. We were able to remove half of his jaw from inside his mouth and expect a good recovery. Amazing how the body can adapt to these changes!

A young woman of 25 years had a large tumor sitting behind her right eye causing tremendous disfigurement. The tumor had been growing for 10 years—she had been in Khartoum where she had a CT scan done in 2016 but couldn't afford any further treatment. We were able to dissect behind the eye and remove the bulk of the tumor and are looking forward to a good result. Another young woman of 20 years has been leaking urine since prolonged labor two years ago. She has a large hole connecting her bladder and vagina as a result of the pressure from the baby's head and leaks urine 24 hours a day. We can repair the smaller holes but this one is beyond our capacity. We will try to get her referred, but I don't think this defect is fixable and we will need to try other alternatives. A simple Caesarean section would have prevented all of her problems.

My motivation to carry on with the work here—I've now been in Africa for twenty-two years and fourteen of those were spent in Nuba—is very simple. My Christian faith takes seriously the command of Jesus to "take care of the least of my brothers and sisters." I've been given all the breaks in this life—a good family, a stable home, the best opportunities for education, and it’s my turn to give back. Our good Lord has blessed me abundantly and I need to share that blessing.

Tom Catena is a U.S.-born physician who has been practicing medicine in South Sudan since 2008. He is the founder and medical director of the Mother of Mercy Hospital in the Nuba Mountains, Sudan. In 2017, Dr. Catena was awarded the $1 Million Aurora Prize for Awakening Humanity.

A New Era of Climate Action Calls for Climate Doctors

Educating this generation of physicians in climate resilience is critical