Go to homepage
He Shaped the Field of Global Health
Poverty 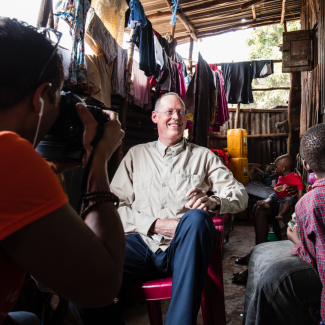 Paul Farmer visits Ebola survivor Yabom Koroma and her family at their home in the Mountain Court section of Freetown, Sierra Leone, on December 14, 2015. Photo courtesy of PIH.
by Michael H. Merson February 27, 2022

It has been a week since we heard the shocking news of the passing of Paul Farmer. Many have written very moving testimonials about Paul's accomplishments and the countless number of lives that he touched. I will describe here how he shaped the field of global health by challenging our ideas about health care.

Paul believed that everyone deserved respect and care, especially when they are sick. He refused to accept the gross health inequities that exist around the world and he wanted to provide the highest quality health care to the poorest people everywhere.

Paul believed that everyone deserved respect and care, especially when sick

In 1987, fresh out of his medical training in Boston and more than a decade before global health was a recognized academic field, Paul and a few of his colleagues founded Partners In Health (PIH). Paul was the main inspiration for many of its efforts. In the 1990s, PIH demonstrated successful use of second line therapies to treat multidrug-resistant tuberculosis in Peru and of antiretroviral drugs to treat AIDS in Haiti, debunking the widespread belief that treatment successes for both diseases were impossible in resource-limited settings. PIH then went on to establish health facilities in Haiti and Rwanda, where Paul spent much of his time teaching countless numbers of physicians, nurses, and students. When Ebola broke out in West Africa in 2017, PIH established Ebola treatment facilities in Liberia and Sierra Leone. All told, PIH has helped strengthen government health systems in more than a dozen countries.

At home, Paul launched in 1997 a unique Program in Infectious Diseases and Social Change in the Department of Global Health and Social Medicine at Harvard Medical School. He became Chair of the department in 2009 and the following year established the Program in Global Health and Social Change, which expanded his earlier program to include a much larger set of diseases. The Program emphasizes the importance of understanding the political and social causes of disease and draws upon faculty expertise in the social sciences, bioethics, economics, epidemiology, and the history of science. It also seeks to implement and evaluate novel strategies for health-care delivery that are locally acceptable, effective, and equitable. Faculty in the department teach students from the undergraduate to the postgraduate level who seek to understand medicine and the social forces that affect health, both in the United States and in local field sites globally, many of these linked to PIH.

Throughout his work at home and abroad, Paul had a passion for human rights and believed deeply in the decolonization of global health. He was editor-in-chief of Health and Human Rights Journal, and he served on the boards of numerous nongovernmental organizations dedicated to the provision of equitable health care.

I first met Paul early in my tenure as director of the Duke Global Health Institute. Paul was a Duke undergraduate and was instrumental in the establishment of the institute. The Duke freshmen class of 2008 was assigned to read Mountains Beyond Mountains, Tracy Kidder's moving story about Paul's work and life, before arriving on campus. That year, we invited Paul to give the inaugural lecture on global health. More than 1,000 students attended and remained long after to talk with Paul. That year the university established what has become a very popular undergraduate major in global health. I would meet with Paul often. He served on the Institute's Board of Advisors and spoke at our University commencement in 2015. He, Victor Dzau, president of the National Academy of Medicine and then Chancellor of Health Affairs at Duke, and I traveled to Haiti shortly after the earthquake in 2010 to explore how Duke Medicine could help him establish his new University Hospital of Mirebalais. We visited some of the PIH health facilities and I remember how proud he was to show us the first patients treated with modern cancer drugs.  Only three weeks ago, he and Agnes Binagwaho, his close Rwandan colleague, gave the Victor J. Dzau Distinguished Lecture on Global Health at Duke remotely from the University of Global Health Equity in Butare, Rwanda, where he died.

Paul's love of treating patients and his spirit of service gave him strength. He was kind and gentle to his patients. Many have referred to him as a champion because he was willing to take on worthy challenges, no matter their scale. Where others feared barriers, Paul saw tremendous need. The ideas and beliefs in social justice and equity that he advocated for are the foundations of global health today. Because of Paul there are many around the world who are striving to make the world a better place. He was a one-in-a-generation and I am grateful to have known him.