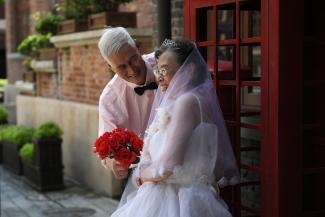 Chen Guozhi, 85, and his wife Chen Suzhen, 82, pose during a photo shoot to recreate wedding photos for elderly couples, who have been married for more than 50 years, Tianjin, China, August 16, 2018 REUTERS/Tingshu Wang
by Wang Feng March 17, 2022

Half a century ago, no one in their wildest dreams could have imagined the China of today. Fifty years ago, China was a country where life was lived on the margins of subsistence. Mao Zedong—a communist revolutionary and founder of the People's Republic of China—was still the supreme leader of the land. Under his leadership, three decades of socialist experimentation led to impressive improvements in population health, thanks largely to a public health program and more equitable food distribution. Life expectancy increased by more than twenty years (in as many years), from around 40 to over the age of 60. Yet under Mao's watch, there was virtually no improvement in access to the most basic food supplies, such as grains and vegetable oil. Most Chinese people were living on the edge of poverty.

Improvement in health fueled population growth in what was then, and still is, the world's most populous country. China's population size nearly doubled in three decades, from 550 million in 1950 to nearly one billion in 1980. In the early 1970s, China's population registered an annual growth rate of 2.2 percent and was projected to double again over the next 30 years or so were this rate to persist. Malthusian fears of a runaway population growth eventually led China to enforce the harshest birth control on earth. Beginning in the late 1970s, for more than three-and-a-half decades, the majority of Chinese couples were restricted to having only one child.

That picture of China—of rapid population growth and worsening material scarcity—has been turned upside down completely during the past half-century. China is now a land of abundance. Instead of doubling in size, it has effectively entered an extended era of population decline. Its population age structure has moved away from a bottom-heavy one with numerous young people and fewer seniors, to a top-heavy one with an increasingly larger share of the population over the age of 65. In the early 1980s, not even 5 percent of the total population was 65 years and up—but this figure more than doubled by 2020, to nearly 12 percent, and is projected to climb to 30 percent over the next 30 years, by 2050.

A rapidly aging population, in a country that has only recently ascended to the upper-middle-income status, has earned China the characterization of "getting old before getting rich." But it would be more accurate to say China is getting old while becoming rich.

Thanks largely to nutritional improvement, a seven-year-old child living in rural China today is about eight centimeters taller than they would have been in 1990, a pace of improvement that is twice that (historically) of the West and Japan. Life expectancy at birth in China now has risen to a level on par with the United States, a country that has a per capita income level several times higher.

Due to better nutrition, a 7-year-old child in rural China today is about eight centimeters taller than a child in 1990

With advances, come challenges, though. China is now confronted by new health risks and diseases never seen in its history, in part due to its "age of abundance"—a three-decade economic boom that brought with it western foods and goods. The decade after Mao's death registered sharp increases in the consumption of tobacco, alcohol, and sugar. From the mid-1970s to the mid-1980s, China saw a 60 percent increase in per capita pork consumption. Also in the decade after 1978, the country witnessed a 151 percent increase in vegetable oil consumption, per capita liquor consumption rose 344 percent, and per capita sugar consumption increased by 55 percent. Per capita cigarette consumption more than doubled. Excessive consumption of tobacco and alcohol, made possible by increased income, resulted in an increase in lung and liver diseases and deaths due to lung cancers. Poor nutrition during childhood years and then the sudden availability of abundant and varied foods led to a rapid increase in obesity, hypertension, and diabetes. In the early 2010s, 244.5 million or 23.2 percent of Chinese adults aged 18 and over reported to have hypertension, with another 435 million, or 41.4 percent, having pre-hypertension by Chinese standards.

A land of tofu for millennia, China in the last decade has become, by far, the largest dairy importer in the world, accounting for over one-fifth of global dairy product imports.

With the influx of dairy products, processed foods, and sweetened soft drinks and snacks, recent generations of Chinese children are growing up not just taller, but also with new health risks that can lead to disease later in life. The proportion of overweight school children aged 7 to 18 shot up 28 times between 1985 and 2000, with obesity increasing by four. Increases in obesity were particularly pronounced among boys, likely attributable to the prevailing son-preference, combined with a large number of children who were the only children. Boys were privileged over girls for food when it was limited, and for health care and education. With only one child in the family and recently increased income, it was hard for parents to resist the temptation to indulge their children with snacks, fast foods, as well as computer games, which led to a more sedentary lifestyle.

By the early 2000s, obesity rates in Chinese cities reached 12.9 percent among boys ages 7 to 9, and 9.1 percent among boys ages 10 to 12. In the mid-1980s, these rates were only between 1 and 2 percent respectively. At the young age of 7 to 9, 25.4 percent of boys and 17 percent of girls were considered overweight or obese. In contrast to the earlier generations, whose early-life health risks were mostly attributable to lack of nutrition, those who were raised during China's age of abundance face very different early-life health risks.

In the early 2010s, almost 245 million—23 percent—of Chinese adults over age 18 had hypertension

Changes in causes of death foretell challenges to health care and the inevitable attendant increases in costs associated with health care. In 1990, cancer, cardiovascular diseases, and cerebrovascular diseases—all noncommunicable diseases (NCDs)—accounted for about 60 percent of all deaths among the urban population and 45 percent among the rural population. By 2018, these causes combined accounted for about 70 percent of all deaths, for both urban and rural populations. Increases in NCDs are outcomes of increased health risks associated with lifestyle changes and worsening environmental degradation, both accompanying China’s rise to abundance. They also reflect changes in the population age structure, with more elderly persons in the population. As China's population continues to age, there will no doubt continue to be an increase in NCDs, which are costly to care for and less likely to cure.

Seniors in China, many of whom had only one child, now expect government-provided social benefits and services, such as health care and a pension. Public spending on health care and pensions have already risen sharply since the turn of the century with government spending on health care and pensions in 2020 accounting for 9.4 percent of the country's GDP. The share was only 3.5 percent back in 2007. With China's population aging and increases in benefit levels, such spending could ramp up to one-quarter of China's GDP by the mid-twenty-first century, a share that roughly equals to the government's entire GDP spending today.

China has ascended to an age of material abundance and its population has started to shrink. Both were unthinkable merely half a century ago. With them, an entirely new era for China, and the world, has arrived.

Wang Feng is a Professor of Sociology at the University of California, Irvine.