As the nation diversifies, why a "one-size-fits-all" approach won’t work for treating gestational diabetes 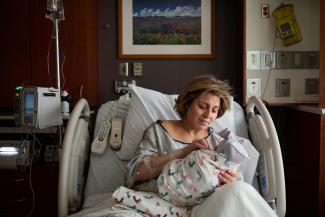 A woman holds her newborn child after giving birth in the Family Birth Center at Beaumont Hospital in Royal Oak, Michigan, on February 1, 2022. REUTERS/Emily Elconin
by Tulika Rastogi September 21, 2022

When the Centers for Disease Control and Prevention (CDC) released a report in July indicating that gestational diabetes mellitus (GDM) is on the rise in the United States, it felt personal. I was one of the data points in the report. For me, the implications were real. I wasn't overweight, but my South Asian background was a risk factor for gestational diabetes. The embarrassment and confusion of being diagnosed with gestational diabetes at twenty-eight weeks clouded my immense joy of becoming a mother. I couldn't help but ask myself, "What did I do wrong?" But the new report suggests there are factors, such as ethnicity, that may not be within a pregnant woman's control.

For the report, the CDC collected data on all U.S. births from 2016-2020. The trends in the data were observed in the American ethnicities by maternal race, origin, age, body mass index (BMI), and state of residence. The findings reveal a 30 percent increase in GDM cases from 2016-2020, with the highest 13 percent rise coinciding with the COVID-19 pandemic, between 2019 – 2020. The incidence rate was highest for non-Hispanic Asians and lowest for non-Hispanic Black women. Specifically, GDM incidence was highest among Asian-Indians (16.7 percent), followed by Vietnamese and Filipinos (15.2 percent each), and Guamanians (13.8 percent) in the United States. It was lowest among non-Hispanic Black (6.5 percent) and non-Hispanic White (7 percent) individuals. During the pandemic, the largest rate of increase was in women aged forty and over with comorbidities—who had more than one medical condition at the same time—including obesity.

Rate of Gestational Diabetes in the U.S., by Mother's Ethnicity, 2020

"While this report from the CDC demonstrates a 20 percent increase in the rate of GDM over the past five years, the absolute rate increase went from 6.0 percent to 7.8 percent. However, this is impacting more than a quarter of a million women annually in the United States," says Mark Turrentine, chair of the clinic consensus obstetrics committee at The American College of Obstetricians and Gynecologists, and professor of obstetrics and gynecology at Baylor College of Medicine.

U.S. Census data shows that the median age at which U.S. women gave birth reached a 30-year high in 2019. Another study found that only two in five women with a live birth in 2020 had a normal body mass index (BMI) before pregnancy.

"The rise in gestational diabetes parallels the rise in overweight and obesity," says Janice Henderson, coordinator of the Nutrition in Pregnancy Clinic and assistant professor of gynecology and obstetrics at Johns Hopkins Medicine.

Given that the country is getting more ethnically diverse with advanced gestational age and a higher BMI, census data helps better understand mothers' experiences in self-management of their blood glucose levels and health-care providers' perspectives of treatment strategies.

All pregnant women have some insulin resistance during pregnancy. It is a normal part of pregnancy and is essential to maintain the fuel supply to the developing fetus. However, when women with preexisting conditions enter pregnancy with little insulin resistance, it worsens as pregnancy advances. Preexisting conditions may include obesity, advanced gestational age, previously delivered a baby of more than nine pounds, a congenital disability, a history of stillbirth, a history of GDM, a family history of diabetes, polycystic ovary syndrome (PCOS), or an ethnicity that is more vulnerable to diabetes than others.

A mother's metabolism directly affects the fetal brain. The placenta, which supports the fetus as it grows, produces certain hormones that block the mother's insulin from being used by her body—called "insulin resistance." It forces the pancreas to work harder to produce more insulin, but that insulin does not lower blood sugar. It eventually causes excess sugars in the mother's blood leading to hyperglycemia (an excess of glucose in the bloodstream) or gestational diabetes. Health providers check for gestational diabetes mellitus—diabetes during pregnancy—around twenty-eight weeks, in the third trimester of pregnancy.

Studies have shown that gestational diabetes could induce insulin resistance in an unborn child. This means that extra glucose in the baby's blood forces the pancreas to make excess insulin, which could lower their blood glucose levels after birth. This could "train" an unborn child's brain-appetite center for greater food intake, which could lead to a higher risk of obesity after birth.

"Big babies are more likely to be big adults, and thus the problem perpetuates itself, generation after generation," says Henderson.

Poorly managed gestational diabetes could also increase the risk for preeclampsia, shoulder dystocia (when the baby's shoulders get stuck inside the mother's pelvis during birth), macrosomia (larger than average newborn), and require cesarean delivery.

"The presence of gestational diabetes mellitus can result in adverse health outcomes for both mom and baby. This may include short-term negative outcomes such as hypertensive disorders of pregnancy and higher rates of cesarean birth, preterm delivery, and large for gestational age infants, as well as long-term negative outcomes of women developing cardiovascular disease or adult-onset diabetes [both in mother and the child]," says Turrentine.

Thirst, lowered immunity, exhaustion, and frequent urination, all things commonly associated with pregnancy, are also common symptoms of gestational diabetes, making self-diagnosis difficult. Once diagnosed, mothers have to manage GDM for the entire duration of their pregnancies. If GDM doesn't resolve after birth or during breastfeeding, a woman can develop type 2 diabetes.

"With the continued rise in obesity in the United States, all obstetric care providers have noted an increase in related comorbidities, such as GDM and hypertensive disorders of pregnancy," says Turrentine. The CDC data, sourced from U.S. birth certificates, gives a glimpse of the global reach of GDM. A study out earlier this year in JAMA indicated that from 2014 to 2020, the frequency of multiple adverse pregnancy outcomes in the United States increased among all pregnant individuals with gestational diabetes, with the persistence of differences by race and ethnicity.

South Asians with diverse cultures are broadly similar in their beliefs and practices relating to pregnancy, diet during pregnancy, childbirth, and postpartum practices. Postpartum weight gain can lead to developing type 2 diabetes in women who are already at risk.

"Given that South Asian women have the lowest rates of overweight, yet the highest rates of gestational diabetes suggests a heavy genetic component"

Differences in pregestational BMI and educational attainment could influence the risk of gestational diabetes and the quality of prenatal care. For example, among South Asians in the United States, Asian Indian individuals had the highest rates of gestational diabetes at first live birth despite lower BMI levels and higher educational qualifications. On the contrary, American Hispanic/Latina individuals had a relatively higher BMI and lower educational attainment at first live birth. Despite these contradictions, people of Asian Indian and Hispanic/Latina heritage in the United States have the highest rate of gestational diabetes. Considering other risk factors for GDM, some groups have a higher risk of GDM than others.

"The reasons for this are unclear and likely multifactorial—genetic, lifestyle, environment. Given that South Asian women have the lowest rates of overweight/obesity and yet the highest rates of GDM suggests a heavy genetic component," says Henderson.

Various studies confirm that causes point to a person's genetic makeup and differences in diet during pregnancy. For example, a study from Norway shows that South Asian women are more likely to be insulin resistant in early pregnancy (before twenty weeks) than Western European White women. A compensatory increase in beta cell function—insulin-making cells—was significantly lower in South Asian women, meaning they were more insulin resistant. Their pancreatic beta cells were secreting less insulin, thereby unable to meet the insulin demands of the pregnancy.

As high-risk as gestational as diabetes is, it can be managed if diagnosed and treated promptly after diagnosis. "It is important for individuals with GDM to understand this is a limited condition during the current pregnancy. While the interventions for the treatment of GDM during pregnancy can be challenging to the individual at times, maintaining these nutritional interventions with monitoring of glucose levels can result in a good pregnancy outcome," said Turrentine.

Managing gestational diabetes begins with self-monitoring of blood glucose and lifestyle modifications, followed by oral medication or insulin if target blood glucose levels are not achieved. Consuming a diet with a lower glycemic index and physical exercise helps manage GDM. Effective management improves the mother's health, reduces perinatal morbidity, and lowers the risk of GDM in any subsequent pregnancies.

Most GDM causal factors—like age, ethnicity, and family history—are beyond a patient's control. However, patient counseling on lifestyle interventions such as healthy eating, regular exercise, maintaining a healthy weight, and drinking plenty of water can drastically reduce the onset of type 2 diabetes after a GDM pregnancy.

Henderson says, "Since pre-pregnancy overweight/obesity is known to be associated with gestational diabetes, the focus needs to be on achieving a healthy weight before conception."

However, lifestyle interventions are not enough for some patients to prevent GDM. Research shows that many South Asian women in urban settings developed dysglycemia —abnormalities in blood glucose levels—within two years of childbirth. So, alternative approaches are required to treat rising GDM in South Asians, combined with early postpartum screening for type 2 diabetes. And long-term follow-up with GDM patients is crucial.

There are some barriers, too, in the treatment of GDM. Some providers are not well-trained to handle the complications surrounding GDM or often do not understand the increasing pool of diverse patients. For patients, there are different difficulties. Apart from lifestyle changes, insurance might not cover lifestyle intervention classes offered by their doctors during their gestational diabetic pregnancy or provide enough glucose strips and insulin needed to manage their symptoms.

"Increasing awareness of GDM among populations of patients who are at greater risk of developing GDM is important," said Sarkar. Such an approach would benefit the patients and their health-care providers in the long run.

Getting diagnosed with gestational diabetes can be scary and confusing for any expectant mother. Knowing there could be a genetic component to it is like living with a silent threat. But proper lifestyle guidance can go a long way. Therefore, to prevent gestational diabetes, a better understanding of its causes is all the more critical. For a long time, patients and providers have focused on the traditional risk factors, but now is the time to explore the genetic and epigenetic causes of GDM, and to develop new ways to treat gestational diabetes as U.S. demographics shift.

Tulika Rastogi is co-founder of SciAdvis, a scientific consultancy, and a senior intellectual property consultant at Intricate Research. She is also an Indian Patent Agent and a freelance science writer.