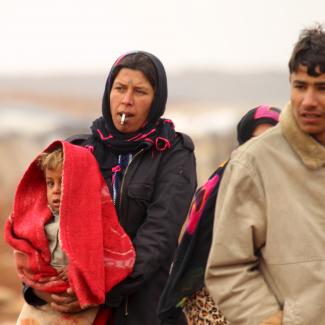 An internally displaced woman carries a child while smoking a cigarette inside a refugee camp in the Hama countryside, Syria, on January 1, 2016. REUTERS/Ammar Abdullah
by Adrianna Murphy and Éimhín Ansbro July 28, 2022

Russia's escalation of its war in Ukraine has created the largest displacement of people anywhere in 75 years. Over 12 million people in Ukraine, almost a third of the country's population, have been forced to leave their homes. Of these, seven million are estimated to be internally displaced, while the remaining have crossed country boundaries as refugees.

Hundreds of humanitarian organizations are responding to the health care needs of this displaced population. Prominent among these needs is care for common chronic noncommunicable diseases (NCDs). NCDs were already the biggest contributor to disease burden in Ukraine. Before the escalation on February 24, roughly a third of people in Ukraine had hypertension, 7 percent had diabetes, and cardiovascular disease was the leading cause of death. The crisis has likely exacerbated these conditions by increasing negative coping mechanisms, like smoking and alcohol consumption, and disrupting access to health care and medicines.

Before the escalation on February 24, roughly a third of people in Ukraine, around 10.8 million, had hypertension

Unlike most communicable diseases, chronic NCDs require continuous and long-term access to care. Effective care for displaced people with NCDs requires that their condition be identified quickly, that they have continuous access to affordable essential medicines which they take daily, and that they are monitored routinely at intervals determined by the severity of their condition. A gap in management or drug treatment for many NCDs, for example, dialysis for those with kidney failure or insulin for people with insulin-dependent diabetes, can be a matter of life or death. Maintaining effective care for those displaced in Ukraine in the war is a major challenge. Facilities have been destroyed, supply chains severed, and medical professionals are among those forced to flee.

For people who leave Ukraine as refugees, access to continuous NCD care can be challenging both during flight and on arrival in the host country. Refugees may experience language barriers while navigating host country health systems and during consultations with clinicians. They also rarely travel with medical records and frequently move from place to place, further complicating the provision of continuous care. The Ukraine war highlights an urgent need for the global health community to devote more resources and attention to the problem of NCDs in crisis-affected populations.

The war in Ukraine is not the first time that humanitarian health organizations have faced the challenge of delivering NCD care. Some humanitarian actors recall first encountering NCDs on a large scale during the Yugoslav Wars of the 1990s. Others point to the 2004 Indian Ocean Tsunami. For the United Nations High Commissioner for Refugees (UNHCR), the UN agency responsible for providing aid and protection to refugees and forcibly displaced people, NCDs started appearing on the agenda around 2008 during the Iraq War. Hundreds of thousands of people were fleeing Iraq to towns and cities in neighboring Syria, Lebanon, and Jordan.

Before this, most conflicts—the majority occurring in lower-income countries—had resulted in large settlements of refugees in designated camps. The health response to those crises was dominated by communicable diseases associated with overcrowding in camps, and poor water and sanitation infrastructure.  Malaria, measles, cholera, and malnutrition were common. With the Iraq War, UNHCR was responding for the first time to a dispersed, mostly urban refugee population, with different health needs. Refugees fleeing Iraq were older, on average, more likely to smoke, and more likely overweight. They were more likely to have or develop NCDs than to be at risk of communicable diseases or nutritional deficiencies, and their dispersion in urban areas made disease detection and continuity of care very difficult.

UNHCR and its implementing partners faced the challenge of responding to NCDs without established guidance or tools. Leading health and humanitarian organizations—the World Health Organization (WHO), Doctors Without Borders (MSF), the International Committee of the Red Cross, International Rescue Committee (IRC)—all had standard protocols for managing communicable diseases, malnutrition, sexual and reproductive health, and a growing body of evidence for mental health, in humanitarian crises, but guidance and medications for NCDs were limited. The Intra-agency Emergency Health Kit, initially developed by the WHO in 1984 to provide sufficient essential medicines for a population of 10,000 for the first 3 months of crisis response, included a small amount of NCD medications but neither the types nor the quantities required to treat a population with a high prevalence of NCDs. NCDs were simply not perceived as a priority among humanitarian actors. Indeed, the question of whether humanitarian organizations should be responsible for NCDs at all was, and remains, debated. Many humanitarian actors consider their priority to be emergency health care and the chronic needs of those with NCDs outside their remit.

Since then, NCDs have continued their rise as a problem in crisis-affected populations, most prominently with the decade-long war in Syria. The growing disease burden of NCDs globally, the increased number of conflicts in higher-income countries, the protracted nature of many conflicts and thus the longer presence of humanitarian actors, and a greater number of internally displaced people compared to refugees, all mean that humanitarian actors are increasingly called on to respond to NCDs. They have had to do so in contexts similar to those seen in Ukraine today, with disrupted health services and populations on the move.

Attention among humanitarian actors to NCDs has also increased. Over the last two decades, agencies have worked to adapt their models of health care to address the chronic care requirements of NCDs. In recognition of the need for better tools to guide their responses, in 2015 UNHCR, WHO, MSF, ICRC, IRC, the International Federation of the Red Cross and Red Crescent Societies, International Medical Corps, Primary Care International, and HelpAge International formed an informal interagency working group on NCDs in humanitarian settings, with the aim of working together to generate and share new knowledge on the topic. The group exists today and meets twice a year. Since its formation,  other humanitarian actors have joined as members. The group has been productive. In 2016, MSF published the first humanitarian programmatic and clinical guidelines on the diagnosis, treatment, and management of common NCDs in crisis settings.

Also in 2016, the WHO created an NCD kit for emergency settings, providing essential medicines and medical devices for the primary-care level management of hypertension and cardiac conditions, diabetes and endocrine conditions, chronic respiratory diseases, and mental health and neurological conditions. IRC and the WHO evaluated the kits in Libya and Yemen in 2019. The kits played a vital role in supporting continuity of care for those with NCDs in both countries but could be improved further through better assessment of the needs and capabilities of local health systems pre-deployment. The WHO is using the lessons learned to revise the kits. In 2020, IRC and UNHCR, supported by the informal working group, jointly published operational guidance for integrating NCD care into humanitarian responses. IRC also developed PEN-H, a WHO Package of Essential NCD interventions (WHO-PEN) adapted to the management of the most prevalent NCDs in humanitarian settings—cardiovascular disease (including hypertension), diabetes, and chronic respiratory disease. PEN-H includes clinical guides and protocols, self-care guides, and a facility readiness checklist; its use has yet to be evaluated.

While humanitarian actors are paying more attention to NCDs, progress in building the evidence base to support their responses has been slow. In 2013, a review of published research on health interventions in humanitarian crises in low- and middle-income settings was conducted by the London School of Hygiene and Tropical Medicine (LSHTM), the Harvard School of Public Health, and the Overseas Development Institute. It found only eight studies on NCD interventions. For comparison, the same review identified 151 papers on communicable diseases and 77 on nutrition. Since then, some more funding for NCDs in crises has been available, and research in this area has increased. There have been studies to investigate the effectiveness of various innovations in NCD care delivery including multidisciplinary primary care teams to better manage people with multiple NCDs and mental health needs; task-shifting to non-physician health workers for patient follow-up; the use of remote consultations; simplified treatment guidelines; and mobile clinics.

Despite the increase in research, however, an updated evidence review of NCD interventions in crises published last month revealed that major gaps remain. The review, led this time by Johns Hopkins Center for Humanitarian Health, identified only 15 studies published since the 2013 review and these were of variable quality. We don't yet know enough about the cost-effectiveness of primary care approaches for NCDs in crisis settings, mechanisms for financing this care, and how to ensure the sustainability of NCD programs delivered by humanitarian actors when those actors eventually leave. Research has also been limited almost exclusively to conflicts in the Middle East, with very little known about NCD care delivery in other types of crises (for example, natural disasters) or in countries of Africa or Asia, where NCD prevalence is high and growing. As climate change continues to disrupt ecosystems and livelihoods around the world, bringing with it further conflicts and natural disasters, these countries are particularly vulnerable.

Addressing these gaps in evidence will be difficult as research funding for NCDs in humanitarian crises is scarce. This year, an analysis was conducted of Official Development Assistance (ODA) disbursements for health from 2010-2019, led by LSHTM and King's College London. (ODA is international government financial aid specifically targeted at the economic development and welfare of developing countries, including displaced populations.) Between 2010-2019, only 0.02 percent of ODA was allocated for activities related to NCD management among refugee populations; and nothing for internally displaced people. For research on the prevention and control of NCDs, no funds were allocated for either population.

While not the first time the humanitarian community has faced the challenge of delivering care for NCDs, the war in Ukraine has brought this issue to the forefront. For the first time the WHO, in planning its role in the response, involved the WHO NCD Department from the beginning. It is also convening a thematic working group on NCDs as part of its coordination of the Health Cluster responding to the war in Ukraine. The cluster approach is a coordination mechanism for responses to humanitarian crises, where each cluster is led by a different agency and aims to support technical capacity and ensure the availability of expertise and materials. For the longer term, the department has also embarked on a review of WHO operational responses to NCDs in crisis settings, and of the broader evidence base on NCD burden and responses in crises globally. Their goal is to develop new operational guidance to support all countries in strengthening their health systems, and to be better prepared to respond to NCDs in crises.

It is vital that in Ukraine as well as in other emergencies, we support this and other initiatives by committing more resources to document, evaluate and share the experiences of those responding to NCDs, to continue improving our knowledge and minimizing the added death toll from NCDs among crisis-affected populations.

Adrianna Murphy is associate professor of health systems research and policy at the London School of Hygiene and Tropical Medicine (LSHTM). Her research focuses on policies to improve access to care and medicines for noncommunicable diseases in low-income and crisis-affected settings. She is co-director of the Centre for Global Chronic Conditions at LSHTM.


Éimhín Ansbro is Research Fellow in Noncommunicable Diseases (NCDs) in Humanitarian Settings at the London School of Hygiene and Tropical Medicine (LSHTM), and a family medicine physician in Ireland. Her research is on models of care for NCDs in crisis-affected settings, in particular hypertension and diabetes. Prior to LSHTM she worked for Médecins Sans Frontières.