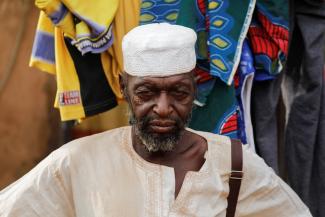 Boureima Dicko, 70, who fled attacks by Islamist militants in northern Burkina Faso, waits at a camp for internally displaced people in Ouagadougou, in central Burkina Faso, January 29 , 2022. REUTERS/Zohra Bensemra
by Benedetta Armocida and Beatrice Formenti May 17, 2022

Imagine an older woman living alone in a rural area. Her sons live in a city far away, but she prefers the quiet of the countryside. Every morning, she wakes up at 7 a.m. and takes six pills for various diseases. She measures her blood sugar, gives herself a shot of insulin, and eats breakfast while watching the news. Severe arthritis and a previous hip injury have limited her ability to move, so she spends much of her day seated.

Now imagine this woman caught in a war. In an instant, normal everyday life is flattened—communications, services, and infrastructure fall like dominoes. Since the woman has no family living nearby, she is unable to get food during the few hours of the day when there is no curfew. She can no longer take her medicine because the local health clinic is closed, and the nurse who once assisted her is away helping people injured in the war.

The social and health repercussions of conflict and war loom for millions of elderly people around the war, including about 7.4 million senior citizens in Ukraine, 3.6 million older people in Ethiopia, 800,000 older people respectively in Yemen and Syria, 250,000 of the elderly Palestinian population, and many more.

In Ukraine, 99 percent of older adults don't want to evacuate their homes, despite the war

The world is aging rapidly, not a new phenomenon. In 2020, one billion people worldwide were 60 years or older—about 13 percent of the total population. By 2050, one out of five people will be over 60, and more than 80 percent will live in low-income countries affected by humanitarian crises—including conflict, natural disaster, and famine—making these numbers a major concern. While the General Assembly of the United Nations has recognized older adults as a vulnerable group in humanitarian crises, traditionally, this population has not been prioritized for humanitarian assistance, and humanitarian responses have largely overlooked their needs.

Despite global commitment, evidence still indicates that older adults face formidable barriers to accessing health services in low- and middle-income nations during humanitarian crises. A dramatic example is the current war in Ukraine. The conflict in Ukraine is considered the "oldest" humanitarian crisis in the world given the large number of older adults who have been affected by it.

At this time, an older person living on the outskirts of Irpin, Mariupol, or Bucha, Ukraine, with a chronic illness hasn't been able to access medications for chronic illnesses, such as insulin for diabetes, and they have probably been rationing food. According to HelpAge International, a non-profit organization, one out of three older adults in Ukraine is in urgent need of medications and treatments for chronic illnesses. Ukraine was also experiencing an increase in COVID-19 cases before the start of the conflict, and older adults are most at risk for hospitalization and death from this disease.

Since the beginning of the war, the World Health Organization has also been warning of extreme shortages of medical oxygen, a potentially lifesaving treatment for COVID-19 patients, as well as people with HIV and tuberculosis.

Older displaced people can experience common health conditions, too, including hypertension, mental health problems, gastrointestinal issues, heart and respiratory diseases, diabetes, and cancer. They are also more susceptible to dehydration, hypothermia, and hyperthermia. And their health can be compromised by poor diet and nutrition.

By 2050, one out of five people will be over 60, and more than 80 percent will live in low-income countries affected by humanitarian crises

Even under normal conditions, elderly people may have difficulty accessing health care due to mobility and cognitive challenges. During a crisis, health care access can become even more difficult to manage if medical facilities shut down or are destroyed, but also if, for example, someone loses a cane or a walker or a pair of glasses. There may not be a family member available to help them get care. For others, war brings financial hardship and an older person may lack the money to pay for a medical appointment or medicines.

Studies from Africa, Asia, Latin America, and the Middle East reveal that many older adults affected by natural disasters, conflict, or socioeconomic crises are struggling with food insecurity, access to sanitation, and income.

Humanitarian aid providers should adopt universal comprehensive care systems, in which older persons who are displaced receive care and support services according to their degree of dependency and disability. These should include assistive technologies such hearing aids, wheelchairs, and canes.

Compared to other people who are caught in conflict, older adults are less likely to escape. During a crisis, evidence shows that older people are more likely to be left behind due to limited mobility, disability, ill health, or weakness when the rest of their community is displaced. Family members may leave their older loved ones at home due to concerns that they would not be able to survive the journey to a safer place. Older people may also choose to remain at home. In the current Ukraine war, HelpAge International reports that 99 percent of older adults don't want to evacuate their homes. But deciding to stay in a conflict zone can put an older person at risk for experiencing violence and intimidation.

Seniors who decide to flee also face many risks. They may be separated from their family and become isolated and abandoned as a result. While escaping war, older adults may experience exclusion and discrimination, erosion of family and traditional support systems, difficulty accessing information and documentation, of basic health and social services. Accessing medication is also a challenge for elderly people who become refugees. HelpAge International interviewed 105 older people who crossed the Ukraine-Moldova border during Russia's current attack on Ukraine. Among this group, 28 percent of people reported that they needed medications for diabetes, blood pressure, and pain relief, and 22 percent reported living with a disability.

Self-rated health, well-being, and mental health status tend to be lower among older people who have migrated compared to the general population

An additional challenge during a humanitarian crisis is when older people become displaced within their own countries—a problem that is increasing. Globally, projections show that forced displacements are on the rise. At the end of 2020, 82.4 million people were forcibly displaced as a result of persecution, conflict, violence, human rights violations, or events that seriously disturbed public order. Approximately 4 percent of all displaced people are estimated to be older adults, though this might be an underestimate due to missing data. These numbers are expected to rise as the aging population increases globally, and if displacement persists.

On average, people who migrate to another country live away from their homes for 20 years, and people who are internally displaced are often away from home for more than 10 years. As a result, many displaced people will age far away from home, reaching old age in rescue shelters or in host communities, often without access to the health care they need. The United Nations High Commissioner for Refugees (UNHCR) recognizes older people who are internally displaced as some of the most at-risk individuals, characterizing them as "persons with special needs."

Once conflicts simmer down, older people who left their homes may face major hurdles if they want to return as they try to carry their possessions back and rebuild their houses in their homeland. They may feel disoriented upon their return to a home that has been destroyed or changed by a crisis, living far from relatives, and by a long and physically taxing journey home. ​​

If they are not well enough to return home, they may remain in the locations they were displaced to during a conflict or disaster. One UNHCR report describes the phenomenon of older people remaining behind in camps as "negative social selection." Some reception centers in Central and Eastern Europe have actually become "geriatric wards in all but name," according to the report.

Self-rated health, well-being, and mental health status tend to be lower among older migrants compared to the general population reflecting the long-term effects of traumatic experiences.

The right to health during the migration process is a fundamental human right and must be protected. All people have equal value and dignity, and no one should be left behind. The intersection between migration and aging is a serious challenge that cannot be neglected.

Dr. Benedetta Armocida, MD,  is a medical doctor by background, with a master's in tropical medicine and global health, and currently a PhD candidate in global health at the University of Geneva.


Beatrice Formenti is a nurse by background and she is currently a research assistant at the UNESCO Chair "training and empowering human resources in low-income countries, at the University of Brescia.