Go to homepage
Healthy Birth—and Then What?
Gender 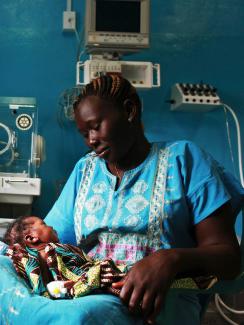 A woman holds her newborn in a nursery at the Juba Teaching Hospital in South Sudan on Apr 3, 2013, which had one of the world's highest maternal mortality rates then at 2,054 per 100,000 live births. REUTERS/Andreea Campeanu
by Jason Socrates Bardi February 14, 2020

Both times my wife was pregnant, whenever we told anyone the news, they would immediately ask three questions that were almost always exactly the same: When is the baby due? Is it a boy or girl? What are you going to name it?

I have often wondered at the significance of this. Were those three questions unique to our time and place—or were they timeless? Have parents everywhere, since the dawn of time been, asked some variation of those same questions, and if so, what does that indicate about the community experience of childbirth? More to the point, why do we focus so exclusively on the child?

New research suggests there may be room to improve our focus on the mother’s health in the critical 24-hour period after delivery, when most deaths due to complications from pregnancy occur. According to the World Health Organization (WHO), more than 800 women die every day from complications linked to pregnancy and childbirth—303,000 women in 2015 alone—most from causes that are completely preventable or treatable. Maternal mortality was historically neglected as a global health problem, but the WHO enshrined improving maternal health several years ago as one of its Millennium Development Goals. Worldwide efforts to address this issue has made substantial progress over the last few decades—saving hundreds of thousands of women's lives every year. According to UNICEF, maternal mortality worldwide fell by 38 percent from 2000 to 2017.

In sub-Saharan Africa, which has some of the world’s highest rates of maternal mortality, one approach to improving outcomes for pregnant mothers and their newborns in recent years has been to increase women’s access to delivery rooms at health care facilities. As measured by live births in those facilities, this approach has been a success. Today more than half all births in Africa take place in such places.

“Thousands and thousands of additional births annually are happening in these facilities,” said Lenka Benova, a social scientist who studies the issue at the London School of Hygiene and Tropical Medicine and Institute of Tropical Medicine in Antwerp, Belgium. The assumption is that mothers are better off delivering in facilities than at home because the care is better, she said, but is it always true?

“That’s not always the case,” Benova said. “Women who make an effort to come to a health care facility are not always receiving high quality of care,”

In a recent article in the journal PLOS Medicine, Benova and her colleagues surveyed the wide variations in postpartum care for women giving birth at health care facilities. Looking at demographic and survey data collected from 2000–2016 across thirty-three countries in sub-Saharan Africa—from Ethiopia to Lesotho and from Madagascar to Côte d'Ivoire—they found huge variations in the postpartum care women received from facility to facility and from country to country. In some areas, more than 90 percent of women were checked by a health care provider before they left their facility, but in some places only 25 percent of women received such a visit.

Overall, Benova said, “Three tenths appeared to have left the facility without a basic postpartum check.”

This is a significant finding, said Mae Dirac, an expert who is a family physician and researcher at the University of Washington's Institute for Health Metrics & Evaluation (IHME), because many of the complications that are fatal or have long-term health consequences for moms after giving birth are not immediately apparent during delivery.

“Even the healthiest mother should have some basic checks performed after delivery,” said Dirac, who was not involved in the research. “This study showed us that even if a mother delivered in a facility, there are still recommended, important parts of her care that are not consistently being delivered.”

Recommended guidelines hold that women should be given checks every four hours after giving birth, and evidence shows that the lives of many women could be saved by checks as simple as routine vitals to look for things like spikes in blood pressure or a basic physical exams to look for the early signs of infection after a Cesarean section, hemorrhages, blood clots, or the onset of postpartum preeclampsia.

The study also showed large variations in how long mothers stayed after giving birth, with some staying no more than a few hours, which Benova said doesn’t seem long enough. And while some women who did stay longer had prolonged stays tied to treating their complications, some were waylaid for other reasons—like billing disputes. Some facilities may be overcrowded or understaffed, Benova added, leading to pressure to discharge young mothers after they give birth, which may be one reason why some mothers included in the study left the facility where they had just given birth prior to receiving a postpartum check. Benova and her colleagues are currently taking a deeper look at the data collected in the countries of Tanzania and Guinea to understand how and why these pre-check departures occur and asking what sort of structures and guidelines exist across those countries.

The bottom line, Benova said, is that women’s lives can be saved in the 24 hours after birth and, in general, mothers and children should be treated as a unit with facility-based care focused on both—not just one or the other.

Incidentally, maternal mortality is a significant problem in the United States as well, and occasionally it makes major headlines when women who are public figures suffer big health scares. That happened in 2017 when Serena Williams almost died from postpartum complications after giving birth to her daughter Olympia. The same year Beyoncé underwent a harrowing ordeal giving birth to her twins Rumi and Sir. Both cases have helped to highlight the puzzling problem of high maternal mortality in the United States, and both women have been universally lauded for their bravery at speaking out publicly.

EDITOR'S NOTES: Mae Dirac, the physician interviewed for this story as an outside expert, works at the University of Washington's Institute for Health Metrics & Evaluation (IHME), which collaborates on Think Global Health. The story was corrected from an earlier posting in which Dirac was identified as an obstetrician. She is in fact a family physician who provides routine obstetric care as part of full-spectrum family practice.