Go to homepage
What to do About Type 2
Environment 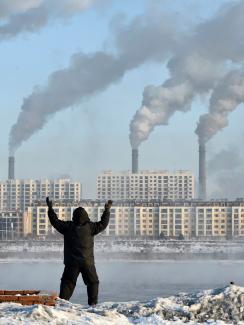 Factories emit smoke in Jilin province, China, across the Songhua River from where an elderly man exercises on the morning of Feb 24, 2013, after Chinese authorities announced plans to curb pollution. REUTERS/Stringer
by Katherine Leach-Kemon and Theo Vos February 4, 2020

Type 2 diabetes silently takes hold in the body over a matter of years, compromising the body’s ability to regulate blood sugar. By the time the disease is diagnosed, organ damage has often already occurred, and may be irreversible, even if the disease is well controlled thereafter. With similar stealth, the rising tide of type 2 diabetes has surprised experts in many nations around the world with its speed, magnitude, and costliness. Aging, population growth, obesity/overweight, air pollution, unhealthy diets, smoking, and sedentary lifestyles have all helped drive up the number of cases of type 2 diabetes.

of total health spending in adults goes to type 2 diabetes

Type 2 diabetes was the 10th-largest killer in the world in 2017, up from number 15 in 2007. It has now surpassed malaria and breast cancer, according to the Global Burden of Disease study, which is led by the Institute for Health Metrics and Evaluation (IHME). Once a person develops type 2 diabetes, they are at greater risk of blindness, amputation, kidney failure, cardiovascular disease, and death. The financial cost of diabetes (the vast majority of which is type 2) is staggering: according to the International Diabetes Federation, the world spent $760 billion on it in 2019 alone, which represents 10 percent of total health spending in adults.

In 2017, obesity/overweight was the most important risk factor for type 2 diabetes. Despite billions of dollars in investment in identifying solutions to tackle obesity and overweight, however, effective solutions remain largely elusive. With obesity continuing to increase, more research is needed to identify more effective interventions. A 2020 study published in Nature noted that eating healthy foods, primarily those featured in the Mediterranean diet, such as fruits, vegetables, nuts, beans, and whole grains, seems to prevent obesity.

Most weight loss interventions only last for a short time, however.

To promote healthier diets, food policy leaders recommended in an article in the British Medical Journal sweeping changes to current food systems, such as revamping food, agriculture, and trade policies to encourage production of healthy foods instead of unhealthy foods. The authors also recommended government regulation of unhealthy food as well as nutrition education, banning marketing of unhealthy food to children, and subsidizing healthy food and taxing unhealthy food. Most weight loss interventions only last for a short time, however. For those with extreme obesity, numerous studies have demonstrated the cost effectiveness of gastric bypass surgery for addressing obesity, yet these interventions remain out of reach in many low-income settings.

When we think about the harm of air pollution we tend to think of diseases such as lung cancer, asthma and chronic obstructive pulmonary disease. What is less well known is that air pollution is also an important risk factor for type 2 diabetes. In 2017, air pollution was tied to 27 percent of premature death and poor health from type 2 diabetes globally.

Compared to obesity, there are better examples of countries that have succeeded in reducing the risk of air pollution.

Air pollution may contribute to diabetes by affecting the body’s sensitivity to insulin. Low insulin sensitivity is characteristic of Type 2 diabetes, and those with the condition need drugs or insulin injections to stabilize blood sugar. Air pollution comes from sources such as coal-fired power plants, vehicle emissions, and wood-fired cook stoves. In countries covered by large swaths of desert, such as parts of North Africa and the Middle East as well as sub-Saharan African countries bordering the Sahel, a major source of air pollution comes from dust storms. Compared to obesity, there are better examples of countries that have succeeded in reducing the risk of air pollution. Take London, for example, which was plagued by “pea soup” fog in the 1950s, or China, which succeeded in significantly reducing air pollution [PDF] through aggressive action on coal and industrial and vehicle emissions as well as investments in lower-emission energy sources—though China still exceeds WHO air quality guidelines and targets.

Smoking, secondhand smoke, and lack of exercise are also linked to type 2 diabetes, but contribute to less premature death and poor health than obesity, air pollution, and diets low in whole grains.

Curbing obesity, addressing air pollution, promoting smoking cessation, as well as encouraging healthy eating and exercise are key issues in the fight against type 2 diabetes worldwide. While there is no single silver bullet, combating air pollution offers a promising new approach to a rapidly growing crisis. In parallel, interventions to encourage healthy eating, promote physical activity, and continued research to identify new effective tools in the fight against obesity are urgently needed.

EDITOR’S NOTE: The authors are employed by the University of Washington’s Institute for Health Metrics and Evaluation (IHME), which leads the Global Burden of Disease Study. IHME collaborates with the Council on Foreign Relations on Think Global Health. All statements and views expressed in this article are solely those of the individual author and are not necessarily shared by their institution.

To Encourage Healthy Eating, Use the Carrot, Not Just the Stick