Go to homepage
To Decolonize Global Health, We Must Examine the Global Political Economy
Trade

To Decolonize Global Health, We Must Examine the Global Political Economy 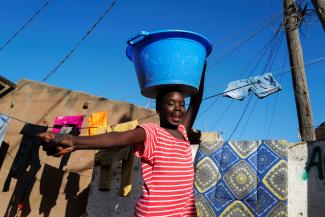 A girl carries a bucket with laundry on her head while heading home as the spread of the coronavirus disease continues, in Yoff neighbourhood, Dakar, Senegal on January 26, 2021. REUTERS/Zohra Bensemra
by Pooja Yerramilli February 22, 2021

Since the COVID-19 pandemic began, commentators have observed that Africa has fared better than other regions, attributable in part to the Global South's expertise in outbreak control. This has amplified calls to decolonize global health, regarding where, how, and with whom knowledge is generated and appreciated. While these narratives are valid, they are also one-dimensional: focusing solely on COVID-19 cases and neglecting the broader toll of the pandemic in "resource-limited" countries.

African countries face collective financial losses from the pandemic of over $115 billion, which will push 40 million people into extreme poverty. Lockdowns and disrupted health care will lead to rising cases of other infectious diseases like malaria, tuberculosis, and HIV/AIDS, doubling deaths from them. There will be enormous burdens of unmanaged non-communicable diseases like heart disease, which can have direct long-term complications but also increase risk of dying from COVID-19. Meanwhile, differential access to COVID-19 vaccines globally will amplify health disparities.

These costs demonstrate that we cannot talk about decolonizing without discussing colonialism's most fundamental legacy in global health: a political economy that prioritizes financial sustainability over access to health care in countries where "resource limitations" have always been externally imposed.

The Rise of Commercial Determinants of Health

In his book The Divide, anthropologist Jason Hickel argued that aid, in its current form, cannot compensate for the costs of our global economy on poorer nations. He cites a recent study that showed that the net financial outflows from poorer nations — including debt with interest, profit repatriation from foreign direct investment, and capital flight— are at least $3 trillion per year, 24 times the global aid flowing in the opposite direction. And Hickel wrote that this figure is likely an underestimate, since it leaves out the costs of the global political economy on human development, from slave trade to climate change.

Neither does the calculation include the effects of trade on human health and productivity — in other words, the commercial determinants of health (CDOH). CDOH are defined as "strategies and approaches used by the private sector to promote products and choices that are detrimental to health." While the relationships between specific trade policies and health are complex, CDOH is a useful framework for understanding a global political economy that, on the whole, prioritizes "wealth creation over health creation."

Aid, in its current form, cannot compensate for the costs of our global economy on poorer nations

A striking example is the tobacco industry. While the United States began implementing domestic policies to curtail tobacco consumption, U.S. trade negotiators began pressuring other countries to open their markets. In fact, a 1990 lawsuit deemed Thailand's restrictions on U.S. tobacco imports with harmful additive chemicals discriminatory and illegal. Nations that attempt to regulate the industry through public health measures like marketing restrictions are usually expected to bear the direct and indirect costs of litigation, not these companies' countries of origin. Australia famously spent $39 million defending its plain packaging laws – money that countries in the Global South cannot easily afford.

Simultaneously, intellectual property rights agreements have threatened affordability of medications worldwide. While product and process patents incentivize innovation, they also decrease the ease of production of low-cost generic alternatives to new branded medications. This is particularly problematic for new essential medicines for CDOH-associated chronic diseases like cancers. While there are loopholes to facilitate access to medicines in the short-term, such as compulsory licensing, these provisions are applied ad hoc and do not provide long-term, structural solutions.

The result has been a worsening burden of non-communicable diseases, on top of an existing burden of infectious diseases, in countries that often cannot afford the medications to treat either of them.

The Demotion of the Public Sector

At the same time that some countries were pressured to open their markets, many were pushed to reduce public spending, including on health. As historian Vijay Prashad wrote in The Poorer Nations, in the 1970s, petrodollar-rich U.S. banks pushed low-interest loans onto newly independent countries. The global recession in the 1980s, however, led to debt crises across Latin America and Sub-Saharan Africa, as they saw interest rates on their loans skyrocket and their export prices plummet. In part to facilitate repayment, affected countries cut government support for social services, often under pressure from their lenders. Through Structural Adjustment Programs, the IMF and World Bank extended loans to indebted countries across Latin America, Sub-Saharan Africa, and Asia conditional on austerity measures like public expenditure reductions, privatization, and economic liberalization.

It is not within non-governmental actors' mandates to design comprehensive, cohesive, and equitable health systems. Their short-term, unpredictable, and piecemeal commitments make it challenging for governments to build long-term, harmonized health sectors. They often channel resources — money, equipment, or staff — toward the initiation and sustenance of their projects or facilities over government ones. In doing so, they challenge budget coordination for health.

If "resource-limited" countries' net outflows have always exceeded inflows, how can they ever build sustainable and adequate health systems?

Social entrepreneurship, when deployed hastily, also fits this paradigm. Social entrepreneurship can promote the notion that individual initiative can solve health-care challenges, even where fundamental requisites for success, such as education and transportation, are absent. It often accepts a political economy that diminishes state responsibility.

In sum, in global health, we have largely infantilized governments and their constituents. We have exported models for health systems created in the Global North, that promote accountability to money over accountability to society. We limit the role of governments in protecting and investing in health, in part because we deem public provision in donor-dependent countries financially untenable. We lower health service targets to comply with predetermined budgets, denying people access to basic health care. We promote market or non-governmental solutions to fill in the gaps through unpredictable projects that do not integrate. We emphasize financial sustainability, not access to health care, as the end goal.

But when we appreciate the larger political and economic contexts, the idea of financial sustainability becomes fraught. If "resource-limited" countries' net outflows have always exceeded inflows, how can they ever build sustainable and adequate health systems?

Leaders from the Global South have long provided answers. As Prashad chronicled in his book, many of these leaders attempted to create a more just political economy. Through the Non-Aligned Movement, they pushed to democratize international institutions like the United Nations. Through their vision for a New International Economic Order, they promoted alternate economic policies that they believed could empower nascent Southern industries but were opposed by the North. Leaders like Julius Nyerere, the first President of Tanzania, advocated for wealth transfer across and within nations. They appreciated that for unencumbered empowerment of the Global South, the uneven tolls of our political economy must be equalized.

Based on their frameworks, it stands to reason that decolonizing global health requires us to question our concepts of aid and sustainability. "Aid" implies voluntary relief; "financial sustainability" ignores the political and economic oppression of developing countries. But after centuries of power imbalance, perhaps what we owe the Global South is a reimagining of our global political economy alongside financial compensation for countries' historical and ongoing outflows.

Likewise, perhaps our agenda should go beyond democratizing. Perhaps it should advocate for a political economy that truly prioritizes human wellbeing; and in the meantime, push for debt cancellation (following the lead of groups like Campaign Against Racism) and predictable, unearmarked budget support to enable governments in the Global South, and the people to whom they are accountable, to finance health systems they imagine.

As many experts argue, at this moment of health and financial crisis, it is urgent to decolonize global health. But the history of the movement suggests that we ought to heed its calls for fundamental change — by critically questioning the "resource limitations" that continue inhibiting health-care access around the world.

Pooja Yerramilli (she/her/hers) is a global health physician at Massachusetts General Hospital and a clinical fellow at Harvard Medical School.

To Decolonize Global Health, We Must Examine the Global Political Economy