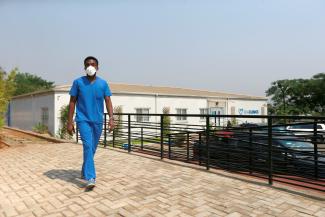 The story of epidemics and pandemics in Africa is wrought with narratives of inequality, discrimination, inequity, and lessons not learned. Despite hundreds of thousands of deaths and huge economic losses, African political leaders have steadily made progress toward strengthening the continent's capacity to prevent, detect, alert, and respond to pandemics.

While the COVID-19 pandemic has shown that Africa still has a long way to go before it develops the appropriate and robust health systems required to effectively respond to national and international health crises, the African continent has demonstrated the strength and resilience of its people in the face of this unprecedented disease. Its response and resilience is partly, if not largely, due to the experiences from past epidemics and decisions and actions that have strengthened Africa's health architecture at the continental, regional, and national levels.

A report generated by the Africa Pandemic Resilience initiative (a partnership between Future Africa Forum and Pandemic Action Network) highlights the immediate challenges that the continent faces, such as the limited manufacturing capacity for diagnostics, therapeutics, and vaccines, and it provides a coherent package of sustainable and collaborative initiatives to finance and address them.

Following the 2014–16 Ebola outbreak in West Africa, which claimed an estimated 11,000 lives and cost an estimated $3 billion, African political leaders made the strategic decision to establish and officially launch the Africa Centres for Disease Control and Prevention (Africa CDC) in January 2017. This specialized technical institution of the African Union (AU) was tasked with ensuring the health security of Africa. African heads of state and governments also issued a declaration in July 2017 and committed to accelerating implementation of the 2005 International Health Regulations (IHR), a global legal agreement that aims to prevent and respond to the spread of diseases, with the goal of avoiding an international crisis. Since 2017, millions of dollars have been invested in Africa CDC by AU member states and African-led and international organizations. The leadership, coordination, collaboration, and technical support to AU member states by Africa CDC has been a game changer in the way the African continent has responded to COVID-19.

The importance of Africa CDC to the health security of the African continent and its people is no longer in question—Africa CDC was awarded autonomous status as a public health agency following the February 2022 African Union Summit.

African leaders have also supported efforts to develop another specialized agency of the AU, the African Medicines Agency (AMA), which was established in 2019 (though its roots go back even further) to improve access to quality, safe, and efficacious medical products (vaccines, therapeutics, and diagnostics) in Africa. The work of AMA expands on the efforts of the African Medicines Regulatory Harmonization (AMRH) initiative (2009) and will serve six main functions in the future—marketing authorization, inspection, market surveillance, safety monitoring, oversight of clinical trials, and quality control. These two continental institutions have a critical role in the continent's health security architecture and their success is contingent on continued commitment and support of African governments and financial institutions. Africa's health security is a function of national health security and for this reason it is incumbent upon all African governments to be accountable to their commitments to enhance health financing.

Most signatories to the 2001 Abuja Declaration are yet to raise their public health funding to 15 percent of total expenditure, and no AU member state currently meets the continental body's 2007 recommendation of committing 1 percent of GDP to research and development expenditure. On August 25, 2022, African health ministers adopted a new eight-year strategy to transform health security and emergency response by 2030, at the seventy-second session of the World Health Organization (WHO) Regional Committee for Africa, in Lomé, Togo. The WHO estimates that up to $4 billion is needed annually from international and domestic sources to fully fund core health security capacities in the region and better prepare for the next pandemic. This works out to around $3 per person annually.

Regional Economic Communities such as the Southern African Development Community (SADC), East African Community (EAC), and the Economic Community of West African states (ECOWAS) have shown leadership in spearheading and financing coordinated responses to the COVID-19 pandemic and will be expected to play an increasing role in ensuring that members of their economic communities are held accountable and adhere to commitments made particularly in health-related financing and planning.

Two and a half years into the COVID-19 pandemic, the health systems of many African countries continue to be stretched and the health workforce is overworked as countries strive to save lives and livelihoods. The African region reports the heaviest burden of public health emergencies in the world, with more than one hundred such events occurring every year. Most recently, on September 20, 2022, Uganda's Ministry of Health (MOH) declared an Ebola Virus Disease outbreak of the rarer Sudan ebolavirus which does not have any effective vaccines or therapeutics. While clinical trials are underway, the challenge remains of how to contain this outbreak in the absence of any effective vaccines or therapeutics.

Despite the impact of COVID-19 and multiple other health emergencies, one thing is for sure, Africa continues to build and strengthen its health security architecture and the results are becoming evident —a continent with growing capacity to prevent, detect, alert, and respond to pandemics. There is strong recognition from African leaders that pandemic preparedness is an essential component of an effective health system; and leadership during pandemics is an essential component of an effective governance system.

Shingai Machingaidze is an epidemiologist and public health specialist.