Go to homepage
For Young Men, Alcohol Does Not Have to Be a Death Sentence
Gender

For Young Men, Alcohol Does Not Have to Be a Death Sentence

For males ages 15 to 49, drinking alcohol causes nearly 10 percent of all years lost to death and disability 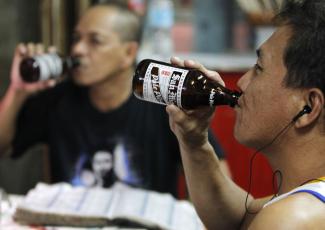 Drinking alcohol has been an indelible part of humanity for thousands of years. When and what people drink varies from culture to culture, from a pilsner (grain lager) in Germany and the Czech Republic, to an urwagwa (banana beer) in Rwanda and Burundi, or kumis (fermented mare milk) in Kyrgyzstan and Mongolia.

Alcohol use is often deeply embedded in routines of daily life and rites-of-passage, whether meeting for hoesik, an after-work gathering of colleagues in South Korea; drinking chirrinchi, a fermented beverage typically made from sugar and part of funeral traditions among Wayuu people in Colombia; or "wetting the baby's head" in the United Kingdom, when fathers go out to celebrate the birth of their child. Many people across the world tend to drink a bit too much, and no one drinks to excess more than young men.

Research findings on alcohol consumption, as part of the Global Burden of Disease Study coordinated by the Institute for Health Metrics and Evaluation, demonstrate this clearly. For young men between 15 and 49 years of age, drinking alcohol causes nearly 10 percent of all years lost to death or disability.

When comparing levels of alcohol consumption that cause minimal harm (the "minimum harm level") to the amount that people are actually drinking, globally, the average male consumes 3.3 daily standard drinks too many. The chart shows the level of alcohol consumption that would cause minimal harm compared to the average amount people are currently drinking. In 2020, 1.8 million deaths could have been prevented if people had not consumed harmful levels of alcohol.

Globally, roughly 38 percent of males between the ages of 15 and 49 are drinking harmful amounts of alcohol. This excess drinking is tied to many disabling conditions that can last for years or lead to premature deaths. For males aged 15 to 49, alcohol use is linked most strongly to substance use disorders and cirrhosis. It is also linked to many different types of injuries including vehicle crashes, gunshot wounds, and falls–-along with twenty-two other diseases. Which diseases and injuries occur due to drinking can also depend heavily on where a young male lives. For example, rates of health loss from road injuries due to alcohol consumption are highest in Thailand and Lesotho, while rates of health loss from alcohol-use disorders for young males are highest in Mongolia and El Salvador.

Where do young males have the highest rates of health loss caused by heavy drinking? Among those places hit hardest are high-income and high-middle income regions, countries, and territories, including Eastern Europe, Mongolia, South Korea, Taiwan, and Chile. These countries stand to reap the greatest benefit from policies that encourage people to drink less alcohol. At the same time, reducing drinking everywhere could lead to large improvements in young males' health globally.

Countries should take aggressive action to prevent more families from having to bury their loved ones. There are many effective policy-making options available to reduce drinking. For example, the World Health Organization (WHO) has reports available on which policies are the most cost-effective for reducing drinking across an entire country (WHO "best-buys"). One proven intervention to reduce road injuries and violence is limiting the number of hours alcohol is sold in stores. The WHO also endorses advertising bans as a way to cut alcohol consumption.

The study shows that young males continue to drink harmful amounts of alcohol. Excessive drinking leads to substantial health loss and alcohol use has been the top risk factor for death among males globally for the last three decades. Behind each of these statistics is an individual and their loved ones who are forced to live with a disabling illness or a tragic death. Regardless of the exact policies countries take to reduce disease burden due to alcohol use, reducing alcohol-related harms should be of paramount importance to leaders. Countries should waste no time in implementing policies that encourage people to drink less.

ACKNOWLEDGMENTS: The authors would like to thank Rebecca Sirull for fact-checking assistance and Ruri Syailendrawati for providing feedback on the draft.

Max Griswold is a policy researcher for the RAND Corporation and a PhD student at the Pardee RAND graduate school.


Dana Bryazka is a researcher at the University of Washington's Institute for Health Metrics and Evaluation, focused on forecasting tobacco policy scenarios.


Erin Mullany is a research manager on the Gender Equality Metrics team at the University of Washington's Institute for Health Metrics and Evaluation (IHME).