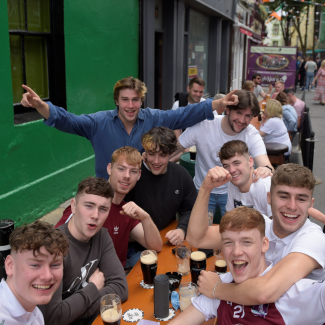 St. Patrick's Day has a special resonance for Ireland this year. For the first time since 2019, traditional parades and gatherings will take place in communities throughout the country during our public holiday on March 17. The celebrations were canceled in 2020 and 2021 because of the COVID-19 pandemic, but this year, the government granted an additional special public holiday on March 18, providing an opportunity for people to celebrate with friends and family. Ireland is welcoming many visitors to the island for our national celebration, as well. There will be plenty of music and sport—as the saying goes, "the craic will be mighty."

That famed good-time national identity, though, comes tinged with a recognition of the role of alcohol in our society. For some, there is an acceptance that alcohol is central to any occasion, from festivals to funerals, the extraordinary to the mundane. The facts, though, are stark. Ireland has the ninth highest per capita consumption of alcohol in Organization for Economic Cooperation and Development member countries, and the eighth highest rate of monthly binge drinking in the world. Such levels and patterns of use inevitably lead to a high degree of harm—nearly 15 percent of the population has an alcohol use disorder. The estimated societal cost of alcohol in the country is at least €3.7 billion annually. In Ireland, alcohol is linked to over 40,000 hospital admissions every year and takes an incalculable toll elsewhere, including in the home, workplace, and community.

Deaths from Alcohol Use

With such a significant alcohol burden in Ireland, understanding the extent of the problem is an important element in policy decisions. The Global Burden of Disease Study (GBD) is an enterprise supported by a team of more than 7,000 researchers in over 156 countries and territories including Ireland. The data captures premature death and disability from more than 350 diseases and injuries, by age and sex, from 1990 to the present, allowing comparisons over time, across age groups and among populations. Recent analysis of the GBD data by researchers in the School of Public Health at University College Cork of the alcohol burden in Ireland found that in 2019, there were an average of four deaths per day—almost 5 percent of all deaths. This equated to losing 62,237 Disability-Adjusted Life Years (DALYs) to alcohol. DALYs are a time-based measure that combines years of life lost due to premature mortality and years of life lost due to time lived in states of less than full health, or years of healthy life lost due to disability. The deaths are disproportionally borne by different age groups, with young and middle-aged males ages 15 to 49 having the largest health gap.

Previous measurements of alcohol-related deaths were based on data from death certificates, suggesting that 3.7 percent of all deaths in Ireland were related to alcohol. This is likely to be an underestimate, however, because an alcohol-related death is only recorded by the National Drugs-Related Death Index when very specific criteria are met in relation to wording on the death certificate or on medical notes.

The largest number of alcohol-related deaths arise from chronic liver diseases, followed by head, neck, and mouth cancers, and breast cancer. The data also suggested that 27 percent of suicides and self-harm incidents are alcohol related.

This research illustrates how results from modelling studies and existing data sources can differ. Neither is perfect, but both can help illuminate a problem.

Beyond the statistics are the lives of real people and families in Ireland, damaged and devastated by alcohol. The question remains—is Ireland destined to have an alcohol problem forever?

Discussions about alcohol and Ireland often have a fatalistic quality, involving assertions that alcohol is inherent to our culture. This ignores evidence of how alcohol use has varied over the past four decades based on availability, pricing, and marketing—all of these factors determine consumption. For example, there was a 407 percent increase in the number of supermarkets and other retail stores granted licenses to sell alcohol in the period from 1998 to 2018. Consequently, as alcohol sales moved from pubs to shops and the government loosened rules around selling groceries below cost, alcohol became more affordable and more widely available.

Marketing shapes our attitudes about alcohol and influences our associations with particular alcohol brands, too. Through sponsorships, alcohol companies link their products with sport or culture to a point where a brand can become part of national identity.

A Problem with a Solution

Despite these challenges, Ireland has been making progress addressing the burden of alcohol use. For example, legislators passed a law in 2018 that used a structured public health approach to confront the problem for the first time. The modest measures in the legislation are based on the World Health Organization's "Best Buys" for the prevention of noncommunicable diseases, such as controls on the main drivers of alcohol use—price, marketing, and availability. The measures have been implemented in stages, the most recent in January 2022 with the introduction of Minimum Unit Pricing (MUP). MUP sets a floor price for alcohol—10 cents per gram—meaning that a standard drink, such as a small glass of wine or a half pint of beer, must cost at least €1. Modelling of MUP suggests that there will be a reduction of around 200 deaths per year after 20 years of the measure being in place.

Vested interests have fiercely resisted the legislation, however. Many of the measures were watered down. With a loss of political momentum, some have no timeline at all for implementing the alcohol law, which includes controls on the content of alcohol advertising, a prohibition on advertisements being shown on TV and radio before nine o'clock at night, and health warnings on alcohol products.

The GBD data provides yet more evidence for the need to move forward with determination. Alcohol Action Ireland, the independent advocate for reducing alcohol harm, has been working with University College Cork researchers to draw policymakers' attention to the data and to highlight solutions for reducing the burden of alcohol use.

A case in point is the success which Ireland has made on reducing road deaths with the establishment of a Road Safety Authority (RSA). The RSA has taken a multi-pronged approach, focusing on licensing, vehicle roadworthiness, public campaigns, and enforcement of regulations. Road deaths dropped by 62 percent between 2005 and 2018. Examples such as these suggest the need for a targeted, state-sponsored alcohol office. The office would need to work to reduce alcohol harm and allocate resources to drive progressive alcohol policy development and implementation.

When COVID-19 recedes, perhaps there will be more space for the government to renew its focus on the prevention of needless illness and deaths. This St. Patrick's Day, rather than "drowning the shamrock," Ireland could give the green light to measures proven to reduce alcohol harm and save lives.

Sheila Gilheany is the CEO of Alcohol Action Ireland (AAI) an independent advocacy that works to reduce alcohol harm. Dr. Gilheany is a member of the Public Health Alcohol Research Group established by the Minister for Health in Ireland to advise on alcohol policy evaluation research.


Eunan McKinney is head of communications and advocacy at Alcohol Action Ireland.