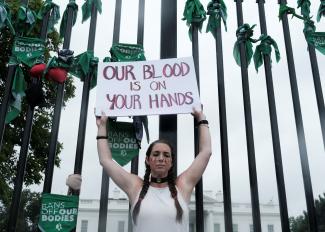 An activist attends a protest in the wake of the U.S. Supreme Court's decision to overturn the landmark Roe v. Wade abortion decision, in front of the White House in Washington, DC, on July 9, 2022. REUTERS/Michael A. McCoy
by David P. Fidler July 13, 2022

The U.S. Supreme Court term completed in June proved one of the most consequential sessions in recent memory. The court handed down major decisions on vaccine mandates, gun control, abortion, and climate change that affect public health, a policy realm already reeling from the COVID-19 pandemic. The rulings did not address foreign policy, but these cases have implications for U.S. engagement with global health.

The federal judiciary receives less attention than the legislative and executive branches as a domestic source of U.S. foreign policy. Federal courts decide cases that involve foreign affairs, but the courts are generally deferential to the president and to Congress, which tends to produce rulings that do not dramatically affect how the political branches conduct foreign policy.

The federal courts have been more important in foreign policy as an exemplar of an independent judiciary's role in maintaining the rule of law in a free society. U.S. promotion of democracy globally has supported judicial independence in other countries. The jurisprudence of federal courts has historically had global influence that few other judicial systems have achieved. This impact allowed the federal judiciary to contribute to the persuasiveness and attractiveness of American culture, values, and policies that purportedly create soft power for the United States in international relations.

Constitutional Rulings on Guns and Abortion

In cases involving the Constitution, the Supreme Court expanded the right to bear arms and eliminated the right to an abortion. The decision in New York Rifle & Pistol Association Inc. v. Bruen struck down a gun control measure after the mass shooting in Uvalde, Texas, triggered another national reckoning with gun violence—a long-standing public health concern. The Supreme Court's expansion of the right to bear arms brought accusations that it would produce more gun-related mayhem. The holding in Dobbs v. Jackson Women's Health Organization that the Constitution did not contain a right to abortion triggered public health fears about the consequences for women, especially those facing socioeconomic inequities.

The United States has long been an outlier among high-income democracies on gun rights, ownership, and violence, but this status has been no barrier to U.S. global health engagement. Constitutional jurisprudence on the right to bear arms has remained peculiar to the United States and has not undermined judicial contributions to American soft power.

However, the juxtaposition of mass shootings across the country and the expansion of gun rights could signal that the Supreme Court has chosen a side in the dysfunctional politics of gun violence. The danger that Bruen poses is less about U.S. global health engagement than deteriorating perceptions of the independence of the federal judiciary and the attractiveness of American culture, values, and policies.

Dobbs ended nearly fifty years of American women having a constitutional right to abortion. The right accorded in Roe v. Wade (1973) and affirmed in Casey v. Planned Parenthood (1992) disappeared overnight, with scarcely any preparations by government authorities to address the health consequences for women that the immediate termination of a constitutional right will create. Post-Roe controversies over abortion affected foreign policy, as seen in the different stances by Republican and Democratic administrations on using U.S. global health funding for reproductive health services. Dobbs reinforces this impasse and, as a result, will change little about U.S. foreign policy concerning abortion in other countries.

However, Dobbs has reinforced concerns that the Supreme Court has been sucked into the polarization that defines abortion politics. American democracy has been unable to find common political ground on gun rights and abortion for so long that federal courts have taken on disproportionate importance. Like Bruen, Dobbs could adversely affect perspectives on the federal judiciary's independence and the nature of American culture, values, and policies.

The Supreme Court also decided two cases with public health consequences when it ruled that Congress had not delegated federal agencies the power to impose a COVID-19 vaccinate-or-test mandate on large employers (National Federation of Independent Business v. Occupational Safety and Health Administration) or to broadly regulate greenhouse gas emissions (West Virginia v. Environmental Protection Agency). Both cases heralded heightened judicial scrutiny of agency claims of authority to address policy problems. Of the two, the climate change case has the most significant implications for U.S. foreign policy on global health.

As part of his COVID-19 strategy, President Joe Biden imposed vaccine mandates on health facilities supported by federal spending and on employers with more than one hundred workers. Both mandates were challenged. In Biden v. Missouri, the Supreme Court held that the power Congress had given the Department of Health and Human Services to protect Medicaid and Medicare patients authorized the health facility mandate. However, in National Federation, the court found that Congress had not granted the power to impose a vaccinate-or-test mandate on large employers under the Occupational Safety and Health Administration's delegated authority to set workplace health and safety standards.

During COVID-19, the biggest foreign policy controversy associated with vaccines centered on accusations that the United States was not sharing its vaccine supplies sufficiently with low- and middle-income countries. Whether federal agencies had the authority to impose vaccine mandates on Americans was not a top concern of foreign governments seeking vaccine doses. At most, the Supreme Court's decisions in the vaccine mandate cases proved that the United States was not using its vaccine supplies most effectively—more evidence that the pandemic revealed serious political divisions in the United States over public health.

The climate change case has more direct consequences for U.S. foreign policy on global health. In West Virginia, the Supreme Court ruled that Congress had not granted the Environmental Protection Agency the authority to require fossil fuel-powered electricity generating facilities to shift production to renewable energy sources. The court based its reasoning on the "major questions doctrine," which requires an agency to show it has clear congressional authorization for issuing regulations of such scope. The decision's grounding in this doctrine means that it is a precedent for challenging regulatory actions by any federal agency.

Prior to this case, congressional opposition to the Biden administration's strategies stymied its efforts to demonstrate U.S. global leadership on climate change. As Alice C. Hill and Madeline Babin at the Council on Foreign Relations argued, West Virginia provides "further evidence of the limited ability of the United States, the largest historical emitter and the second-largest current emitter, to meaningfully combat climate change at the federal level."

Exigent issues in domestic or foreign policy do not escape constitutional law, and the National Federation and West Virginia decisions do not prevent congressional action on urgent public health problems. But in the current political context, whether Congress can take effective action on infectious disease threats and climate change, including delegating appropriate authority to federal agencies, is subject to serious doubt.

As with the gun and abortion cases, the controversies surrounding National Federation and West Virginia demonstrate how COVID-19 and climate change are mired in—and have exacerbated—the hyperpolarization of U.S. politics. This phenomenon spills over into fears that toxic partisanship now infects the federal courts, undermining the rule of law within a fragmented United States and American soft power in a more dangerous world. A democracy divided against itself on public health cannot credibly claim global health leadership.