Go to homepage
Opioid Overdose Deaths: What the United States Can Learn From Other Countries
Governance 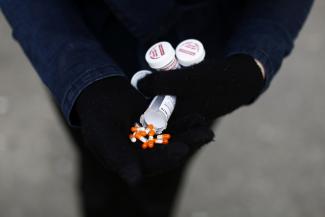 People who use opioids are foremost in our thoughts. The opioid crisis continues to worsen in the United States, signaling a need for strategies—such as expanding the supply of life-saving medication and establishing overdose prevention centers—to stave off needless, tragic deaths. These practices have been embraced by other countries that have not been struck as hard by opioid use as the United States, including Australia, Luxembourg, the Czech Republic, France, Germany, Norway, Italy, and Ireland. Now, the United States is venturing into testing these interventions and it has prompted us to look into how the U.S. opioid crisis ballooned, and what it can take away from other countries’ harm reduction approaches.

The number of people who died from opioid use in the United States in 2021 was nearly 45 percent higher than the number who died in 2020; opioid use deaths in the U.S. were more than three times higher than any of the other eight locations we examined. Although we cannot definitively say if the increasing trajectory of opioid deaths in the time period was accelerated by pandemic-induced lockdowns, it is abundantly clear that the United States’ opioid crisis overshadows that of other countries.

That is not to say that other places we investigated do not also face a troubling upward trend in opioid overdose deaths; based on data from death certificates, deaths are creeping up in the other eight locations studied.

A Look Back at U.S. Opioid Use

What contributed to the opioid epidemic in the United States? In part, the regulations on prescription drugs—guidelines the federal government still wrestles with to this day. Although illicit opioids like fentanyl are now the main drivers of fatalities, improper prescription of legal opioids, prescription abuse, and manufacturers aggressively marketing and misrepresenting the addictiveness of their products to prescribers were closely tied to the onset of the country’s opioid crisis. By contrast, drug companies in parts of Europe faced tighter regulations banning them from supplying gifts to health-care professionals, which may have led to opioid overprescription.

To support people experiencing problems with opioid use, some countries have implemented harm reduction services, such as supplying naloxone and establishing safer places to inject drugs under supervision, that the United States has begun to emulate.

Increasing the availability of naloxone, an emergency life-saving medication that can quickly reverse an opioid overdose, should be prioritized by state lawmakers. One research model estimates that 25 percent of opioid deaths could be prevented by increasing naloxone availability by 30 percent, suggesting policymakers’ endeavors to expand naloxone distribution are worthwhile.

The Australian government is currently funding a take-home naloxone program expected to run through June of this year that makes naloxone free without a prescription in three Australian states. The Czech Republic, Germany, France, Italy, and Norway already have programs in place, and Ireland has been piloting a similar initiative.

On a smaller scale, several public libraries in the United States began supplying naloxone in wall-mounted boxes in January 2022. And Los Angeles County health officials intend to distribute 50,000 boxes of naloxone by this August. As these programs gain footing, the evaluation of their successes and challenges over time will be essential, providing blueprints for future services in other locales.

On the Lookout: Supervised Injection Sites

Supervised drug consumption rooms (DCRs), also known as overdose prevention centers or supervised injection facilities, are another potential, but contentious, option to reduce overdose deaths. These facilities mainly exist in Europe (in Germany, Luxembourg, Norway, and France among the locations we examined), Australia, and Canada, and allow people who use substances to inject pre-obtained drugs in a more sanitary environment with trained staff present. During the COVID-19 pandemic, some sites in Australia remained open, but several DCRs in Europe closed their doors to limit the spread of COVID-19.

The National Institute of Health and Medical Research in France commissioned a study suggesting that the establishment of the country’s two DCRs in 2016 helped reduce overdoses and emergency room visits, echoing prior research conducted with Australian and Canadian facilities. France has extended their DCR initiative for three more years to 2025. However, the European Monitoring Centre for Drugs and Drug Addiction cautions that data on DCRs’ effectiveness still remains limited.

Legal roadblocks have prevented Ireland and the United States from establishing DCRs in the past. And while the U.S. federal government has yet to sanction such sites, two supervised injection facilities opened in November 2021 with approval from the New York City government. Preliminary reports point to optimistic results.

It is crucial for the United States to explore new strategies that other countries have implemented to address its opioid epidemic, and to track its own efforts to reduce opioid deaths. The United States demonstrated its adaptability to changing tactics early in the COVID-19 pandemic when it pivoted to allow patients in opioid substitution treatment programs to take-home doses of methadone, which lessened the burden on patients by reducing daily clinic visits without experiencing negative treatment outcomes. While this unprecedented approach was a response to the pandemic and not a permanent solution at the time, it could turn into a longer term option. The recent U.S. surge in opioid deaths is stark. Innovative options to fight overdose deaths are happening around the globe, some with effective results that the United States can continue learning from.

ACKNOWLEDGEMENTS: The authors would like to thank Theo Vos for providing insights, Katherine Leach-Kemon for providing feedback, and Katia Lucas for fact-checking assistance.

Liane Ong is a lead research scientist at the University of Washington's Institute for Health Metrics and Evaluation (IHME) where she leads the Brain, Back Pain and Other MSKs, Injuries, Renal, Respiratory, Diabetes, Drugs, and Sensory team.


Garland Culbreth is a research scientist at the Institute for Health Metrics and Evaluation.


Annie Chan is a content writer at the Institute for Health Metrics and Evaluation (IHME).

Coronavirus is a Public Health Nightmare—Now Comes One More

by A. Taylor Thomas, Emily Briskin

As the pandemic chokes off opioid supplies from China and unemployment skyrockets, U.S. meth addiction is set to explode