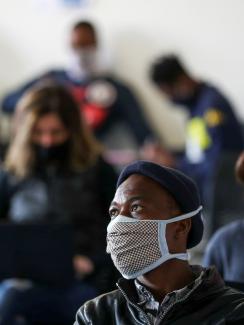 Volunteers wait for their names to be called before testing and taking part in a COVID-19 clinical trial at the Wits RHI Shandukani Research Centre in Johannesburg, South Africa, on August 27, 2020. REUTERS/Siphiwe Sibeko
by Evaborhene Aghogho Nelson  September 17, 2020

Measures taken so far in mitigating SARS-CoV-2, the virus that causes COVID-19, in various countries have been entirely non-pharmacological—social distancing, providing people with clean water, promoting hygiene, sanitation, and hand washing (WASH), and pushing the wearing of face masks—all activities deemed central to controlling the pandemic since we have no effective vaccines at the moment. However, translating these changes into everyday common-sense behavior still poses a challenge from London to Los Angeles and from Lagos to Nairobi.

Complicating any attempt to properly adhere to such strategies, some countries in Africa face critical shortages of personal protective equipment (PPE), overcrowded urban centers, and poor WASH infrastructure to enable hand washing—amid other endemic problems ranging from high burden of HIV/AIDS, malaria, and tuberculosis to maternal and child health issues. Thankfully, for countries staring down the prospects of the COVID-19 pandemic, symptoms have been mild to moderate, and mortality minimal compared to Black communities elsewhere in high-income countries. Nevertheless, to assert the continent is completely out of danger would be severely premature because the effectiveness of control measures is still hard to predict.

As a result, just like other parts of the globe, a hope toward normalcy or ultimate control of the SARS-CoV-2 virus would rely on keeping cases down in the short term while awaiting the availability of a safe, effective, and affordable cure or vaccine. But the larger question remains: how will countries achieve this goal amid increasing nationalism in the claiming of medical commodities by developed nations. Nonetheless, for COVID-19, it’s a race for survival as disruption of global supply chains paralyzes economic activities around the world.

For COVID-19, it’s a race for survival as disruption of global supply chains paralyzes economic activities around the world

Presently, among potential vaccines trials for the SARS-CoV-2 virus globally, the Ox1CoV-19 VIDA-Trial and only recently, the NVX-CoV2373 are the candidates undergoing testing in Africa. The former is a collaboration between Oxford University and University of Witswatersrand while the latter is with Novavax, a U.S. vaccine developer. This is worrisome despite capacities to conduct clinical trials in other countries including Senegal, Egypt, and Algeria. Determined to increase the number of ongoing trials, as part of a joint continental strategy for COVID-19, the African Union Commission launched the Consortium for COVID-19 Vaccine Clinical Trials (CONCVACT). While this partnership hopes to bring global vaccine developers, funders, and other organizations to facilitate more late stage clinical trials within the continent, it is far from achieving its goal. Although the United Nations General Assembly has called for equitable, efficient, and timely access to any successful vaccine, issues ranging from nationalism, monopoly, and patents often persist in countries where they are produced.

Amid the COVID-19 pandemic, the United States’ acquisition of almost all stock of three-months production for remdesivir, an antiviral drug originally developed against Ebola hemorrhagic fever, highlights this phenomenon. Although the United States has a higher number of coronavirus infections and deaths than elsewhere, several nations had also participated in the trials that gave birth to the drug. While production of remdesivir has been licensed outside for developing nations, potential COVID-19 vaccine distribution beyond national borders of countries where they are manufactured, would pose a challenge for those without capacities.

The COVAX initiative aims to achieve global access to vaccines

Prior to emergence of SARS-CoV-2 pandemic, a significant number of countries in Africa relied on the Global Alliance for Vaccine and Immunization (GAVI). To ensure more equitable access, it partnered with the World Health Organization (WHO) and the Coalition for Epidemic Preparedness (CEPI) and launched the COVAX initiative to help countries minimize risk in investment and achieve global access to vaccines. Thankfully, the tripartite partnership secured a 300 million doses deal with AstraZeneca—the leading pharmaceutical company for the Oxford vaccine.

Still, COVAX could face hurdles, as the number of countries participating is unclear and expressions of interest are non-binding. For those who may sign on initially, how long they would remain committed to equitable patience once the scramble begins is also unclear.

On top of that, the growing tensions between the United States and the WHO—especially with the former withdrawing from the WHO—could be seen as a threat to multilateralism. Presently, China displays a positive disposition towards Africa with recent donations of medical supplies and has also pledged supply for potential vaccines. Nevertheless, the fluid political nature of global health generates so many uncertainties because more often than not, global health aid is a tool for international diplomacy as much as for human health. Given China’s population and limitations of industrial capacity elsewhere, a major challenge would be scaling production and timely distribution to all countries upon successful development of a vaccine.

Interestingly, some countries have legislation that prohibits the export of medicals supplies in events of public health emergencies, and we have seen the restriction of export of PPE from Asia, the United States, and Europe—although several African states have demonstrated new innovations to produce PPE and other pandemic essentials by various adaptations at the community and national levels. However, clinical trials for new drugs and vaccines are still relatively few. If the COVID-19 pandemic has revealed anything globally, it is the need to boost production of biotechnology solutions where they are needed domestically.

By removing potential barriers posed by intellectual property rights for new drugs and vaccines, production can scale up

Thus, the ability of African countries to secure potential vaccines or newly discovered cures may rely on individual states pooling resources together while pushing for potential new discoveries in Europe, the United States, and China to be treated as global public goods—meaning that access to those discoveries would be marked by equity, transparency, and fairness. Importantly, any new technologies should be added to WHO's COVID-19 technology access pool and licensed elsewhere to boost supplies. But how this would work without the buy-in of key countries leading the research and development, including the United States, Russia, and India, is questionable. Although as part of a global action for universal access, the European Union Commission has raised almost $16 billion to support low- and middle-income countries. Nonetheless, the African Union had earlier joined other countries calling for a “people’s vaccine,” citing the flexibilities in World Trade Organization (WTO) Doha public health declaration, which grants compulsory licensing during emergencies. By removing potential barriers posed by intellectual property rights for new drugs and vaccines, production can scale up and would go a long way in ensuring timely access to billions of people in vulnerable communities.

But compulsory licenses would be anathema to the pharmaceutical industry, which is a multi-billion-dollar behemoth sector with diverse stakeholders—including, once again, many African states that are dependent on the industry for basic medical supplies. Thus, a much stronger global framework is needed at the highest level to prevent many deaths in the wake of the pandemic.

More than ever, COVID-19 has accentuated the need to boost biotechnology production closer to where it is needed locally—as community health outcomes are increasingly shaped by events happening many miles away, and vice-versa. According to Vera Songwe, Executive Director of United Nation Economic Commission for Africa, Africa consumes about 25 percent of global vaccine production while it contributes 2 percent of clinical trials.

What the pandemic shows is that this unbalanced equation should change. The huge disparities provide an opportunity for private sector engagement in regional research and development in order to strengthen access and supply chains for all types of medicines after the pandemic.

Thankfully, the Africa’s Academy of Sciences has begun mapping clinical trial sites led by African researchers to increase visibility. This would enhance the relationship between trial investors, partners, and regulators. Through building its human capacity and infrastructure, Africans would be protected against some of the ills of modern-day globalization, while countries attempt to build profitable pharmaceutical companies as well. This is important because as the continent becomes more integrated economically through the proposed continental free trade area agreement—prompting increasing connectivity and movement of goods and persons with other parts of the world—potential new outbreaks of relatively unknown diseases may spread wider and faster. That's a threat and a burden the world can ill afford and for which it should not be unprepared.

Remarkably, the global health architecture is only as strong as its weakest link. Given our interconnectedness, ensuring equitable and fair access is not only vital for all people worldwide, but it is also essential in halting further spread.

At the same time, ensuring sustainability would rely on development of regional research institutions or infrastructures as well as production capacities. This is essential for the survival of Africa within the global community.