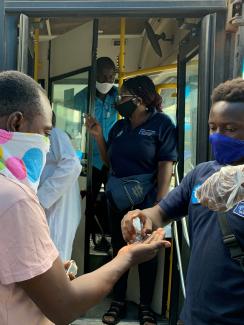 Public transport bus staff offers hand-sanitizer to a passenger who is about to board the bus on the first day of the easing of the lockdown measures during the outbreak of the coronavirus disease (CO REUTERS/Temilade Adelaja
by Evaborhene Aghogho Nelson  June 17, 2020

As African states and their health systems struggle to cope with rising COVID-19 caseloads amidst numerous previously existing endemic health problems such as HIV/AIDS, tuberculosis, malaria, frequent outbreaks of viral infections, maternal and child mortality, and health care delivery inefficiencies, they could increasingly turn to communities in order to meet the social, economic and health needs of vulnerable populations. Public health emergencies or interventions will only be mastered with communities at the centre—a truth African leaders must grapple with as the pandemic evolves on the continent. As the exact course COVID-19 will take next is still unclear, the effectiveness of control measures being adopted by countries is also hard to predict. The World Health Organization (WHO) Regional Office for Africa’s prediction modelling has estimated 83,000 to 190,000 people could die on the continent from COVID-19, and the number of infections could be as high as 44 million if containment fails in the first year and the virus persists longer than expected.

According to the International Monetary Fund (IMF), the impact of disruptions from the pandemic on the global economy may push about 84 to 120 million people into extreme poverty, defined as living on less than $1.90 a day, and about 50 percent of this increase is expected to be in Africa. In Nigeria, more than 87 million people already live below the poverty line with little or no social support from the government. For many in this category the choice between protecting their livelihood or their own health may prove to be a false choice as it would be unfeasible to live with no income. A loss of income often leads to an increase in mortality as a result of deterioration in nutritional status and reduced access to care.

At the same time, for countries like Nigeria whose foreign exchange is heavily reliant on oil revenue, questions and doubts on the sustainability of lockdown strategies persist—especially with dramatic falls in oil prices across the globe. In addition, due to restriction of mobility in key commercial and industrial centres, the Nigerian Federal Capital Territory, Lagos and Kano state, may be forced to severely cut non-oil revenue from taxes as a result of supply chains disruptions, commercial activities suspensions and large-scale job losses. Looking at WHO estimations, the pandemic seems to be at an early trajectory in the continent.

Thus, as Nigeria begins opening its places of worship, public markets, and domestic air travel amid a surge in number of confirmed cases and deaths, it must ensure protection of its vulnerable groups—including women, children, and the elderly. This would require prioritization of continued delivery of primary health care services, early detection, testing and isolation of suspected cases, continued practice of culturally adapted social distancing measures, and maintenance of hand washing and mask wearing within communities—along with dissemination of clear and timely information to individuals and affected communities.

Efforts So Far, And Challenges

So far, the Nigeria Center for Disease Control (CDC) has been at the forefront of outbreak response, supporting and providing technical guidance to affected states. As part of its global health security agenda and its international health regulation core requirements, the Nigeria CDC had began a two-year in-service training in 2008 for medical epidemiologists as well as veterinary and public health laboratory workers.

In Nigeria, more than 87 million people live below the poverty line with little or no social support from the government

Largely modeled after the U.S. Epidemic Intelligence Service, the program offers additional training for frontline health care workers at the local government level to improve surveillance and response to priority disease. As of August 2018, 224 residents had completed the program while 1,000 frontline workers have been trained across 16 states, covering 365 local government areas. But with a total of 36 states, 774 local government, and a rising epidemic curve in Nigeria, the agency is still far from achieving its goal of timely detection and prompt response to disease outbreaks, as well as other public health threats within the nation.

Although its earlier Ebola success was described by the WHO as a “piece of world class epidemiological detective work,” unlike the transmission of Ebola virus, which requires close contact with body fluids from an infected individuals, the SARS-CoV-2 virus, which causes COVID-19, is transmissible via aerosol droplets or contact with surfaces already contaminated. Thankfully, it has a much lower fatality rate compared to Ebola—which is over 50 percent. But for the elderly, people who are immunosuppressed, people who have other underlying health issues, and people who are otherwise vulnerable to worse outcomes, COVID-19 can be fatal. Therefore, preventive safeguards against community transmission are vital in reducing further spread within the nation.

The Community Health Influencers, Promoters and Services Program (CHIPS) launched in Nasarawa state in north–central Nigeria by the National Primary Health Care Development Agency could be a game changer in strengthening existing primary health care systems and complementing the efforts of the Nigeria CDC in sustaining continued disease surveillance and response. By harmonizing the village health worker concept, it aims to train 100,000 agents across the country. Since its launch, this program has been implemented in four additional states, accounting for approximately 4,000 community health agents, and there are plans to roll the same program out in fifteen other states by the end of 2021 according to the agency.

Role of the Program in Community Surveillance

A vital component of these activities is public trust

These same issues were seen in the Accredited Social Health Activist program in Rajasthan and Bihar states in India. ASHA is a community health worker initiative launched by India Ministry of Health and Family Welfare in 2005. By training local women to act as health educators and promoters within communities, it aims to increase the utilization and accountability of existing health services. As of December 2014, it had over 850,000 community health activists across 32 states. With adequate protection, training and financial incentive, the model of using community health workers as instrumental frontline responders has shown great success in both India and Nigeria, and the same approach could be used in other countries. Community health workers could potentially aid in real-time disease surveillance and outbreak management by allowing for early detection, increasing access to remote areas and helping population awareness and containment. A vital component of these activities is public trust.

In the past, community health workers have been effective in bridging the gap between service providers and their immediate communities by creating links within existing local social networks and the health system.

A good demonstration of this was the 2014 West Africa Ebola outbreak in Guinea, Liberia, and Sierra Leone, where community health workers played a huge role in disseminating disease information to their neighbors. Because these health workers are members of their communities, they may be far less likely to receive resistance as they are uniquely positioned and possess in-depth knowledge of the prevailing culture.

Their community closeness can be crucial for countering of widespread misinformation in the form of conspiracy theories, misleading headlines arising from many unverifiable sources—especially in the age of devices, easy internet access, and social media.

At the same time, community health workers may face stigma by virtue of the fact that they are dealing with disease outbreaks. This was part of the experience of community health workers in West Africa with Ebola. Today workers in India are faced with the same sort of stigmatization over COVID-19. They are often seen as carriers of the illness and are consequently being denied home visits. Therefore, having a more harmonized set of village health workers in Nigeria would be vital in dispelling public myths and sustaining long-term risk communication and engagements, which is needed to sustain public trust as appropriate feedback can be channelled and leveraged in re-evaluating strategies. A critical component of this engagement is reliant on providing appropriate, culturally-adapted communication materials distributed across public places, churches, mosques, open markets, and other areas of social congregations, to sustain behavioural changes in the community.

A more impactful but less visible role these influencers would play is the continued delivery of essential primary health care services within communities. Between 2013–2016, use of primary prevention and treatment services decreased by 18 percent, while over 10,000 deaths from HIV/AIDS, tuberculosis and malaria were reported from the near collapse of these essential services during the West African Ebola outbreak in Liberia, Guinea and Sierra Lone. Although the effect of COVID-19 on primary health care services such as maternal and child health is still uncertain, similar disruption could lead to a significant loss of lives. According to John Hopkins researchers, almost 1.2 million children and 57,000 mothers could die worldwide from this disruption of essential primary care services

During the West African Ebola outbreak, use of primary prevention and treatment services decreased by 18 percent

Modeling studies revealed that in Nigeria, India, Indonesia and Pakistan, a relative reduction in family planning use, antenatal clinic visits, and facility-based delivery could lead to as many as 31,980 maternal deaths, 395,440 new-born deaths and 338,760 still births—a 31 percent increase of child and maternal mortality in all four countries. “The COVID-19 pandemic poses a potentially enormous setback for global efforts to end preventable maternal and child deaths and achieve universal health coverage by 2030, and could reverse decades of progress," said Muhammad Ali Pate, Global Director for Health, Nutrition and Population at the World Bank Group, in an April statement.

That's why the Community Health Influencers, Promoters and Services Program is so important—it could achieve a reduction of maternal mortality while simultaneously promoting female empowerment and socioeconomic development and sustaining services in vulnerable communities across Nigeria.

The pandemic has accelerated the need for policy changes in global health such as task shifting, a process of delegation, where appropriate to less specialised health workers, which have been evolving over the years. It offers a critical opening towards achieving greater gender equity within communities. In addition to efficient primary health care infrastructures, national and state governments across Africa should prioritize investment and resource allocation for robust outbreak detection and management via community health workers—because, over 80 percent of threats can be detected or prevented at the community level. Full implementation of the program across states in Nigeria could guarantee some measure of continued protection for vulnerable Nigerians, including women and children—and especially in indigent and marginalized communities across Nigeria.

EDITOR'S NOTE: The author acknowledges Haafizah Kilu, a postgraduate global health and development at University College, London, who made valuable contributions to this article.