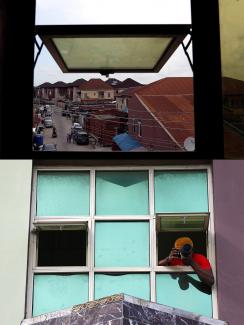 A combination picture shows Adetona Omokanye, a 29 year-old documentary photographer, taking pictures from the window of his home in Lagos, Nigeria, on May 24, 2020—along with a shot from inside. REUTERS/Temilade Adelaja
by Olugbenga Salako August 24, 2020

By 2030, according to United Nations sustainable development agenda, the world is expected to eliminate extreme poverty. Global extreme poverty levels based on the threshold of living on less than $1.90 per day have been declining for decades—from 36 percent of the world's population in 1990 to 8 percent as at 2018. The precipitous drop of global poverty is largely attributable to Southeast Asia, which saw a massive decline in the last three decades. But this is a case where gross numbers hide a subtle trend. Extreme poverty is not declining uniformly but rather concentrating in sub-Saharan Africa. Two countries especially—Democratic Republic of Congo and Nigeria—are projected to have the highest concentration of people living in extreme poverty by 2050.

Sub-Saharan Africa is home to more than one billion people but has an average poverty rate of 41 percent. Rapid economic growth by many countries in the region in the last decade has failed to translate to reducing poverty. With total lockdown measures implemented at the beginning of the COVID-19 pandemic, many families' livelihoods have been threatened, as most people in the region rely on daily income and need to continue working in order to feed their households. Oxfam International has labeled the current COVID-19 pandemic, "the hunger virus," with millions of people around the world on the brink of starvation.

About ninety million Nigerians are currently living in extreme poverty

Between 2000 and 2014, the country experienced rapid economic growth at an average of 7 percent per year—one of the fastest growing economies at the time—a growth rate that has since declined to as low as 2 percent even before coronavirus struck. However, poverty levels are still unacceptably high. About ninety million Nigerians are currently living in extreme poverty, and this is projected to rise to 120 million people by 2030. The absolute poverty headcount stood at 40.1 percent in 2019, implying that four out of ten Nigerians live on less than two dollars a day—with higher incidence in rural areas and among individuals without formal education.

Why Poverty Is Increasing In Nigeria

Some have argued that there is widespread overestimation of poverty levels in many African countries—including Nigeria—because estimates routinely fail to account for earnings in the large informal work sector and underestimate household consumption. A report from a former United Nations special rapporteur on extreme poverty and human rights states that the use of the arbitrary metrics for poverty, like the $1.90-per-day threshold, mask the huge and growing inequality in the world. There are indeed challenges in this regard, and poverty lines do not tell the whole story.

‘The use of the arbitrary metrics for poverty, like the $1.90-per-day threshold, mask the huge and growing inequality in the world’

One explanation for rising poverty in Nigeria is that economic growth has not been consistent, and growth rates are not keeping up with increasing population. It appears, however, that the increasing population is not the real problem. About half the population is made up of young people, but their capital potential is yet to be unlocked because of high levels of youth unemployment. The agricultural sector, although improving, is still weak and has yet to guarantee food security. Indeed, Nigeria still relies heavily on food imports. Nor does farming guarantee financial security for many. In fact, Nigerians who live in rural areas and generate income solely from agricultural activities are at higher risk of being poor. Rising inflation and increasing food prices, poor access to health care and education are major challenges as yet unsolved—and all of which are made worse by the COVID-19 pandemic.

Years of poor governance and economic plan implementation, corruption, political instability and neglect have taken their toll. Boko Haram, a jihadist terrorist organization is responsible for the insurgency, suicide bombings and mass kidnappings in the northeastern part of the country. Although the government reports that the group has been subdued, their activity continues and has caused an increasing number of internally displaced people currently more than 2.7 million. Violent clashes between farmers and herders and widespread banditry are now prominent problems.

Nigeria has thirty-six states and six geopolitical zones. The level of inequality between local government areas and regions in the country is still huge. A World Bank report estimates that up to 87 percent of poor people live in the northern region of the country with the southern region accounting for about 12 percent. Nine states from northern Nigeria ranked among the top ten states with highest incidence of poverty—with rates ranging from 61.5-87.7 percent.

There are also socio-cultural, political and religious issues underpinning the problem of poverty in Nigeria, particularly in the north, suggesting that reducing poverty levels in northern Nigeria will go a long way toward eliminating poverty in the country.

‘A huge influence on the way of life’

Religious and cultural leaders in northern Nigeria have a huge influence on the way of life. They have played an important role as partners in reducing the incidence of vaccine preventable diseases like polio. The recent dethronement of Sanusi Lamido Sanusi, the prominent Emir of Kano—a traditional ruler in Kano State—may constitute a setback to advocacy in the region. He is so much an advocate of the United Nations' Sustainable Development Goals that he has been criticized for expressing his views, including the unacceptable levels of poverty, out of school children and alma jiri system.

Oil prices have fallen in recent years, and since this is the major source of revenue for the government, the economic implications are profound. The worldwide economic recession due to the COVID-19 pandemic and national lockdowns is affecting the gains already made in primary health care, vaccination coverage, control of malaria and access to HIV medication. There is also the risk of reduced donor funding for these global health concerns with possible setbacks that could further worsen health outcomes.

‘A looming crisis with implications for global health’

The problem of poverty is bound with development and health-care indices, which perpetuate a vicious cycle if not addressed hand in hand. Long-term forecasts in global poverty levels are far from perfect but they provide a framework to prevent worse case scenarios. This pandemic may bring the forecasts closer. For countries like Nigeria, one may need to start reviewing projections as early as 2024 or 2025. If more than 120 million Nigerians are in extreme poverty by 2025, one can conclude this is a looming crisis with implications for global health.

Governments worldwide are introducing stimulus packages and grants to save their economies from collapse to the tune of $9 trillion. Countries in the European union will share a package of €750 billion ($826 billion). Of these massive piles of money, an estimated $57 billion has been mobilized to reduce the economic impact in Africa—described as receiving shortest end of the stimulus stick by the Africa Report. Debt repayments have been suspended for eligible countries. Governments in Africa are also mitigating this problem with cash transfer schemes, tax relief and food handouts.

Pulling Nigeria From the Brink—What Else Other Than More Aid Money?

The strategy for reducing the poverty index in Nigeria is complex and there is no silver bullet that will solve the country's problems immediately. There are opinions on whether countries in Africa will benefit from more foreign aid—which has been identified in the past as being responsible for increasing levels of corruption. Whether aid is provided or not, the ultimate destiny of Nigeria lies in its own hands, and it will surely benefit from continued technical support. Donor financial aid and fiscal stimulus packages buy time and can solve acute problems, but they are not enough in themselves on the long run.

Solving the Nigerian problem is a key to reducing poverty in Africa, so it's important to list possible ways to go about it.

‘A key to reducing poverty in Africa’

Advance political will and stability. By far, the biggest factor in lifting millions of Nigerians out of poverty is political will and stability. Nigeria’s relative political stability in the last twenty years puts it in a good position if built upon in the coming decades. The Federal government has recently announced the process of drafting its medium-term plan for 2021-2025 and a long-term national development plan termed “Nigeria Agenda 2050.” Worth noting is that even though the federal government will be the enabler, and this plan is going to be driven by the private sector. Political will is important in building strong institutions, implementing economic policy and addressing corruption in government.

Improve citizen participation. Improving citizen participation in the democratic process will improve government accountability, promote good governance, and reduces government corruption. It will also help turn around public trust, since several years of poor governance and corruption have produced a sense of apathy among Nigerians in recent years. Already many civic organizations and NGOs like BudgIT are on the forefront of advocacy for improved citizen participation in governance and more accountability for how national resources are spent. As such, the activities of citizen advocacy groups need to be encouraged.

Fund priority-based programs. Solving the ongoing humanitarian crisis caused by Boko-Haram in northern Nigeria should be a major priority. Ending a crisis that has displaced more than 2.7 million people will produce better health outcomes and allow a return to stable incomes for many. In addition to that, there should be focus on solving problems based on priority in areas of highest inequality. Investment in human capital, primary health care, and quality education are known key factors in reducing poverty and inequality.

Achieve food security. Development of mechanized farming, agro-processing, and providing access to avenues of better income for rural farmers will improve food security and lift more people out of poverty in the north. Agriculture is the largest labor sector in Nigeria and can serve as a bedrock of the country’s diversification from oil revenue.

Despite the current challenges, Africa is still a land of opportunity. There are huge potentials for positive achievements in combatting poverty and improving human health. So how will Nigeria avoid becoming the poverty albatross of the world in 2050? Its fate will be determined by political stability, good governance, the wise implementation of its solid economic plans, and the participation of its citizens over the next decade.

Olugbenga Salako is a doctor and clinical tutor at the St. George’s University School of Medicine in Grenada.