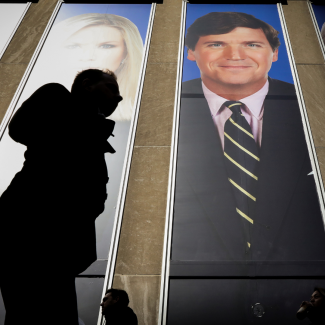 People pass by a promotional image of Fox News' Tucker Carlson on a building in New York, on March 13, 2019. REUTERS/Brendan McDermid
by David P. Fidler May 27, 2022

A colleague sent me Tucker Carlson's segment on the proposal for a pandemic treaty being considered at the World Health Organization (WHO). I was surprised that Mr. Carlson and I agree that a pandemic treaty is not a good idea, although for different reasons. But he invited viewers to "think about that" as he offered his insights. So, in keeping with Carlson's embrace of reasoned discourse, I thought about what he said and offer some reflections here.

In his segment, Carlson argued that President Joe Biden had the United States rejoin the WHO to negotiate a treaty that will empower the WHO to threaten the American way of life permanently. According to Carlson, President Biden is "very close to handing the WHO power over every aspect—the intimate aspects—of your life."

"Imagine," he added, "The civil liberties abuses that you lived through during the COVID lockdown but permanent, and administered from a foreign country." That is indeed something to think about.

I was surprised that Mr. Carlson and I agree that a pandemic treaty is not a good idea, although for different reasons

The United States is the world's most powerful country politically, economically, and militarily. Right now, it is leading an international coalition to repel authoritarian aggression against democratic Ukraine, strengthening U.S. and allied cooperation to counter China in Asia, and providing the most support of any country to the global COVID-19 response. In contrast, the WHO has a budget smaller than what many U.S. hospitals collect and spend annually. For decades, WHO member states—including the United States—have refused to grant the WHO more general authority and resources, even in the wake of COVID-19.

It would need to be one hell of a treaty to transform a small, neglected, and resource-starved international organization into something that could keep life, liberty, and the pursuit of happiness in the United States permanently under its thumb.

Carlson's alarm that the Biden administration plans to use a treaty to bring tyranny to the United States requires thinking about treaties. Any treaty negotiated within the WHO would not apply just to the United States. Treaty provisions empowering the WHO to impose its will inside the United States would mean it could do likewise in every country that accepted the treaty. The likelihood that the United States or any other WHO member state would negotiate, let alone accept, such a treaty is a cartoonish proposition.

In the past, powerful countries have imposed treaties on weaker nations that eviscerated those nations' sovereignty. But this scenario is not in play with the pandemic treaty. Carlson contends that the world's most powerful country could use a treaty to impose tyranny on itself.

We also need to think about the Constitution concerning Carlson's claim. The Senate must approve—by a two-thirds majority—any treaty negotiated by the president before that treaty becomes the law of the land. Treaties that become federal law cannot violate the Constitution, including the Tenth Amendment's allocation of most public health powers to state governments. Finally, the federal judiciary resolves cases and controversies involving ratified treaties, including whether such treaties violate the Constitution.

Carlson's concerns about a pandemic treaty demonstrate an astonishing lack of confidence in the Constitution, Republican legislators, and conservative judges. To take him seriously, the executive, legislative, and judicial branches of the federal government would have to negotiate, approve, and rule in favor of a treaty that is tyrannical and commanded by an organization that, according to Carlson, "every informed person laughs at."

For the foreseeable future, Carlson's scenario only makes sense if Republican senators and an increasingly conservative federal judiciary support such a treaty. Republican senators have opposed President Biden's request for more global COVID-19 aid and his plan to end using public health powers for immigration purposes, so a Biden-negotiated pandemic treaty will not bamboozle them. Conservative judges have scrutinized state and federal public health measures implemented during the pandemic and have struck down several measures for statutory or constitutional reasons. These jurists are unlikely to be the dupes that Carlson posits they could be. Carlson's perspective is less a conspiracy theory than a claim that Republican politicians and conservative judges are capable of monumental political and legal stupidity.

Carlson's concerns about a pandemic treaty show an astonishing lack of confidence in the Constitution, Republican legislators, and conservative judges

Insurrection through the International Health Regulations?

Carlson's condemnation of the pandemic treaty is based on his analysis of the Biden administration's proposed amendments to the International Health Regulations (IHR). The IHR is the main international legal agreement on serious infectious disease outbreaks, and, under Carlson's take, the amended regulations will form the core of the dangerous treaty.

Carlson claimed the administration's proposed amendments will give the WHO and its director-general "total authority over emergency operations in the United States if there is a public health emergency" that "unelected bureaucrats at the WHO" will unilaterally define. It gets worse. Carlson argued that, because every country is "always preparing for a pandemic... there will not be a moment ever when the WHO doesn't have operational control over so-called public health matters in this country," including, remember, the intimate aspects of your life. And, thanks to the Biden administration, "none of this is going to be optional" because WHO member states "must enforce orders from the WHO."

There's a lot to think about here. So, let's start with the IHR. When adopted in 2005, the IHR constituted the most radical international legal agreement on global health ever created. After China's coverup of the outbreak of Severe Acute Respiratory Syndrome (SARS) in 2003, WHO member states gave the WHO the discretionary power to share information about serious outbreaks when countries fail to be transparent and cooperative.

WHO member states defined a "public health emergency of international concern" (PHEIC) in the IHR, and they gave the WHO director-general the authority to declare a PHEIC, even over the objection of the state most directly affected. This is the power in the IHR that most challenges national sovereignty, but Carlson seems unaware of it or unconcerned about it. Under the IHR, the director-general makes recommendations on how member states should respond to a PHEIC, but those recommendations are not binding for member states.

The IHR has found favor with conservatives in the United States. The administration of President George W. Bush supported the transformative changes the IHR made to global health governance. President Donald J. Trump withdrew from the WHO, but not because he rejected the IHR. Indeed, President Trump cited the IHR in explaining why he was freezing funding for WHO in May 2020. He chastised WHO Director-General Tedros Adhanom Ghebreyesus for failing to declare a PHEIC earlier in January 2020.

At no point did these conservative administrations perceive the IHR as a threat to U.S. sovereignty, constitutional government, and civil liberties. In fact, the Bush administration made it clear that the IHR was subordinate to the constitutional allocation of public health powers in the United States.

The Biden administration continued the work that the Trump administration started on revising the IHR. Carlson complained about one Biden-proposed amendment that would require—rather than just permit—the WHO to share outbreak information with other countries without the permission of the country in which the outbreak was occurring. This suggested change connects with President Trump's motivations for IHR reform, namely his accusation that the WHO failed to share information on human-to-human transmission of COVID-19 in China for political reasons, his desire to heighten data transparency and sharing, and his demand for more accountability under the IHR.

But contrary to Carlson's claims, the Biden administration did not propose revisions that would give the WHO total and permanent control over U.S. public health or that would make member states enforce WHO policies. The proposal for an IHR compliance committee that agitated Carlson has no teeth, in keeping with WHO member states' longstanding rejection of dispute settlement mechanisms with enforcement authority. The proposed committee would consider, monitor, promote, and report on IHR compliance, an objective consistent with the Trump administration's desire to hold WHO member states accountable under the IHR.

Whither American Conservatism on Global Health?

I could go on about Carlson's take on the pandemic treaty, the IHR, and other issues his segment covered. But the more I thought about what Carlson said, the more I wondered about how American conservatives think about global health in the wake of the pandemic. During the Bush administration, conservatives played seminal roles in unprecedented efforts to strengthen domestic public health and make the United States a leader in global health.

American conservatism has abandoned this domestic and foreign policy legacy and replaced it with rampant fears that the authority and actions of public health agencies at home and abroad threaten American freedoms. This shift had profound implications in the United States during the pandemic and will remain potent in domestic politics for years.

As Carlson's scorched-earth case against the pandemic treaty suggests, this new conservative perspective on public health is spilling over into the foreign policy arena. What that means for U.S. foreign policy on global health is not clear, especially when the most prominent and well-funded U.S. global health activities do not involve treaties and are not based in the WHO.

What if American conservatives begin probing actual U.S. global health endeavors rather than fulminating about an imaginary treaty that empowers the WHO to mess with Texas? Think about that.