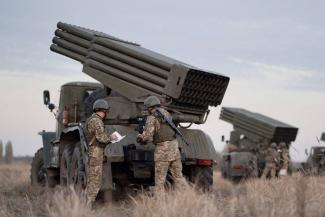 Diplomatic efforts to prevent tensions over Ukraine from turning into war have dominated headlines in recent weeks. Since 2014, an armed conflict in eastern Ukraine has existed between Russian-backed forces and the Ukrainian government. But a buildup of Russian military forces on the Ukrainian border has sparked a bigger crisis, and Russia's issuance of security demands to the United States and the North Atlantic Treaty Organization (NATO) have deepened it. The causes of this crisis are geopolitical. Ukraine is in the crosshairs of Russia's strategic attempt to freeze NATO's eastward expansion and enlarge its sphere of influence westward.

The COVID-19 pandemic has wrought all kinds of havoc, but it has played no role in producing the threat of a Russian invasion of Ukraine that would reset the balance of power in Europe. The pandemic is having an adverse demographic impact in Russia, but the Russian government escalated the crisis during a period when it has suffered an increase in COVID-19 cases and deaths. Russia's build up of forces also does not appear timed to exploit any debilitating change in the pandemic's course in United States or its NATO allies. The unfolding of this crisis during a pandemic does, however, have serious implications for global health concerning geopolitics, the projection of military power, and armed conflict.

The Ukraine crisis is a reminder that balance-of-power politics have returned and that military power—and the willingness to threaten to use and to wield it—are central to maintaining or changing the balance of power. Geopolitical competition has affected responses to COVID-19, but the politics of countering pathogenic threats do not prioritize the possession and exercise of military power. Pandemic geopolitics is epiphenomenal and tactical, while military power and the ability to project it is permanent and strategic in balance-of-power politics.

Arguments that stronger pandemic preparedness and response (PPR) capabilities produce meaningful strategic advantages in a world subject to balance-of-power politics do not hold up. By most accounts, Taiwan has responded well to COVID-19. Yet, in 2021, Taiwanese and American officials grew worried that China was preparing to invade Taiwan—which could only have survived a Chinese attack if the United States used its military power to defend the island. In other words, international cooperation on PPR produces outcomes that are not responsive to the strategic threats that balance-of-power politics create.

From the Halls of Montezuma

Whether serious disease events threaten military readiness is the most important geopolitical question. Since the latter half of the nineteenth century, governments have taken steps to prevent infectious diseases from damaging military capabilities and operations. U.S. mandates that require military personnel to be vaccinated against COVID-19 are justified to ensure the pandemic does not undermine military readiness. Given the economic components of military power, ensuring readiness requires PPR capabilities across military and civilian populations. Military preparedness can support a broader national security interest in pandemic defense. But that security interest remains anchored in narrow balance-of-power considerations and does not reflect a more expansive relationship between national security and health.

In the Ukraine crisis, Russia believes that the United States and its NATO allies will not send their military forces into combat if it invades Ukraine. This belief has nothing to do with how well or poorly the U.S. military has handled the pandemic. In fact, COVID-19 has probably affected U.S. military readiness less than it has Russian military capabilities. But this difference is irrelevant when the United States will not send in the Marines. The readiness advantage the U.S. military could have from better PPR capabilities does not change the strategic calculations about whether the United States or an adversary will use its military forces to maintain or change the balance of power.

War, What is It Good For?

The possibility of armed conflict between Ukrainian and Russian military forces raises concerns about the devastating impact that war can have on human health. As happened during World War I, armed conflicts can facilitate the spread of epidemic and pandemic diseases. A Russian invasion would disrupt Ukraine's efforts against COVID-19, but in a delta- and omicron-saturated world, such a disruption is unlikely to change the course of the pandemic. A war would take an acute and long-term toll on health in Ukraine through military and civilian injuries and death, damage to health facilities and services, interruption of medical care, destruction of government and economic infrastructure important for social determinants of health, and the vulnerability of displaced persons.

International law attempts to prevent these terrible consequences of war by prohibiting the threat or use of force and regulating the conduct of armed conflict. In threatening to invade  Ukraine unless the United States and NATO meet its security demands, Russia has already violated international law and would do so again if it attacks. As the Cold War demonstrated, the prospects for such lawless behavior increase when the balance of power is entrenched in international relations.

The law of armed conflict prohibits, among other things, intentional attacks on civilian populations and targets, including health-care workers and medical facilities. In recent wars from Afghanistan to the Democratic Republic of Congo, combatants have increasingly violated these prohibitions, much to the concern of the global health and humanitarian assistance communities.  Attacks on medical personnel and facilities have particularly been frequent in armed conflicts between government military forces and insurgents, such as in Syria. A Russian invasion of Ukraine could provoke a sustained insurgency that would likely create the conditions in which the health-protective rules in the law of armed conflict would suffer.

In connection with the conventional armed conflict ongoing in eastern Ukraine since 2014, Russia has engaged in hybrid warfare by conducting various cyber operations against Ukrainian government and civilian targets that have stimulated questions under the law of armed conflict. Reports that Russia has prepared the digital battlefield for an invasion by embedding cyber weapons in the Ukraine's cyber-dependent infrastructure raise concerns that cyber attacks might add to the health misery that a war would bring to civilians.

Global Health in a Munich Moment

The diplomatic efforts by the United States and its NATO allies to stave off a Russian invasion of  Ukraine are laden with fears that come with brinkmanship between rival great powers, including the fear of appeasement. In such moments, warnings about the adverse health consequences of armed conflict and pleas for more international cooperation on COVID-19 and future PPR do not address the central balance-of-power issues driving great-power calculations. The Ukraine crisis crystallizes the sobering realities that global health faces in a geopolitical world, even amidst a once-in-a-century pandemic.