President Biden's COVID-19 Summit and the Shift in Pandemic Geopolitics

The pandemic is fading in importance for balance-of-power politics 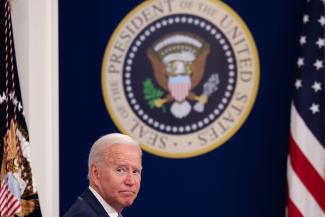 The virtual Global COVID-19 Summit hosted by President Joe Biden on September 22 ended with the Biden administration hailing its unprecedented leadership, and with global health advocates lamenting the inadequate commitments from the United States and other high-income democracies. These dueling positions dominated media coverage of the summit. But this tale-of-two-summits narrative misses something important. The meeting revealed that the pandemic is losing geopolitical significance, which has been one of the outbreak's most prominent characteristics. This development will affect U.S. foreign policy on global health for the remainder of the pandemic and beyond.

The Sound of One Great Power Clapping

From the beginning, China and the United States made the COVID-19 pandemic a battleground in balance-of-power politics. Geopolitical competition appeared in almost every pandemic issue, including the actions of the World Health Organization, compliance with the International Health Regulations, implementation of travel measures, the origins of the coronavirus, the development of vaccines, and vaccine diplomacy. The competition also ventured into the ideological with, for example, China linking the disastrous U.S. pandemic response to the weaknesses of democracy. Although it horrified global health officials, geopolitical competition became an intense, sustained, and defining feature of the pandemic.

Until, it seems, the Global COVID-19 Summit. Chinese president Xi Jinping did not participate, and China's role in the fight against the pandemic and in global health after COVID-19 was invisible at the summit. The Chinese decision to ignore the summit probably has multiple rationales, including not wanting to support a high-profile U.S. diplomatic event. But this decision appears to signal something more strategic—that China no longer believes the pandemic and competing for global health leadership provide geopolitical leverage.

In his prerecorded speech to the UN General Assembly on September 21, President Xi addressed the pandemic and highlighted China's commitments to make two billion vaccine doses available globally by the end of 2021, donate 100 million vaccine doses to low-income countries in 2021, and provide $100 million to COVAX. However, these aspects of President Xi's speech received little, if any, attention amidst the high-level diplomacy in and around the UN on the pandemic crisis. President Xi's remarks on climate change produced far more headlines. Compared to the feeding frenzy around U.S. actions at the Global COVID-19 Summit, China seemed like less than an afterthought.

These different reactions align with what seems to be Beijing's new strategic calculation—that continued competition with the United States over the pandemic and global health is no longer in China's interest. The commitments described in President Xi's speech to the General Assembly were not new. They featured, for example, at an International Forum on COVID-19 Vaccine Cooperation organized by China in early August and at the Brazil, Russia, India, China, and South Africa (BRICS) summit in early September. China appears to be folding its pandemic responses into diplomatic activities and forums that serve a broad range of Chinese geopolitical and foreign policy interests rather than seeking the mantle as the world's leader in global health.

China is perhaps more than willing for President Biden to huzzah that "America is back" as the global health leader among nations and applaud his administration's vaccine commitments and "build back better" promises for global health that the United States will have to fulfill over many years. More importantly, the Chinese might believe that taking on these burdens will not produce balance-of-power dividends for the United States. China will remain involved in global health, but, strategically, it has more important priorities.

"China's decision to ignore the summit probably has multiple rationales, including not wanting to support a high-profile U.S. diplomatic event"

From China, With Love

A few days before the Global COVID-19 Summit, China applied to become a member of the Comprehensive and Progressive Agreement for Trans-Pacific Partnership (CPTPP). The CPTPP emerged in 2018 after President Donald J. Trump pulled the United States out of the Trans-Pacific Partnership (TPP) agreement negotiated by the administration of President Barack Obama. New York Times columnist Thomas L. Friedman noted both the laugh-out-loud audacity of this ploy and how it serves as a painful reminder that the United States abandoned the TPP, one of the few strategic moves the United States planned in Asia that genuinely worried Beijing.

China's application to join the CPTPP followed on the heels of the defense agreement between Australia, the United Kingdom, and the United States (AUKUS), under which Australia will receive, among other things, the technology needed to build nuclear-powered submarines. The AUKUS alliance represents a strategic move by the Biden administration to counter Chinese influence in Asia. The CPTPP and AUKUS developments highlight that military and economic power, not vaccine donations and global health initiatives, will determine how the balance of power between the United States and China evolves over the next decade. Put differently, the geopolitical significance of the pandemic was epiphenomenal and is evaporating.

The fading of the geopolitical relevance of the pandemic and post-pandemic efforts in global health does not mean that U.S. foreign policy should abandon the course charted by the Biden administration at the Global COVID-19 Summit. Not every foreign policy issue requires geopolitical juice to be important. However, if China has decided not to compete with the United States on ending the pandemic and rebuilding global health after COVID-19, the foreign policy benefits for the United States of shouldering these burdens shrink and the risks increase.

Against this backdrop, why the renewal of U.S. global health leadership in the pandemic's wake would produce positive externalities across U.S. foreign policy interests is not clear. In addition, the risks could metastasize if, as critics allege, the United States is promising "too little, too late." And the "too little" might become too much if the U.S. government shuts down or defaults on its debt, American democracy continues in crisis, another dangerous variant emerges, or the Democrats lose control of the House of Representatives or Senate in the 2022 elections. The tolerance in low- and middle-income countries for more unkept promises from high-income democracies is exhausted, which creates the potential for a cascade of negative externalities for U.S. foreign policy well beyond global health.

President Biden urged those attending the Global COVID-19 Summit to "go big" against the pandemic. China appears to have decided that going big on global health is not in its strategic interests. With the pandemic and its aftermath fading from balance-of-power calculations, U.S. success in keeping its promises will not produce foreign policy windfalls, especially where geopolitics remain deadly serious. But U.S. failure to fulfill its promises might create collateral foreign policy damage that China could exploit to harm the United States. Whether the Biden administration went big enough remains hotly debated, but—whatever one's position on that question—the United States must doggedly deliver what it has promised without expecting widespread foreign policy rewards for all the effort.