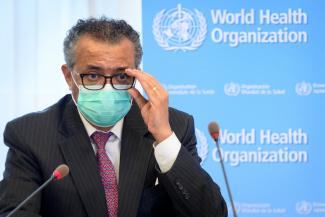 WHO Director General Tedros Adhanom Ghebreyesus speaks during a bilateral meeting on the sidelines of the opening of the 74th World Health Assembly. Laurent Gillieron/Pool via REUTERS
by David P. Fidler May 19, 2022

For the first time since 2019, the World Health Assembly (WHA)—the decision-making body of the World Health Organization (WHO)—will meet in person from May 22-28. The return of delegates to Geneva is another sign that the world is fitfully moving past COVID-19. Instead, the assembly gathers under the shadow of a war that has shaken the international order, diverted attention from COVID-19, and made post-pandemic reforms and other global health challenges more difficult.

In this sobering context, many questions about the WHA meeting arise as WHO member states decide what they want from the organization.

Will the Ukraine War Affect the WHA?

For the past two years, the COVID-19 pandemic dominated the WHA. In 2022, the war between Ukraine and Russia has supplanted the pandemic as the most disruptive and urgent development in international politics. The assembly's theme—"Health for Peace, Peace for Health"—highlights how this armed conflict looms over the global health agenda.

The war has triggered the worst balance-of-power crisis in Europe since World War II and has sent shockwaves around the world. The conflict has deepened, and made more dangerous, the geopolitical transformation of international relations that started before COVID-19 emerged. Geopolitical competition—especially between China and the United States—contributed to multilateralism's failure during the pandemic, created friction at the WHA in 2020 and 2021, and undermined prospects for global health diplomacy. Now, the United States and Russia are engaged in a violent balance-of-power struggle that will determine the fate of Ukraine, European security, and the international order—a grim development for global health.

The war's geopolitics have affected the Group of Seven (G7) and Group of Twenty (G20), which reform proposals have identified as critical global health actors. The invasion of Ukraine has forced the G7 to focus on the Russian threat to European security and democracy, limiting its bandwidth for global health. The U.S. desire to oust Russia from the G20 compromises what the G20 can deliver on global health. Similarly, the WHO regional office for Europe's condemnation of Russia and proposals that the WHA punish Russia raise the specter that geopolitical machinations will infect the assembly's deliberations.

COVID-19 has produced hundreds of proposals to strengthen global health governance against future pandemics. The WHA annual meetings in 2020 and 2021, along with the WHA special session in November 2021, did little to clarify what WHO member states want in terms of such governance reform. Global health experts warned in the lead-up to this year’s assembly meeting that the world is no better prepared for pandemics than it was in 2019. Given this lack of action, the WHA confronts the question of how to change WHO's approach to health emergencies.

Important to the WHA's deliberations on this issue will be the proposals that the WHO Director-General Tedros Adhanom Ghebreyesus will present during the assembly. These proposals emerged from the WHO Secretariat's review of the analyses and recommendations in the many reports issued about the pandemic. The director-general's ideas advance governance, systems, and financing reforms integrated into a new governance architecture for health emergency preparedness, response, and resilience.

Whether WHO member states accept the director-general's blueprint represents one of the most important issues at the WHA. However, a continued lack of progress by WHO member states on answering the governance reform question could damage the COVID-triggered reform enterprise. The window of opportunity for meaningful reform is perilously near closing.

Will Negotiations on a Pandemic Agreement and Revising the IHR Make Progress?

As part of the governance reform effort, WHO member states agreed to negotiate a binding or nonbinding pandemic agreement through an Intergovernmental Negotiating Body (INB) and are also discussing revisions to the International Health Regulations (IHR). The INB began its work earlier this year, but what it has accomplished is not clear. Similarly, the WHA document on amending the IHR contained only one revision proposal that the United States made in January 2022, which raises questions about the extent of member states' interest in amending the IHR.

The WHA meeting is not designed to host negotiations on the pandemic agreement and revising the IHR. Even so, the assembly's deliberations could provide insights about, and guidance on, the crafting of these governance instruments in the months ahead. As with the efforts to reform the governance architecture for health emergencies, the prospects for an effective pandemic agreement and amended IHR are shrinking.

Will Member States Strengthen the WHO?

The pandemic has produced many proposals focused on the need to strengthen the WHO by expanding its authority, improving its capabilities, and increasing the organization's funding. Such proposals appeared in the aftermath of earlier public health emergencies, but, for the most part, member states have not accepted recommendations to strengthen the WHO, especially concerning how they finance the organization. The WHA meetings in 2020 and 2021 followed this pattern because, for example, member states did not increase their assessed contributions to provide the WHO with more resources.

Pleas for strengthening the WHO have remained prominent in the run up to this year's WHA, and advocates for an empowered and sustainably financed WHO will assess the assembly's deliberations on this issue. However, this goal faces serious obstacles. China's rejection of the WHO director-general's recent comments about the Chinese government's zero-COVID policies suggests that China has no incentive to support a more powerful WHO. Having been condemned by WHO's regional office in Europe, Russia is likewise not keen on giving the WHO more authority or resources—assuming Russia does not withdraw from the WHO. Although the U.S. government often rhetorically supports a stronger WHO, its actions demonstrate that it has no interest in expanding the WHO's authority and increasing assessed contributions to improve the organization's funding.

Will the WHA Confront the Global Health Crisis that Climate Change Has Become?

As in the past, the WHA will address a range of global health problems, including polio, noncommunicable diseases, and international recruitment of health workers. During the pandemic, evidence that climate change constitutes a clear and present danger for health became undeniable. The WHO has long advocated for more effective climate change mitigation and adaptation policies, and it did so again at the Glasgow summit in 2021. However, the decades-long failure to reduce greenhouse gas emissions has produced a climate adaptation crisis that threatens public health globally.

The WHO is not prepared or resourced to address the climate adaptation demands that will increasingly come its way from low- and middle-income countries around the world over the next decade. As of this writing, neither the preliminary schedule nor the documents prepared for the WHA include anything specific to climate change, particularly on the adaptation challenges that health systems will face for the rest of this century. Nevertheless, the assembly's deliberations bear watching on this issue given its growing significance. If not this year, the WHA must, at some point, confront what the climate adaptation crisis portends for global health and the WHO.