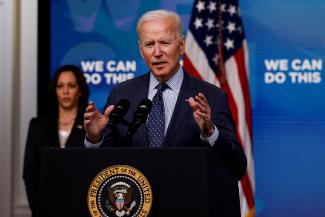 The much-anticipated annual meeting of the World Health Assembly ended on May 31. At the event, member states of the World Health Organization (WHO) did not transform cooperation on the COVID-19 pandemic, agree on reforms for global health governance, or strengthen WHO through increased authority over, or mandatory funding from, member states. These results are disappointing for those who expected the pandemic-ravaged international community to chart bold, new directions for global health at the meeting. However, the outcomes align with the positions the United States took at the assembly, which makes the meeting important for what it reveals about U.S. foreign policy on global health at this point in the pandemic.

The assembly had a packed agenda and adopted over 30 resolutions and decisions on many health challenges. But the COVID-19 disaster elevated certain issues above others, especially the need to reduce inequitable vaccine access, reform global pandemic governance, empower the WHO more to address health emergencies, and mitigate geopolitical frictions in global health. The assembly made little, if any, progress on these priorities.

Before the meeting, the WHO director-general argued that the world was experiencing "vaccine apartheid." During the assembly, countries with large vaccine supplies made no meaningful commitments to share vaccines and commentators observed that other issues dominated the assembly. Hopes for progress on global vaccine equity have turned the forthcoming G7 meeting and an initiative to end the pandemic based on a proposal from the International Monetary Fund.

The leading governance reform idea before the meeting--a pandemic treaty--encountered resistance, and the assembly pushed discussion of "developing a WHO convention, agreement or other international instrument" on pandemics until a special session in November. The assembly established a working group to discuss strengthening WHO's capabilities concerning health emergencies but provided the WHO with no new authority vis-à-vis member states. The assembly approved the WHO program budget for 2022-2023 but did not increase member states' assessed or mandatory contributions. Voluntary contributions will fund the approved budget increases--continuing an approach to WHO financing long considered unsustainable and detrimental to the WHO's ability to act on behalf of all member states.

In addition, geopolitics flared at the meeting over the origins of the pandemic amidst growing scientific and political interest in whether the COVID-19 virus leaked from a laboratory in Wuhan. The Chinese government refused to support additional WHO investigations in China. President Joe Biden then ordered the U.S. intelligence community to undertake another assessment of the pandemic's origins. This U.S.-China clash consumed much political and media attention during the assembly.

President Biden's decision to re-engage with WHO meant U.S. participation in the assembly meeting has heightened significance. But the meeting demonstrated that what the united States considers leadership in global health does not conform with what WHO officials, other influential member states, and health advocates want from the United States concerning this pandemic and beyond. The U.S. government's commitment to vaccine nationalism appears unmoved by rhetoric about vaccine apartheid. The Biden administration rebuffed the call by European allies to have the assembly authorize immediate negotiations on a pandemic treaty. Nor did the United States support making the WHO more independent through expanded powers or increased assessed contributions. The U.S. government confronted China, turning the search for the pandemic's origins into a zero-sum contest between the U.S. intelligence community and the Chinese communist party.

In some respects, the effort to re-establish U.S. leadership in global health echoes features of such leadership before the pandemic

In some respects, the effort to re-establish U.S. leadership in global health echoes features of such leadership before the pandemic. Participation in WHO processes has not been the defining feature of the political and financial commitments that the U.S. government has made in global health. The United States has long prioritized its initiatives (e.g.,the President's Emergency Plan for AIDS Relief), bilateral relationships, and voluntary contributions to WHO over increasing the organization's authority and mandated funding. In global health and other areas, the United States is rarely keen on negotiating treaties, preferring non-binding instruments or arrangements. In past pandemics, the United States secured pharmaceutical interventions for its population before facilitating global access (e.g., vaccines for pandemic influenza H1N1).

In other respects, the assembly meeting reflected how the transformed contexts of domestic and international politics are shaping U.S. policies. Political calculations made in navigating a deeply divided American body politic clearly inform the sustained strength of U.S. vaccine nationalism and the decision to use the pandemic to get tough with China. The pandemic's agitation of the U.S.-China rivalry also demonstrates how much the shift in the international balance of power affects U.S. engagement in global health. Geopolitics provide incentives for the United States to protect and leverage its power, maximize its influence across diplomatic endeavors, and contain and roll back China's ambitions. None of these incentives point to the WHO being a strategic fulcrum for the United States in global health politics.

The pandemic is not over, and the Biden administration's foreign policy on global health remains a work in progress. Even so, the assembly meeting revealed traditional patterns of U.S. foreign policy on global health converging with strong geopolitical incentives in ways that promise to make future U.S. interactions with WHO complicated, contested, and controversial. America is back at WHO, but that does not mean that WHO is, or will be, the epicenter of renewed U.S. engagement with global health.