The Domestic Sources of U.S. Foreign Policy on Global Health 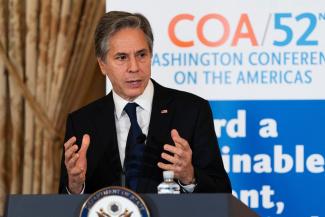 U.S. Secretary of State Antony Blinken speaks at the 52nd annual Conference on the Americas luncheon at the State Department in Washington, DC, on May 3, 2022. Manuel Balce Ceneta/Pool via REUTERS
by David P. Fidler May 9, 2022

In his contribution to this series, James G. Hodge Jr. captures the difference between U.S. responses concerning public health after the 9/11 and anthrax attacks in 2001 and during COVID-19. The kinetic and biological violence in 2001 aligned U.S. politics on the importance of public health at the state, federal, and foreign policy levels. The pandemic has not reflected or produced such an alignment. Hodge argues that COVID-19 responses in the United States "were politicized as threats to the American way of life, liberty, and the pursuit of happiness rather than treated as measures to protect national security, the economy, and individual and community health."

Domestic sources of U.S. foreign policy on global health before the pandemic were more superficial than substantive

The implications of transformed domestic politics on U.S. foreign policy for the remainder of the pandemic and beyond are important. The turmoil in the United States during COVID-19 potentially signals a deterioration in domestic support for U.S. engagement with global health. It also suggests that the domestic sources of U.S. foreign policy on global health before the pandemic were more superficial than substantive.

Analysts of U.S. foreign policy attempt to understand how international factors—such as the distribution of power in the international system—and domestic politics inform what the U.S. government does beyond the water's edge. The Domestic Sources of American Foreign Policy notes that U.S. history is "rife with examples of how domestic politics shape[ ] its actions abroad," an unsurprising phenomenon for a nation that "has perceived itself as a different—indeed, as an exceptional—nation, one with a foreign policy driven more by domestic values than... international politics."

Health issues gained more prominence in U.S. foreign policy during the post-Cold War period—particularly in this century's first decade—than at any time in the nation's history. This change reflected political consensus that the intentional use and naturally occurring spread of pathogens posed threats to homeland security, national security, and foreign policy interests in economic interdependence, development, and humanitarian assistance. Federal-level executive and legislative branches strengthened domestic biosecurity—including programs and funding to improve public health capabilities at state and local levels—and made the United States a leader in global health.

In taking these actions, the U.S. government was not responding to balance-of-power or ideological challenges. At that time, the United States faced no geopolitical rivals and democracy was advancing globally. The domestic support for health actions at home and abroad accepted the need to mesh policies protecting the homeland with global leadership on infectious disease threats. This synergy between domestic and foreign policies flowed from political perspectives that were internationalist, consistent with U.S. world primacy in an era of globalization. The synergy also reflected convergence of conservative and liberal values on public and global health, expressed most powerfully in the President's Emergency Plan for AIDS Relief (PEPFAR), established in 2003.

And Now for Something Completely Different

The domestic sources of U.S. foreign policy changed in the 2010s, culminating with the election of Donald J. Trump as president in 2016. President Trump's "America First" foreign policy tapped into nationalist and populist anger across the U.S. political spectrum concerning the perceived failures of globalist thinking. These failures included the human and economic carnage associated with overseas military operations, burdensome alliances, and unfair trade agreements. Liberal politicians and thinkers grappled with this transformation in work that informed President Joe Biden's promise in 2021 of a "foreign policy for the middle class," in which every foreign policy action would be taken "with American working families in mind."

What benefits did global health leadership create for U.S. power and values as China and Russia challenge the United States geopolitically?

U.S. global health activities played no discernable role in this shift in the domestic sources of American foreign policy. However, the shift altered the domestic politics of U.S. engagement with global health. Under an America First approach, what domestic benefits does PEPFAR deliver to Americans? President Trump's attempts to slash foreign aid, including for health, provided his answer. But the same question arises under President Biden's commitment to pursue a foreign policy that prioritizes helping American working families.

Further, the domestic and foreign policies focused on health before COVID-19 failed when a dangerous—but often predicted—pandemic appeared. Why did the policies, legislation, and funding meant to protect homeland security, national security, and U.S. foreign policy interests from pathogenic threats fail? How, if at all, did PEPFAR protect Americans from COVID-19? What benefits did global health leadership create for American power and values as China and Russia successfully challenged the United States geopolitically and facilitated authoritarianism's spread and democracy's decline year after year since 2006?

These questions highlight that domestic support for U.S. engagement on global health in the post-Cold War period did not protect Americans against the apex threat—a pandemic. In addition, such engagement failed to produce any geopolitical or ideological benefits for U.S. foreign policy while rival states undermined U.S. power and damaged democracy worldwide. Overall, the alignment of domestic and foreign policy on public health seen in the first decade of this century proved astonishingly ineffective at home and abroad.

The toxic politics of public health suggest that rebuilding domestic sources for U.S. foreign policy on global health will prove difficult. A similar story of divisive U.S. politics appears across other policy areas, including reproductive rights, education, environmental protection, immigration, race relations, and the treatment of LGBTQ+ persons. As with public health, much of the political energy on these issues focuses on the state and local levels, which produces policy fragmentation within the United States.

After COVID-19, Hodge suggests that the federal government will increasingly determine how the nation responds to public health emergencies, mitigating the anti-public health measures enacted at state and local levels during the pandemic. However, the politics of federal action exhibit troubling features. Litigation against federal measures, such as vaccine and mask mandates, has raised concerns that federal courts are limiting how the executive branch can respond to public health emergencies. Global aid was cut from the latest COVID-19 bill, and immigration politics have prevented Congress from approving domestic funding. On global health threats associated with climate change, domestic politics are undercutting U.S. foreign policy commitments on greenhouse gas mitigation and climate adaptation assistance.

Most troubling is the raging battle over the primary font of U.S. power and principles—the very nature of American democracy

Concerning domestic sources of foreign policy, most troubling is the raging battle over the primary font of U.S. power and principles—the very nature of American democracy. The efforts by former President Trump and conservative groups to challenge the 2020 election's legitimacy and elect officials dedicated to undermining the democratic process impair the credibility and effectiveness of U.S. foreign policy on every policy issue.

War, Good for Something?

In this context, a devastating pandemic might not produce the synergy needed between domestic politics and foreign policy that would transform how the United States approaches public and global health in the years to come.