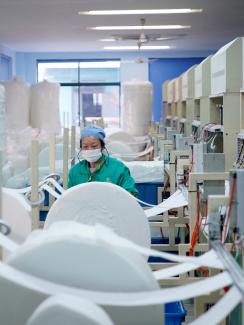 Busy at work making protective masks and other gear—a worker is seen on a production line manufacturing masks at a factory in Shanghai, China on January 31, 2020. REUTERS/Aly Song
by Susan Shirk and Yanzhong Huang March 24, 2020

In early February, as hospitals in Wuhan were completely overwhelmed by the surge of infected COVID-19 cases and funeral homes in the city worked 24/7 to cremate bodies, a friend of one of the authors (Y.H.) who lives in China commented, “this is like living hell.” Few of us would anticipate that what happened in Wuhan could be repeated elsewhere. But now, we might have to face the grim reality that New York City will be America’s Wuhan if we cannot protect our doctors and nurses with the masks, gloves, and gowns they need to keep themselves safe as they treat people with coronavirus.

China currently has 47,000 mask manufacturers with a daily manufacturing capacity of at least 200 million masks per day

Hospitals in New York City already are running out of this essential personal protective equipment and collecting N-95 masks from private citizens who have a few at home. Infection of health care workers has been reported in Mount Sinai hospital system. Last Thursday, New York City Mayor Bill de Blasio indicated that the city would face a shortage of three million N95 masks and fifty million surgical masks by April if the federal government did not help. Many people will die in other cities too as hospitals become overwhelmed by scores of sick people and the shortage of protective equipment becomes even more acute. Indeed, Holy Name Medical Center, the treatment center for New Jersey’s COVID-19 outbreak, ran out of surgical masks on March 21.

China, where the epidemic has already peaked and life is slowly returning to normal, now has a surplus of masks, gloves, and gowns. In a small county in Eastern China, more than 100 factories sprang up over the past two months to make melt-blown fabric, the main material used to make the inner filtration layer of masks. Now the country has 47,000 mask manufacturers, 8,950 of which were set up during the outbreak. These firms have a daily manufacturing capacity of at least 200 million masks per day. On March 9, China announced it would export five million masks to South Korea. By March 20, China has provided testing kits, masks, and protection suits to eighty-two countries, including Italy, France, Pakistan, Japan, and Iran.

Why isn’t America just buying massive amounts of the equipment it needs from China? Because tariffs are standing in the way.

Since 2018, the Donald J. Trump administration has imposed more than $400 billion of tariffs on imports from China. Some $360 billion of those duties remain in place today. Critical medical products, including face masks, gloves, protective goggles, and thermometers have been subject to import tariffs. The tariff rate was initially set at 15 percent, but was lowered to 7.5 percent on February 15 as part of the Phase 1 trade deal.

The administration has said it would reduce some tariffs, yet the list covers only a handful of urgently needed products

Amid growing concerns of a COVID-19 outbreak in the United States, the administration has offered to grant exclusions from import tariffs for certain medical products imported from China. On March 5, the Office of the United States Trade Representative (USTR) approved just 200 specific requests from individual companies to have their purchase of particular items needed to handle the epidemic excluded from the tariff; some of the requests from healthcare companies were denied. On March 10 and 12, the administration said it would temporarily reduce some tariffs imposed on Chinese products to address the pandemic, yet the list covers only a handful of urgently needed products.

When our hospitals, nursing homes, and other health care facilities rush to purchase Chinese protective equipment for their staffs, they still find a tariff added to the price. Last Friday, on March 20, the owner of a nursing home in New Jersey had to pay about $800 in duty for 15,000 facemasks imported from China.

That’s three long months from now, a period during which thousands of doctors, nurses, and patients could die because they lack protective gear

The same day, USTR announced that it was considering “possible further modifications to remove duties from additional medical care products” related to the COVID-19 virus and would collect comments from interested parties until at least June 25, 2020. That’s three long months from now, a period during which thousands of doctors, nurses, and patients could die because they lack protective gear. Thus far, many other countries have adopted a more flexible approach toward importing personal protection equipment. On March 17, South Korea announced it would lower the tariff on medical masks from 10 percent to zero. By contrast, USTR is taking a business-as-usual bureaucratic approach that will take too long. If the masks, gloves, and gowns don’t arrive right away, many doctors and nurses could become infected themselves and lost in the battle against the disease.

President Trump’s response toward suggestions to lift any tariffs at all during this wartime-like emergency was clearly expressed at his March 18, 2020 press conference when he said, “there’s no reason to do that. China is paying us billions and billions of dollars in tariffs.” Still in the transactional mindset of bargaining for a good deal, he implied that he might be more flexible, “if China asks for a suspension or something.”

Public health and safety interests dictate that President Trump immediately lift all tariffs on the medical products the United States needs. It should not depend upon a request from China or a slow and uncertain bureaucratic process here. American lives are at stake.

A broader truce in the trade war that unilaterally lifts all the remaining $360 billion of duties would also help small and medium sized businesses survive the economic losses they are suffering because of the pandemic. It might even give a boost to the stock market.

That’s what a wartime president would do.

EDITOR'S NOTE: This story is a longer companion piece to an op-ed on the same subject by the same authors published in the Washington Post earlier on the same day, March 24, 2020.

Susan Shirk is the Chair of the 21st Century China Center and Research Professor at the School of Global Policy and Strategy at the University of California, San Diego.


Yanzhong Huang is a senior fellow for global health at the Council on Foreign Relations, where he directs the Global Health Governance roundtable series, and a professor at Seton Hall University's School of Diplomacy and International Relations.