Go to homepage
Time for a Health Check: the Reality of Vaccine Rollout in Ecuador
Governance

Time for a Health Check: the Reality of Vaccine Rollout in Ecuador 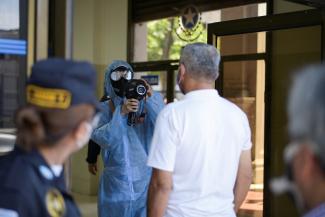 An employee with a thermal scanner checks the temperature of a man before he enters a building in Guayaquil, Ecuador on May 20, 2020 REUTERS/Vicente Gaibor del Pino
by Irene Torres, Daniel Romero-Alvarez, Daniel López Cevallos, Bernardo Cañizares April 29, 2021

The new president of Ecuador, former businessman Guillermo Lasso, who will be inaugurated on May 24, has promised to immunize nine million people in his first 100 days in office. He says he will negotiate the necessary doses directly with pharmaceutical companies, but even if he were able to secure the requisite supply (in a context where vaccines are scarce across Latin America), a closer look at Ecuador's health system suggests his plan is not feasible and would disrupt a primary health-care system that is already buckling under pressure.

Thus far, Ecuador has struggled to expand vaccinations for COVID-19: as of April 23, less than 3 percent of the population had received a dose. Researchers have found that vaccine hesitancy among the population is extremely low, but the country has limited capacity to handle, store, transport and distribute large numbers of vaccines.

The incoming government has decided to rely on staff from the Ministry of Health's 1,939 primary level health centers, which serve uninsured, low-income patients who amount to 60 percent of the population. But barriers to access due to understaffing and distance from facilities are not uncommon in the public network, where there was a 22 percent decline in consultations in 2020. Deferring other health-care services in order to manage and administer shots in Ecuador would seem a mis-utilization of staff.

Because most vaccines require two doses from the same manufacturer, spaced at an interval of less than six weeks, Lasso's promise would entail that 4.5 million people (about 22 percent of the total population) receive two shots.

Even if this vaccination strategy would involve personnel from all 2,972 primary health-care centers (including facilities from the social security system, local governments, prisons, and non-profit organizations in addition to the Ministry of Health), there will still be a deficit in many cities because they are not evenly distributed across the country. Guayaquil and General Villamil, in the coast, have the lowest ratio of health centers to patients. Conversely, municipalities at the eastern part of the country such as Aguarico and Nangaritza, in the rainforest, have the highest ratio — but these areas are sparsely populated and their greatest challenge may be transporting patients or personnel to distant locations.

Municipalities with capacity to vaccinate their population (blue), with a deficit (red)

Countries such as the United States, which has one of the highest COVID-19 vaccination rates in the world, engaged health-care students and professionals from health-related fields to administer shots. A medical doctor at a primary health-care center in Ecuador can hold about 24 daily appointments under typical conditions. If one medical doctor at each facility is dedicated to vaccination instead of their normal duties, over 100 days, five million consultations would likely be impacted.

By these calculations, a deficit of health center personnel will prevent 6 out of 24 provinces from meeting the vaccination goals within the planned period. It may be useful to recruit some of the approximately 100,000 students of veterinary, medical and other health-related sciences available in 18 out of 24 provinces. Significantly, these students are located in provinces with deficit, so they may prove crucial to both vaccinating and preserving health services.

Deficit (<1) per province of Ecuador for the 100-day plan

Whether it is one or nine million shots, in 100 or more days, the incoming Ecuadorian administration should refrain from overburdening the public primary health-care system, and should carefully estimate achievable vaccination rates across the country. In particular, planning must adequately estimate population distribution and distance between place of residence and health facilities. To strike the right balance between vaccinating and sustaining the provision of primary care services to the populations it aims at protecting, the government could have public and private universities rapidly train health professions' students and deploy their personnel to support vaccination efforts.

Irene Torres, PhD, is the technical director for Fundacion Octaedro and fellow of the Health Determinants, Data and Decision-Making, Rockefeller Foundation and Boston University Commission.


Daniel Romero-Alvarez, MD, PhD student at the University of Kansas and works in eco-epidemiological research and mapping with a focus on infectious diseases.


Bernardo Cañizares, MPhil, is president of Fundacion Octaedro and has been participating in local government decision and policy making, and promoting transparency and accountability through civil society and stakeholder participation in Ecuador.