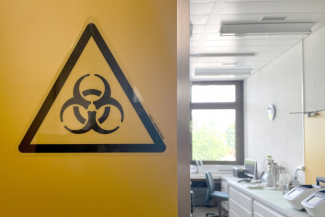 A biohazard sign at the bio-containment facility at Spiez Laboratory, available to WHO as a repository for COVID viruses and other pathogens with pandemic potential, in Spiez, Switzerland, June 2022. REUTERS/Jennifer Rigby
by Aurelia Attal-Juncqua, Matthew Shearer, Gigi Kwik Gronvall September 21, 2022

Since its invasion of Ukraine in February, the Russian Federation has alleged that Ukrainian public health laboratories supported by the United States are conducting offensive biological activities in violation of the Biological and Toxin Weapons Convention (BWC). Entering into force in 1975, the BWC prohibits the development, acquisition, and stockpiling of biological weapons, while promoting the fullest use of biology for peaceful purposes, such as disease surveillance and developing medical countermeasures against pathogenic threats. Russia brought its allegations before the UN Security Council and invoked a formal consultation process under the BWC designed to address treaty implementation concerns.

The Article V consultation was held earlier this month, and BWC parties have published documents and statements from the meeting, which mitigates the risk that Russia or other BWC parties could present a misleading account of the consultation and its outcome. This historic effort at transparency protects the BWC consultation mechanism as a way to address legitimate concerns about biological activities and offers a playbook for how such consultations should be conducted in the future. It also heightens the importance of the upcoming BWC review conference.

From Russia, With Lies

For decades, Russia has perpetuated disinformation campaigns against legitimate biological activities by the United States, other NATO countries, and former Soviet republics. Notable disinformation campaigns include ones launched against the Richard M. Lugar Center for Public Health in Tbilisi, Georgia. Such Russian behavior continued the long-documented history of the former Soviet Union's propaganda efforts during the Cold War.

In keeping with this tradition, and less than a month after invading Ukraine, Russia accused Ukrainian public health laboratories supported by the U.S. government of violating the BWC. In March, Russia called for the Security Council to address the accusations. At that meeting, the U.S. government—including the State Department, Department of Defense, the White House, and UN Ambassador Linda Thomas-Greenfield—and the UN High Representative for Disarmament Affairs unequivocally dismissed the claims. Undeterred, Russia continued to raise unfounded and debunked allegations that U.S.-backed laboratories in Ukraine are developing biological weapons, and Russia invoked the consultation process under the BWC.

Once Upon the Only Other Time

Article V of the BWC obligates states that join it to cooperate in "solving any problems" regarding treaty implementation. Consultations under Article V provide a formal mechanism to increase transparency and mitigate ambiguities regarding biological programs, facilities, capabilities, and activities. Despite this important role, there are limited historical examples of its use.

Russia's resort to Article V represents only the second documented multilateral consultation in the treaty's history. The only previous use was in 1997, when Cuba accused the United States of dispersing agricultural pests over crops. In that instance, BWC parties were unable to agree regarding the nature of the event.

Russia's disinformation regarding Ukrainian biological laboratories is intended to distract and divide global attention concerning its reprehensible actions in Ukraine and to generate post hoc justification for its invasion. Russian invocation of Article V risks tainting the BWC consultation mechanism and abusing it to air political grievances and foment distrust. And, like the 1997 consultations, BWC parties reached no consensus, highlighting major challenges to the mechanism in the face of complex geopolitical tensions.

Despite the absence of a consensus outcome, the Ukraine consultation proved transformative in terms of transparency. It yielded at least 71 publicly available documents, including 36 individual and/or joint statements from BWC parties, a majority of which rejected the Russian accusations as unfounded and politically motivated. The statements generally noted that U.S. and Ukraine "cooperation and assistance has been for legitimate peaceful purpose and in accordance with Article X." They also emphasized that the U.S.-supported laboratories in Ukraine are part of a vital public health and veterinary network that provides the capacity to prevent, detect, and respond to outbreaks, including the COVID-19 pandemic. Only a small number of states—including China, Iran, and a joint statement co-authored by Russia—supported further investigation of the Ukrainian laboratories. These statements illustrate broad denouncement of Russia's disinformation efforts and support for legitimate public health activities in Ukrainian laboratories.

Building on the Ukraine Consultation

The commitment that BWC parties demonstrated concerning transparency in the Ukraine consultation creates an opportunity to set a precedent for future Article V proceedings. An advance copy of the procedural meeting report has been posted, but BWC parties should produce and make publicly available a substantive report, including a detailed account of the debate and a collated list of the evidence submitted during the discussion. A substantive report will limit the ability of governments to distort or misrepresent the consultation, which will preserve the integrity of Article V and reinforce transparency as a guiding principle for future consultative sessions.

The degree of transparency achieved during the Ukraine consultation should serve as the new minimum standard for future Article V proceedings. BWC parties should establish formal guidance and procedures for future consultations and institutionalize lessons from this experience with the principal aim of ensuring the long-term viability of Article V as a tool for mitigating uncertainty and ambiguity regarding biological activities under the BWC.

The Ukraine consultation took place shortly before BWC parties gather in November and December to shape the BWC's future at the treaty's ninth review conference. This meeting provides BWC parties with a major opportunity to institutionalize the lessons from the consultation and set other ambitious goals concerning the complex and evolving biosecurity challenges facing countries for the foreseeable future.

The review conference offers a timely forum for mitigating the risk that Article V could be wielded as a political weapon—leveraged in bad faith to sow distrust in legitimate biological pursuits—by formalizing consultation procedures and increasing transparency—steps that could incentivize more frequent and constructive use of Article V. Transparency builds trust, which is critical for increasing assurance that the biological sciences are being used responsibly and for peaceful purposes.

The geopolitical fault lines exposed by Russian disinformation and the Ukraine consultation risk aggravating diplomatic tensions ahead of the review conference, potentially setting the stage for a contentious gathering. If BWC parties cannot reach consensus on priorities or a plan of action, then action on Article V and on other critical issues will be postponed until the review conference in 2027 or, even worse, progress made in past years might unravel.

The historic and continuing devastation caused by the COVID-19 pandemic should motivate BWC parties to work harder to prevent deliberate biological events and mitigate their potential impact. Many BWC stakeholders believe that a positive and concrete outcome at the Ninth Review Conference is necessary to demonstrate the treaty's ability to adapt to rapidly evolving biological capabilities and threats and to reinforce the global prohibition on biological weapons.