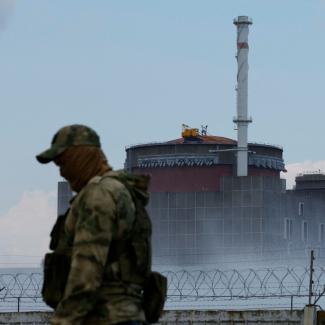 A Russian soldier stands guard near the Zaporizhzhia nuclear power plant outside the Russian-controlled city of Enerhodar on August 4, 2022. REUTERS/Alexander Ermochenko
by Lillian Posner August 29, 2022

Imagine the scenario: You're at Europe's biggest nuclear power plant. Rows of highly radioactive spent nuclear fuel rods lie submerged in the aqua waters of what looks like a swimming pool. They've been stored here to cool but the plant that houses them has been taken over by a foreign military. The power lines that supply the pool are damaged by shelling, causing it to drain, and exposing the incredibly hot fuel rods, which catch fire, sending radioactive smoke up into the air where the wind carries it across Europe.

This is a worst-case scenario, but one that is on the table due to Russia's militarization of the Zaporizhzhia nuclear power plant in southeastern Ukraine. Russian forces captured the plant on March 4, setting part of the facility on fire in the process. Although three of the plant's six reactors have been shut down for safety, the plant continues to operate, staffed by a skeleton crew of Ukrainian technicians, who work under the watchful eye of Russian snipers as soldiers use the plant as a base to launch artillery strikes on the Ukrainian forces across the Dnipro River.

Calls for Russia to demilitarize the plant in accordance with international law have fallen on deaf ears. Three of the four power lines that supply the plant with the electricity it needs to operate safely have been damaged and international watchdogs have been prevented from conducting inspections, although a delegation from the International Atomic Energy Agency is now on its way to inspect the facility. On August 26, the plant's Russian occupiers completely disconnected it from the Ukrainian power grid. While it's since been reconnected, the plant has come precariously close to meltdown.

The Health Consequences of a Nuclear Meltdown at Zaporizhzhia

A meltdown at Zaporizhzhia poses tremendous risks to human and environmental health. The power plant sits alongside the Dnipro River, Europe's fourth largest, which if contaminated, could spread radioactivity all the way to the Black Sea. In the immediate area of the plant, staff and soldiers could become violently ill. Some of them have protective gear, but others are completely exposed, and within half an hour could be overcome with fever, nausea, and vomiting due to the radiation, which in severe cases can be fatal. Outside the plant, those who have inhaled radioactive smoke or were exposed to lower levels of radiation are now at risk of various cancers that could affect them down the line.

Ukraine already has a high cancer burden with more than 160,000 new diagnoses in 2020. The prevalence of cancers, particularly thyroid cancer, is a likely consequence of radiation exposure from the 1986 Chernobyl nuclear power plant disaster, in the northeastern region of the country. Ukraine's oncology and health infrastructure has been badly damaged by the current war. Professor Timothy Mousseau, who studies the biological effects of nuclear disasters at the University of South Carolina, has noted that although biologists are still working to understand the health consequences of the Chernobyl event, in comparison to those with no radiation exposure, Ukrainians and Belarusians who experienced the meltdown have increased rates of congenital defects and miscarriages during pregnancy, cancers, and cardiovascular disease.

Mousseau also pointed out that radioactive particles are most dangerous to animals and people when they are ingested, for example by inhaling them or eating contaminated food. This has particular salience for the hundreds of Russian soldiers who were stationed in the radioactive areas around the Chernobyl nuclear plant, digging trenches, cooking on fires made with radioactive wood, and kicking up radioactive dust before Ukraine regained control of the plant. "It's very likely that many of them will have their lives shortened by one year, 10 years, 50 years, depending upon how big a dose they got, and what disease they come down with," said Mousseau.

Even without a major meltdown, smaller radiation leaks are also possible. Because there are so many variables that determine the severity of the fallout—the strength of the concrete protecting the reactors, the mental state of the technicians, and the direction of the wind that day—the Russian troops who occupy the plant and hope to disconnect it from the grid are playing a dangerous game of nuclear roulette.

The Ukrainian authorities are preparing for a possible incident by evacuating as many civilians as possible. Earlier in the war, Ukraine also distributed potassium iodide pills to people living within 35 miles of the plant, approximately 400,000 people. If taken before and after exposure to radiation, iodine pills can lower the risk of contracting thyroid cancer. Prices for these pills skyrocketed following Russia's invasion of Ukraine as people across Europe scrambled to prepare in case the war triggered a nuclear incident that spread beyond Ukraine's borders. Neighboring countries such as Romania, Moldova, and even Denmark, have also purchased and disseminated iodine pills in case of a nuclear emergency, all while trying to reassure their populations that there's no need for panic. The European Union likewise sent protective gear and decontamination equipment to Ukraine in June as a precautionary measure in case of a biological or nuclear emergency and bolstered its own stockpiles as well.

Amelie Stoetzel, a Ph.D. candidate at the Department of War Studies at King's College London, says that even with an abundance of precautionary and safety measures, the health risks are still high. Ukraine's distribution of iodine pills took place earlier in the war at a time when most of the Zaporizhzhia region was under Ukrainian control. Now, much of the area surrounding the plant is under Russian occupation, which presents additional challenges.

"If there was an accident, even if it involved a tiny release of radiation that wouldn't necessarily do any major harm, that could cause panic amongst civilians, maybe even amongst the military personnel stationed there. It's not clear how the Ukrainian government or the Russian military that occupies the region would react to that and how well they would be able to administer medicine and restore order," Stoetzel said in an interview.

Some reports indicate locals are already experiencing alarm. Residents of the nearby Ukrainian-held town Nikopol described an atmosphere of anxiety as they stood in line for hours to receive their iodine pills, received mysterious Russian flyers warning of a reactor explosion, and live under the constant threat of Russian shelling.

A variety of mental health consequences can affect people who live through a nuclear incident. It's not uncommon for people who believe themselves to have been exposed to radiation to experience psychosomatic symptoms of radiation sickness, even when they haven’t been exposed. The threat to Zaporizhzhia has been especially distressing for Ukrainians who remember the Chernobyl nuclear disaster and the subsequent cover-up by the Soviet authorities.

A repeat of Chernobyl appears unlikely, observed Mousseau, who says that while a missile strike has the potential to release a cloud of radioactive particles, it would not be a sustained nuclear reaction, and there wouldn't be the same kind of meltdown and massive release of fresh particles that result from fission of uranium and plutonium.

"It's unlikely to be a Chernobyl level event, but that doesn't mean it's impossible," he said.