Go to homepage
A Russian Prescription to Reduce Alcohol Use
Food 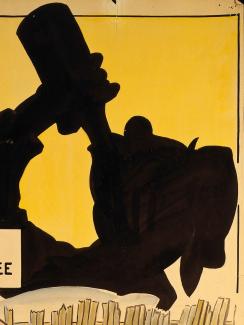 Detail of the shadow cast by a Russian man in a watercolor propaganda painting from the 1950s. After World War II, Russia introduced initiatives to discourage alcohol consumption. CC BY 4.0 from Wellcome Collection
by Emmanuela Gakidou, Katherine Leach-Kemon, Dana Bryazka February 24, 2020

When it comes to fighting drivers of non-communicable diseases, it’s easy to feel powerless. Take rising rates of obesity worldwide, for example. To date, there is a dearth of effective solutions to address the problem. When it comes to alcohol, however—which increases the risk of cardiovascular disease, cirrhosis, injuries, suicide, homicide, alcohol use disorder, and cancer—evidence-based solutions abound. And Russia, one of the heaviest-drinking nations in the world, has successfully used these measures to combat alcohol use.

Russia’s achievements were showcased in a 2019 report [PDF] from the World Health Organization (WHO) Regional Office for Europe titled, Alcohol Policy Impact Case Study: The effects of alcohol control measures on mortality and life expectancy in the Russian Federation. Those policies include measures such as limiting the hours that alcohol can be sold and increasing taxes on alcohol.

Russia, one of the heaviest-drinking nations in the world, has successfully used evidence-based measures to combat alcohol use

According to the Case Study, Russian drinking culture can be traced back to the reign of Ivan the Terrible (1547-1584), who imposed a government monopoly on alcohol, including an early vodka made from grain (“bread wine”), which was sold through state established taverns frequented by the Tsar’s special police forces. In these taverns, patrons drank copious amounts of vodka without food. As time went on, the state started taxing alcohol, which became a lucrative form of revenue to the government towards the end of the 1600s. Peter the Great, who ruled from 1682 to 1725, further influenced Russian drinking culture by requiring the army and navy to drink vodka. More recently, during World War II, history repeated itself when the government gave soldiers daily rations of vodka. This contributed to an increase in alcohol use in Russia after the war.

Following World War II, various initiatives were introduced to discourage alcohol consumption. The third initiative, which began in 1985 and was later endorsed by Mikhail Gorbachev, was particularly effective, if only for a short time. It greatly reduced the supply of alcohol by raising taxes on alcohol; cancelling alcohol imports; destroying, closing, or repurposing distilleries; limiting the amount that each person could purchase; raising the legal drinking age from eighteen to twenty-one; cutting the number of sites where alcohol could be sold; and restricting the hours that it could be sold.

After the dissolution of the Soviet Union in December 1991, a period of economic upheaval ensued. Gross domestic product fell, and regulations on many goods were removed as Russia transitioned toward a market-based economy. During this time, nearly all controls on the production and distribution of alcohol were lifted, according to the WHO case study. Borders were opened, which led to large increases in imports of alcohol. Alcohol use increased dramatically during this period.

The year alcohol use in Russia peaked was 2006, after which it fell as the government tightened alcohol policies

Starting in 2002, the Russian government began to gradually introduce a series of alcohol policy changes. The first policy changes targeted the production of alcohol. For example, the government increased the minimum share capital requirements for being a licensed alcohol producer, which drove many smaller producers out of business. It also introduced an automated tracking system, called the Unified State Automated Information System, to monitor alcohol production and combat the sale of illicit alcohol. Furthermore, the government doubled taxes on ethyl alcohol beginning in 2005.

Even stronger action against alcohol followed in 2010, when alcohol taxes started to increase faster than inflation. In 2010–2011, the minimum unit price of vodka increased, and the government devised a strategy for raising the minimum unit price of spirits and ethanol in beverages. This price increase was followed by a restriction in the hours and places that alcohol could be sold, and stricter regulation of the places where it could be consumed.

As the Russian government tightened alcohol policies over time, alcohol use decreased, and life expectancy increased. Alcohol use in Russia peaked in 2006, falling by an average of 0.4 liters per capita annually until 2017. In parallel, life expectancy for males and females rose by 6.8 years and 4.1 years, respectively, during this time.

Combatting alcohol use requires sustained commitment, but the solutions are within reach for all countries

While the link between declining alcohol use and increasing life expectancy in Russia hasn’t been proven to be causal, the drop in alcohol use appears to have contributed to better health in the country as alcohol-related causes of death have gone down. Other policy changes introduced over this period, such as tobacco control measures and nutrition programs, may have also played a role in health improvements. However, the reductions in alcohol use appear to have stagnated in recent years, which the WHO hypothesizes may be linked to the fact that the increases in taxes on alcohol stopped keeping pace with inflation after 2015, when the government discontinued its policy of steadily increasing these taxes.

Russia’s experience in improving life expectancy through alcohol policy reform can serve as a useful model for other countries to emulate. Russia’s approach could be especially helpful in areas where alcohol use is highest, including parts of Western, Central, and Eastern Europe. In the case study, the WHO points out that Russia’s experience demonstrates how gradual alcohol policy reforms, implemented over long periods of time, can start to change public perception, increasing support for alcohol restrictions.

At the same time, Russia can do more to further decrease alcohol use. The country still ranked 13th worldwide for alcohol use (measured in liters per person) in 2019. And the recent stagnation in Russia’s alcohol use trends underscore the need to constantly adjust taxes to account for inflation, for example, as WHO noted in the case study. Combatting alcohol use requires sustained commitment, but the solutions are within reach for all countries.

EDITOR'S NOTE: The authors are employed by the University of Washington’s Institute for Health Metrics and Evaluation (IHME), which leads the Global Burden of Disease Study. IHME collaborates with the Council on Foreign Relations on Think Global Health. All statements and views expressed in this article are solely those of the individual authors and are not necessarily shared by their institutions.

Emmanuela Gakidou is professor, associate chair for academic programs, and senior director, organizational development & training at the at the University of Washington's Institute for Health Metrics and Evaluation (IHME).


Dana Bryazka is a Post-Bachelor Fellow at the University of Washington's Institute for Health Metrics and Evaluation (IHME).