An Overlooked Need In Global Emergencies

Amplified in crises, period poverty is often overlooked in government and humanitarian responses 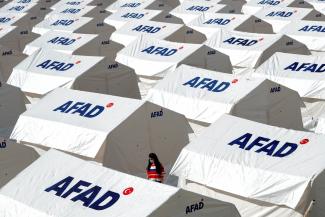 A woman walks amid a tent city set up by Turkey's Disaster and Emergency Management Presidency (AFAD) after an earthquake in the Aegean port city of Izmir, Turkey on November 1, 2020. REUTERS/Murad Sezer
by Bahar Aldanmaz November 20, 2020

On October 30, a magnitude 7.0 earthquake shook the Aegean Sea, devastating Greece and killing more than one hundred people in Izmir, Turkey. As rescue teams started working tirelessly to save people trapped under debris, civil society organizations began requesting and distributing the items most needed by people left homeless by the disaster. But one critical item was missing from their lists.

Survivors of the earthquake were experiencing “period poverty”: a scarcity of sanitary products for menstruators, along with hygiene education, toilets, hand-washing facilities, and waste management to use them. Donors had pitched in thousands of toilet rolls, but very few considered the need for sanitary pads.

This should be of little surprise. Data show period poverty exists in different forms and severities around the globe. At least 500 million women and girls lack a place to change their menstrual products. UNICEF has called for comprehensive menstrual education, with a specific focus on underrepresented groups such as menstruators with disabilities. And period poverty is not confined to developing countries: In the United States, condoms are listed as a medical expense eligible for tax breaks but menstrual products are subject to sales tax in thirty states, creating an undue financial burden, particularly for poorer people. Disasters and conflicts just amplify the severity of period poverty even further

The inadequate consideration of menstrual needs during emergencies is partially due to menstruation stigma, which is so widespread that menstruating people devise secret names to refer to their periods worldwide. The Izmir earthquake is just one of the many examples that show why it’s so important to better meet menstrual needs as a part of every emergency response.

But it is challenging to implement a menstrual health response in emergency settings due to a vicious cycle between providers and the people in need. Because of widespread menstruation stigma, both groups are socialized to abstain from talking about menstruation, and they feel ashamed to ask for products even during an emergency.

Having seen firsthand how the lack of attention to menstruation impacts the well-being of individuals, in 2017 I helped found We Need to Talk (WNTT), an organization dedicated to fighting period poverty and menstruation stigma in Turkey. Knowing the need was even more dire for survivors of the earthquake, who were already under immense stress, WNTT posted a plea on Instagram seeking menstrual supplies for Izmir, and many people reached out to us and donated. When our volunteers delivered the purchased items, aid workers thanked them for bringing soaps and sanitary pads, as they were the items missing and most needed by menstruating people.

Over time, advocating for appropriate menstrual services is getting easier, thanks to the accelerating focus on menstruation studies in public health.  In 2017, Columbia University and the International Rescue Committee published the toolkit for "Integrating Menstrual Hygiene Management (MHM) into Humanitarian Response," which was then pilot-tested in three refugee camps in Northwest Tanzania. MHM focuses on providing easy access to safe, private water and menstrual materials, disposal management, and necessary information about menstruation.

In the wake of the Izmir earthquake, we as a small organization could provide only menstrual products, and were reliant on others to meet bigger needs for water and sanitation infrastructure and public education programs. But we are calling for broader recognition of this issue so that when the next emergency arises, we will be able to partner with other organizations and the government to create a more comprehensive response.

Our call for menstrual supplies on social media prompted some to question the importance of focusing on menstrual materials in the aftermath of a deadly earthquake. People continue menstruating even during emergencies, and it is their right to menstruate with dignity. This horrific disaster is a reminder that menstrual health during emergency settings requires special attention from non-profit and government organizations. There are many tools and resources to initiate menstrual response teams and start integrating an MHM response. This earthquake will not be the last time an emergency humanitarian response is needed. We can act today to prepare better for the next time.

Bahar Aldanmaz is a sociology Ph.D. student at Boston University and a managing partner of the We Need to Talk initiative.