Go to homepage
Mothers, Children, and the Terrible Choice Between COVID-19 and Other Infections
Aging 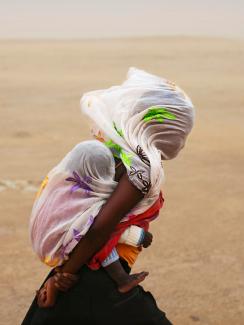 Going out in a storm is a tough choice. Here a woman braves a sandstorm in Timbuktu, Mali, on July 29, 2013. Far worse is the decision many face today whether to brave COVID-19 for other health care. REUTERS/Joe Penney
by Chip Lyons and Chris Collins July 7, 2020

Pregnant women and mothers face an agonizing choice in many parts of the world today: Should they risk exposure to coronavirus in order to access lifesaving HIV medicines, drugs that can cure them of tuberculosis (TB), and malaria preventions and treatments? Or should they forego these critical treatment and prevention measures in order to avoid COVID-19 all together?

Without treatment, 50 percent of children living with HIV will die before their second birthday

No one should have to make this kind of choice. Despite the terrifying speed with which COVID-19 has torn through the world, HIV, TB and malaria are still leading causes of death for children and young people globally. Without treatment, 50 percent of children living with HIV will die before their second birthday, and most will die before they are five years old. Every year, more than 1.1 million children under age fifteen become ill with TB worldwide—half are under the age of five. And in 2018, there were 228 million cases of malaria with over 60 percent of deaths occurring in children under five.

Yet, this is still a vast improvement of where we were just a few decades ago.

With U.S. and international leadership, new HIV infections among children worldwide have decreased by more than half since 2000, mainly thanks to prevention services available to pregnant women living with HIV. At the same time, we’ve seen the numbers of pregnant women and children accessing HIV tests and treatment steadily increase. Use of insecticide-treated bed nets by pregnant women and children to prevent malaria has increased significantly since 2010, and child-friendly tuberculosis treatments have been adopted by over one hundred countries to help save the youngest victims of the highly contagious disease. These are all positive signs that efforts by governments, NGOs and the global health community have made good progress.

Now, suddenly, COVID-19 has put that steady progress in danger. Many pregnant women are isolated at home, apprehensive about clinic exposure or unable to access vital health services because of lockdowns. Many of these hard-fought gains could disappear if we don’t take urgent action.

In countries like Kenya, we are seeing decreasing numbers of women accessing crucial antenatal care. Antenatal care—the single most important service delivery point for HIV services—allows pregnant women and girls newly diagnosed with HIV to rapidly access treatment to support their own health and prevent HIV transmission to their baby. And it works—a simple course of common antiretroviral medications will prevent most pregnant women with HIV from passing the virus to their babies. In the last two decades, millions of lives have been saved through this one type of intervention alone. But if mothers can’t access these critical resources, we could soon see unacceptable increases in new pediatric HIV infections.

HIV—along with TB and malaria—are preventable and treatable, with the right tools and access in the hardest-hit regions. Yet, appropriate interventions are complicated further as we navigate COVID-19 related lockdowns, reduced health site capacity and supply-chain interruptions that are predicted to have an outsized impact on pediatric treatment formulations. Barriers between health-care providers and women and children in critical need are dramatically increasing.

Though it is not yet possible to know how COVID-19 will impact populations affected by HIV and TB, emerging evidence from South Africa shows increases in mortality that should concern us all. Available science indicates the greatest threat of adverse reactions is among those with advanced HIV/AIDS or not on treatment. Children, then, are likely at increased risk, as only half of children living with HIV have access to proper treatment.

After decades of U.S. leadership and tremendous progress against HIV, TB, and malaria, we can’t slide backward now—decisive action is required

High burden countries and age groups that already face the gravest threat from HIV, TB and malaria are exceptionally vulnerable to the lasting impacts of COVID-19.  As we monitor global health programs and strive to mitigate long-term consequences, the data so far shows us bleak possibilities: decades of progress lost and thousands of young lives in jeopardy. This is an unacceptable outcome, but we can still prevent it. In the next COVID-19 supplemental appropriation, Congress must prioritize international aid specifically directed towards battling COVID-19 alongside HIV, TB, and malaria. After decades of U.S. leadership and tremendous progress against HIV, TB, and malaria—through the Global Fund to Fight AIDS, TB and Malaria, the President's Emergency Plan for AIDS Relief (PEPFAR), the President's Malaria Initiative and the USAID TB program—we can’t slide backward now. Decisive action is required to protect the most vulnerable among us: our children.

Chip Lyons is president and CEO of the Elizabeth Glaser Pediatric AIDS Foundation.


Chris Collins is president and CEO of Friends of the Global Fight Against AIDS, Tuberculosis and Malaria

Remembering America’s Global Connections in the Time of Coronavirus