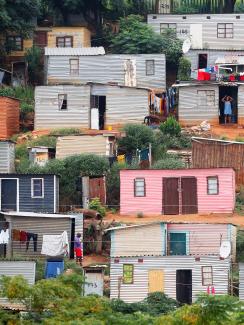 A general view of shacks during a nationwide twenty-one day pandemic lockdown in an attempt to contain coronavirus infections in Umlazi township near Durban, South Africa, on March 31, 2020. REUTERS/Rogan Ward
by Salma Abdalla and Sandro Galea April 15, 2020

Despite early concerns about the potential spread of COVID-19 in Africa, the continent appears to have been spared the initial outbreak seen in other part of the world. This, however, is changing quickly. The number of cases in the region has increased exponentially over the last few weeks, reaching more than 10,000 cases—reported in fifty-two countries—with reports of community transmission in more than sixteen countries as of April 9.

We worry that given the differences in context, even between African countries, lockdown approaches are unlikely to succeed in the region

This increase in the number of cases warrants a quick response. Many countries in Africa are burdened by high rates of malnutrition, different types of pneumonia, widespread malaria, and a large number of people living with HIV/AIDS, tuberculosis, or both. The prior existence of these endemic infectious diseases, coupled with an increasing prevalence of noncommunicable diseases, make for a population in many parts of Africa that is particularly vulnerable to COVID-19. In light of that fact, it is not surprising that several African governments have enacted national responses to the outbreak and responded swiftly to address the spread of the virus. A number of these responses, however, have mimicked lockdown measures currently in place in some European countries and North America. We worry that given the differences in context, even between African countries, lockdown approaches are unlikely to succeed in the region.

There are three main factors that set African apart from other regions. First, the majority of African countries have fragile health-care systems with limited financial resources. For example, Mali has a population of nineteen million people but only fifty-six ventilators, which may be needed by as many as one in six people infected by COVID-19. In addition, many of those health care systems are also overburdened by recent epidemics and existing endemic diseases. Adopting a complete lockdown approach with the goal of flattening the curve may have only marginal success in protecting health-care systems that are already fragile.

Second, African economies and infrastructure may be much less resilient to the consequences of lockdown and curfew measures. A recent report by the World Bank regional economic analysis indicates that the COVID-19 outbreak may lead to the first recession in Africa in twenty-five years. More than half of African urban dwellers live in informal settlements, and about 16.5 million people live in internal displacement camps. About 70 percent of workers on the continent receive low and often volatile earnings and limited access to social protection nets. For these subsets of the population, lockdown and curfew measures are either unenforceable or will lead to a complete halt in sources of economic production that will become quickly untenable.

Third, culture, geography, and the relationship between governments and residents creates a barrier for successful lockdown efforts in many countries in the region. Attempts to ban large social and religious gatherings without successful risk communication may be opposed by influential religious leaders as seen recently in a number of countries. Arbitrarily defined country borders, which were drawn during the colonial rule, also add to the difficulty of implementing lockdown measures. Several African countries are also either experiencing internal conflicts without a clear government structure in place or are ruled by unelected governments that do not have the support of their populations. It is thus not surprising that several lockdowns and curfew measures have been challenged and led to police brutality in efforts to enforce the lockdown.

This strongly suggests that aiming to replicate strategies implemented in Europe and North America is unlikely to succeed in Africa. However, there are other strategies that may work in the African context. We propose two.

First, African governments and donors need to further invest in rapid testing, contact tracing, and isolation. This, building on the successful examples of a number of Asian countries, can isolate those with the disease quickly, limiting its spread. The United States and Europe have failed at implementing testing widely, but time here is on Africa’s side. A concerted effort to put resources into testing and the human capacity to control the disease presents Africa with an opportunity to stem the tide of coronavirus without incurring the costs that are currently threatening to hobble Western countries. Given the growing technology infrastructure in the continent, digital tracing can potentially have a role in implementing this strategy. Second, context-specific guidelines around physical distancing should be based on stratified risk and aim to protect those who are at high risk. Elements of this have been adopted in some European countries, with mixed success, and approaches to physical distancing will work best if coupled with the first strategy. But isolating those at higher risk, principally those over seventy years of age, stands to introduce physical distancing where it matters most without halting already fragile economies.

The success of these strategies will depend on governments acting quickly to ensure testing is available and epidemiologic tracing systems are at the ready. African countries that recently overcame the Ebola epidemic can provide guidance to other countries that have similar contexts. Experience with epidemics over the years have strengthened the region’s scientific capabilities to tackle the COVID-19 threat. Another glimmer of hope is the recent reports of researchers in Senegal working on developing a rapid COVID-19 test. Implementing these strategies is possible. It will require strong leadership, community engagement, and support from the global community. Anything short of that will be letting the continent down.


Sandro Galea is Dean and Robert A. Knox Professor at Boston University School of Public Health.