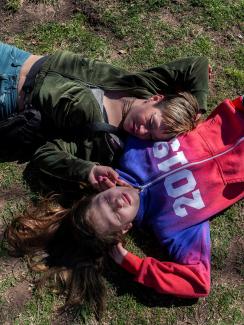 Linked to poverty, malnutrition, and poor housing, TB has risen in Buenos Aires. Johanna, just cured of TB, pictured with her daughter Mora on Sept 9, 2019 while looking for a job and a place to live. REUTERS/Magali Druscovich
by Chris Collins and Mark P. Lagon February 6, 2020

With the world’s attention on the novel coronavirus in Wuhan, it was hardly a surprise to hear President Donald J. Trump mention it in his State of the Union Address on Tuesday, promising to fight at home and abroad not only the newly emerging infection—but also cancer, Alzheimer’s, kidney disease, and the AIDS epidemic. Notwithstanding those callouts, it’s safe to assume the federal budget President Trump presents this coming Monday will once again play to populist themes and skepticism of multilateral action, proposing major cuts to U.S. international assistance. Don’t be too concerned, though. There is every reason to think the U.S. Congress will do as it has done the last three years and reject draconian cuts to the foreign aid budget.

This isn’t just a U.S. phenomenon. Even in an age of growing populism, when political leaders around the world are blaming globalism as the root of domestic ills, there remains deep-seated support for national investment to tackle global challenges with effective tools.

This was never more evident than last October in Lyon, France, where international delegates gathered to pledge future funding to the Global Fund to Fight AIDS, Tuberculosis and Malaria. Representatives of fifty-eight governments, many of them grappling with intense nationalistic sentiments at home, pledged a total of $14 billion, the largest amount ever committed to a multilateral global health institution. Champions of globalism were quick to celebrate what they saw as the larger implications of the pledging session. President Emmanuel Macron of France said it was a “demonstration that, contrary to what many would have us believe, multilateralism is not dead.” This was echoed even more eloquently by famed rock & roll front man and social activist Bono, who described the donations as refutation of the cynics and doubters, saying, “Where you peddle despair, we offer hope / Where you peddle division, we offer unity.”

How did such a strong affirmation of global action happen in a time when many countries are looking inward? The story was unique for each donor nation. Even as it struggled with Brexit, the UK continued to honor its commitment to provide 0.7 percent of its GDP to development assistance, and outgoing Prime Minister Theresa May likely offered her country’s 16 percent increased pledge in part to demonstrate its continued leadership on the global stage.

Committed by U.S. Congress to the Global Fund for FY 2020

Strong support in Italy’s parliament helped support a 15 percent increased pledge even with a populist coalition in charge. In Germany, Chancellor Merkel and others in government remained global health champions even as far right populists gained seats in the election and questioned a helping hand to migrants. In the United States, in the first increase in six years, up by 15.6 percent, Congress appropriated $1.56 billion for Fiscal 2020 for the Global Fund—with legislators of both parties in Lyon indicating it was the first of three installments for Replenishment.

There were common themes behind the pledges. Around the world, advocates mobilized for more than a year in the run up to the replenishment conference, educating and urging on parliamentarians, some of whom knew little about their country’s engagement in global health. In some cases, supporters drew on arguments appealing to more conservative and pragmatist worldviews, such as security, return on investment, and economic benefits at home.

The Global Fund’s various strengths appealed to different eyes. A focus on the three diseases and the measurable results of efforts to fight them were important to securing U.S. and UK support. Investment in stronger health systems to fight those diseases appealed to decision-makers in Europe, Germany, and Japan.

What can we infer from the striking consensus to boost funding against epidemics? In short, there is an appetite to invest in solving global problems when multilateral partnerships offer some key features.

First, keep the focus on concrete problems and outcomes. The Global Fund’s strategy is to drive down incidence and mortality rates for HIV/AIDS, TB and malaria. Measurable results on tangible targets are paramount. This is also true of the Vaccine Alliance, Gavi, for which the UK hosts a donor replenishment conference this summer.

Second, sustainable action needs implementing-country ownership. Local government and civil society—including people affected by the problems—need to shape the response. The Global Fund’s own board and its in-country committees of partners are designed to put governments, civil society, and the private sector voices in the lead. Moreover, country ownership involves local experts and local innovation so crucial to effective and durable impact.

Third, tangibly improving development, economic growth and governance is important. The Global Fund documented [PDF] a $19 return for economic growth and health for every $1 invested. And a Georgetown University study demonstrated that Global Fund investments robustly correlate with improved, open governance in countries. Finally, prioritize the rights and dignity of those most in need. For the Global Fund, both justice and epidemic control require that marginalized and stigmatized people gain equal access to health services. That includes women, girls, and LBGTQ+ individuals threatened by HIV/AIDS; migrants and megacity slum inhabitants exposed to TB; and children vulnerable to malaria.

Despite President Trump walking away from the Paris Agreement on climate change and the Iran nuclear agreement, despite post-Brexit uncertainty in the UK, and despite nationalists in a number of Western countries shunning migrants and displaced people, there’s hope.

Accelerated progress on health is possible, whether by extending child vaccinations through Gavi or by filling an investment gap to reach the achievable goal of ending the HIV, TB and malaria epidemics. That hope for the future also applies to progress on numerous other global priorities like increasing renewable energy use, improving conditions for refugees, and reinforcing the rule of law worldwide. Let’s tap the appetite for action, and not just wait for the world’s populist wave to subside.

Chris Collins is president and CEO of Friends of the Global Fight Against AIDS, Tuberculosis and Malaria


Mark P. Lagon is the chief policy officer at Friends of the Global Fight Against AIDS, Tuberculosis and Malaria, and an adjunct professor for Georgetown University's Master of Science in Foreign Service Program. He served as a U.S. Department of State official for international organizations and for combatting human trafficking.