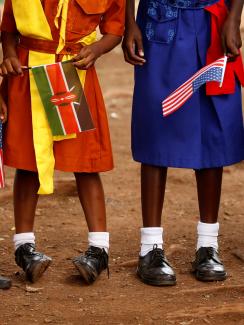 President Donald J. Trump just released his federal budget request for FY 2021, and as expected he is again proposing to make deep cuts to the budgets of key global health programs, including those that serve millions of women and girls. Although Congress will almost certainly reject these cuts (as they have in the past), the stakes are high. While the United States remains the largest donor to women’s health in the world, U.S. funding has been mostly flat in recent years even as the population in need of services has grown. A pull back of any sort would have significant implications for the health of women in low- and middle-income countries. Such issues were discussed at a recent hearing on Capitol Hill, where the House Foreign Affairs Committee examined the U.S. role in addressing global women’s health, the first such hearing focused on these issues in more than a decade.

Improving the health of women has significant spillover effects on the health and economic well-being of their families, communities, and societies

So what role does the U.S. play in advancing the health of women in low- and middle-income countries? For decades, it’s been a substantial one, starting with support for international family planning activities at USAID in 1965 (soon after the agency was created) to the expansion of U.S. efforts to include maternal health in the late 1980s. Today, major efforts include USAID’s maternal and child health, nutrition, and family planning and reproductive health programs, as well as related efforts, particularly PEPFAR (the U.S. federal program responding to global HIV/AIDS) and its adolescent girl-focused DREAMS initiative. The footprint of these U.S. programs is large, spanning more than fifty low- and middle-income countries, mostly in sub-Saharan Africa.

Collectively, these programs support a range of services that address women’s health, including the provision of contraceptives, family planning and counseling, protecting the health of pregnant women during and after childbirth, addressing child marriage and gender-based violence, and increasing access to HIV prevention and treatment. (Note that the United States, by law, prohibits the direct use of U.S. foreign assistance for abortion as a method of family planning.) Studies have shown that improving the health of women has significant spillover effects on the health and economic well-being of their families, communities, and societies.

Indeed, U.S. global health programs reach tens of millions of women, improving their health and the health of their children. USAID reports that its programs helped 81 million women and children access essential health services in 2018, and, since 2012, have supported 12 million women in giving birth in a health facility. USAID’s nutrition program reports that more than 6.9 million pregnant women were reached with nutrition interventions, including breastfeeding education, counseling and support, in FY 2018. In addition, an estimated 24 million women are reached by USAID with voluntary family planning services annually, which help to prevent unintended pregnancy and reduce abortion and maternal mortality. Finally, our analysis of PEPFAR data shows that women represent the majority of those served by PEPFAR. For example, women made up 66 percent, or 9.8 million, of those on PEPFAR-supported antiretroviral therapy in 2019.

That support has contributed to significant impacts. USAID reports that its investments have helped to reduce the chances a woman will die in childbirth by more than half in USAID maternal and child health priority countries. In addition, contraceptive prevalence has increased significantly in countries supported by the USAID family planning and reproductive health program, and new HIV infections have fallen among women in almost all PEPFAR countries.

Despite these successes, global progress has slowed, and significant problems remain. Most countries are not on track to reach global targets, as agreed to under the Sustainable Development Goals (SDGs).

The population of adolescent girls is expected to grow significantly, yet the global community is not prepared to meet their health needs.

Nearly 300,000 women still die during pregnancy and in childbirth, and millions more experience illness and severe adverse consequences each year, largely from preventable or treatable causes. More than 200 million women would prefer to avoid or delay childbearing but are not using a modern method of contraception, and one in five girls face early or forced marriage. Further, women are at disproportionate risk of HIV, the leading cause of death globally for women aged fifteen to forty-nine. Over the next few decades, the population of adolescent girls is expected to grow significantly, yet the global community is not prepared to meet their health needs. Most of these challenges are concentrated in countries reached by the United States, suggesting that adequately-supported U.S. programs are well-positioned for impact.

Funding. First, while the United States is the largest donor to women’s health in the world, mostly flat U.S. global health funding—including for women’s health programs—in recent years has been a constraint on efforts to improve women’s health in low- and middle-income countries.

Even when proposed cuts are ultimately rejected, they create uncertainty in the field each year and around the future of U.S. support

Importantly, however, although cuts have been proposed, they have thus far been rejected. Still, in the FY 2021 budget request to Congress, President Trump proposed cuts once again: a more than $300 million cut to the $608 million family planning program, a more than $250 million cut to $1.4 billion in funding for maternal and child health and nutrition programs, and an almost $1.6 billion reduction in the $5.4 billion bilateral portion of PEPFAR. U.S. funding for other programs that serve women and girls was also cut in the budget request, including for the Global Fund to Fight AIDS, Tuberculosis and Malaria. Even when proposed cuts are ultimately rejected, they create uncertainty in the field each year and around the future of U.S. support more generally, which affects country-level planning and programming. Going forward, more predictability in funding would contribute to program stability and sustainability, and in some cases, additional funding would be needed to achieve further impact.

Domestic Resource Mobilization. Second, although domestic resources for global health have increased in many countries, they have not grown fast enough or with enough magnitude to replace external aid, and many countries with significant need are particularly vulnerable to any reduction in U.S. support. For example, KFF analysis finds that in the twenty-four USAID family planning and reproductive health program priority countries, the United States provided an estimated 70 percent of donor funding, and in five of these countries, the United States provided more than 90 percent, in recent years. Similarly, most PEPFAR countries are vulnerable to even small losses of U.S. support. An option that could be further explored by the U.S. is the use of incentives to stimulate additional investments specific to women’s health by country governments.

Integration and Multisectoral Approaches. Third, while addressing women’s health needs is complex and requires multisectoral and integrated approaches and a range of interventions, U.S. global health programs often remain siloed from one other as well as from non-health actors and sectors (such as education). This is true for funding as well as programming, which can limit the ability of donors, governments, civil society, and others to work closely together in the field and reach women where they are. While U.S. global health programs have worked to become more integrated, challenges still remain in this area, including policy and legal barriers to integration. One model of integration is PEPFAR’s DREAMS program, which is designed to be multisectoral and bridge many of these gaps. Going forward, additional efforts to better align and integrate U.S. efforts internally and with others and pursuing multisectoral approaches could extend the impact of U.S. investments in women’s health.

Adolescent Girls and Young Women. Fourth, most global health programs, including those that specifically seek to reach women, focus on pregnant women or children under five, leaving a gap in available services and programming for adolescent girls and young women. This gap threatens further global health gains, particularly given the projected growth in the youth population in sub-Saharan Africa over the next few decades. The U.S. could work to specifically address and better meet the needs of adolescent girls and young women beyond maternal health, building and/or modeled on PEPFAR’s DREAMS program.

Legal and Policy Requirements. Fifth, legal and policy requirements, including more than twenty specifically related to family planning and reproductive health (more than any other area of global health), can present barriers.

For example, the reinstated and expanded Mexico City policy, now known as “Protecting Life in Global Health Assistance,” for the first time applies to nearly all bilateral U.S. global health assistance (potentially encompassing an estimated $7.3 billion in FY 2020), including PEPFAR, and a much greater number of foreign NGOs (an estimated almost 1,300 foreign NGOs) than ever before. The policy has presented implementation challenges and led to service gaps in some communities. A recent empirical analysis found that when earlier versions of the Mexico City policy were in place in the past, abortion rates and pregnancies rose, and the use of modern contraception fell in countries most exposed to the policy. The United States could examine how reducing implementation and policy barriers might facilitate better implementation of women’s health programs and progress in improving women’s health outcomes.

Data Limitations and Transparency. Finally, despite improvements in data availability and quality (often made with U.S. support), data limitations, particularly at the field/site level, can inhibit assessments of current impact and the ability to course correct in a timely fashion. In addition, where data are available, they are often not provided to policymakers, civil society, and other stakeholders. Without such data, efforts to target investments, coordinate across programs and sectors, and promote transparency are limited. One exception is PEPFAR, for which significant investments in data have been made, allowing for current, site level monitoring and data to be made widely available. Going forward, additional investments in the data efforts of other U.S. global women’s health programs could improve the timeliness and availability of site level data. In addition, programs could make existing data more readily available.

U.S. global health aid has reached tens of millions of women, helping to provide essential health services, reducing maternal mortality and HIV incidence, and improving access to contraception. These gains have not only led to health improvements for women, but also to better economic security for their families and communities. As aid increases have stalled and progress has slowed, the question is what will happen to the health of the next generation of women and girls in low- and middle-income countries.

EDITOR'S NOTE: Adapted from testimony (with full list of sources) given on February 5, 2020, before the U.S. House Foreign Affairs Committee, with additional information on FY 2021 proposed global health funding.


Kellie Moss is the Associate Director of Global Health & HIV Policy at KFF in Washington, D.C.

In Global Health, What’s Past Is Prologue