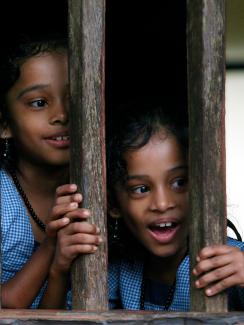 These two nine-year-old sisters are twins: Rafna and Rashna, looking out of a classroom window at their school in Kodinji village in the southern Indian state of Kerala on July 27, 2009. REUTERS/Arko Datta
by Poonam Muttreja February 11, 2020

In recent times, the size of India’s population and related concerns have been a topic of intense political discourse. This includes calls for the introduction of a two-child norm in order to curb the population growth. This is quite unnecessary.

The year India’s population is expected to peak at 1.64 billion people

There are four good reasons why there is no need to worry about India being threatened by a “population explosion.” One, India has done well on the population front and is on course to achieve population stabilization. India was the first developing country with the foresight to formulate its National Family Welfare Programme in 1952. Since then, the nation’s demographic and reproductive health indicators have shown considerable improvement. India’s maternal mortality ratio, which was 570 per 100,000 live births in 1990 fell to 301 by 2001-03 and to 122 in 2015-17, according to official counts [PDF]. The total fertility rate, a measure of the average number of live children a woman would have in her child-bearing years, which was as high as six or more in the 1950s, is down to 2.2—close to the replacement level fertility of 2.1. This remarkable feat has been achieved by the investments made by successive governments—though not sufficiently enough—to education, health, nutrition and empowerment of women.

Two, even if India’s population growth slows down further and the total fertility rates reach replacement rates, there is little one can do to stall the growth of India’s population. Due to the well-known phenomenon of population momentum, the overall size of India’s population will continue to increase for at least four decades as two-thirds of the country’s population is under thirty-five years. Even if this cohort of young population produces only one or two children per couple, this will contribute to a sizeable increase in population, which is projected to peak [PDF] at 1.64 billion in 2050 before declining to 1.5 billion by 2100.

Three, a vast majority of Indian women want to have two or fewer children regardless of in which state they live, whether they are in urban or rural India, or their level of schooling. According to the National Family Health Survey-4, a large survey of households in India, in 2015-16, the total desired fertility rate was 1.8 while the actual total fertility rate was 2.2. The Survey also reveals that the desired fertility rate was 1.5 in urban India, 1.8 in Rajasthan, 1.9 in rural India, and 1.9 among women who have had less than five years of schooling.

The decline has been sharper among Muslims than among Hindus, who form a majority of the population, over the last three decades.

Four, the concern raised by few prominent voices about the growing population of one particular minority religious group, namely Muslims, is simply not backed by evidence. Inter-census decadal growth rates have been declining among all religious groups. The decline has been sharper among Muslims than among Hindus, who form a majority of the population, over the last three decades. For instance, the decline in decadal growth rate during the last two census exercises (2001 and 2011) was 4.7 percentage points for Muslims as opposed to 3.1 percent for Hindus during the same period. There is little basis for attributing differentials in population growth rates to religion. Firstly, according to the NFHS-4, the desired fertility rate among Muslim women is 2, which is marginally higher than the national average (1.8)  and  that  of Hindu women (1.7). Secondly, the total fertility rate among Muslim women in the southern Indian states of Kerala and Tamil Nadu as well at the national level were both lower than the total fertility rate among Hindu women in the northern states of Uttar Pradesh and Bihar.

There is therefore no demographic scare either in terms of overall numbers or in terms of the Muslim population outnumbering the Hindu population. Nevertheless, we need to answer the broader and more important question: Why do Indian women end up having more children than they want to?

Three things seem to explain this. One, levels of women’s education. As the level of the mother’s education goes up, fertility rates decline. The total fertility rate among women with no schooling is 3.1 whereas it is 1.7 among women who have completed more than twelve years of schooling. Analysis of data trends globally and from within India shows that keeping girls in schools and increasing schooling years for girls helps in delaying age at marriage/cohabitation and increasing the interval between marriage and the first pregnancy.

Two, the income and overall wealth of households do matter. As the wealth status of families improves, the total fertility rate decreases. For instance, the fertility rate among households in the lowest and second quintile of the wealth index was 2.4 and above, whereas it was lower than 2.1 in the middle, fourth, and fifth quintile. In other words, education and income matter—but not religion.

A 2015 Lancet report estimated that there are 15.6 million abortions in India annually, a majority of which are a proxy for contraception.

Three, women across the board simply do not have control over fertility decisions starting with when they get married, to whom they get married, how many children they have, and what contraceptive methods to use. According to the NFHS-4 survey, in 2015-16, close to 98 percent of women know about a contraception method, but less than 50 percent of currently married women actually used modern contraceptives—a number that was nearly the same as 2005-06. Regressive social norms often prevent women from exercising their reproductive rights and taking critical decisions like using contraceptives, seeking abortion services, or deciding if, when, and how many children they would want to have. A 2015 Lancet report estimated that there are 15.6 million abortions in India annually, a majority of which are a proxy for contraception.

There is also another phenomenon of son meta-preference which involves parents continuing to have children until the desired number of sons are born. While this has naturally led to the notional category of “unwanted” girls who are estimated to number more than 21 million in country, it may be detrimental to the growth and well-being of female children because it may lead to fewer resources being devoted to them

This preference for sons may also lead to adoption of sex selective practices. In India, illegal sex selective abortions have led to a skewed sex-ratio at birth and beyond.

No country in the world, other than China, has adopted a one or two child policy to slow population growth

There is no evidence to show the effectiveness of a two-child policy. No country in the world, other than China, has adopted a one or two child policy to slow population growth. Even China, which introduced the one-child policy in 1979, had to abort it in 2015 when it found itself in the midst of a population crisis and an abnormally high male-to-female sex ratio. On the other hand, many other countries like Sri Lanka managed to stabilise their fertility rates by simply increasing the legal age of marriage, a move that was made more effective by ensuring girls were educated. There are compelling examples of south-Indian states like Kerala, Tamil Nadu and Andhra Pradesh, which have managed to bring down their fertility rates by investing in female education, creating employment opportunities and enhancing access to a bigger basket of contraceptive choices. In essence, with increased access to education, economic and other development opportunities, fertility decline is the natural demographic phenomenon.

In contrast, a few Indian states which implemented a two child policy, with incentives or disincentives, have failed to bring down the fertility rates to the desired level. A 2005 study looking at the states of Madhya Pradesh, Andhra Pradesh, Haryana, Odisha and Rajasthan by Nirmala Buch found that implementation of such a policy led to a rise in sex-selective and unsafe abortions; men divorced their wives to run for local body elections, and families gave up children for adoption to avoid disqualification in local elections.

India’s first Prime Minister Pandit Jawaharlal Nehru famously stated, “You can tell the condition of a nation by looking at the status of its women.” India has a long way to go in bridging the gender gap. According to the 2019 Human Development Report, India ranked 129 out of 189 countries on the Gender Inequality Index—a composite measure reflecting inequality in achievement between women and men in three dimensions: reproductive health, empowerment, and the labor market.

The limited freedoms that Indian women enjoy has much to do with entrenched social norms that subjugate the position of women. The Population Foundation of India, in 2014, sought to challenge such regressive social norms through its social and behaviour change communication initiative Main Kuch Bhi Kar Sakti Hoon (MKBKSH) or I, A Woman, Can Achieve Anything. The right way forward is to work on changing regressive social norms, ensuring universal access to family planning, ensure social and economic development policies are gender inclusive, and address and change behaviour patterns for population stabilization.

The State should pay much greater attention to quality and for expanding basket of contraceptive choices, especially spacing methods

India does not need a two-child norm. Young women and men need access to quality family planning services and spacing methods of contraception. According to NFHS-4, the unmet need for family planning in India is high given that 30 million currently married women in the age group 15–49 years and 10 million young women in the age group 15–24 years wish to delay or avoid pregnancy but do not have access to contraceptives. The state should pay much greater attention to quality and for expanding basket of contraceptive choices, especially spacing methods. Providing better access and quality of health care for young people will not only lead to improved health but will also visibly improve educational outcomes and increase productivity and workforce participation. These in turn will result in increased household incomes and economic growth for the country. Issues related to population, demographic shift and health and wellbeing of our people warrants highest levels of public discourse and understanding to help India realize its sustainable development targets and economic aspirations.

The key to harnessing the potential of India’s population lies not in a two-child norm but in enhancing the capabilities of young people and expanding the freedoms enjoyed by girls and women. In the ultimate analysis, human development is the best contraceptive.

Poonam Muttreja is the Executive Director of the Population Foundation of India (PFI) in New Delhi.