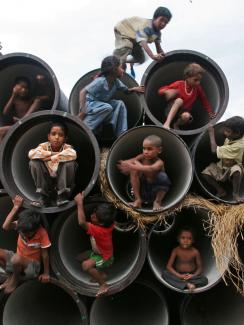 Children play in water pipes at a construction site on the banks of the Yamuna River on July 26, 2010in the northern Indian city of Allahabad. REUTERS/Jitendra Prakash
by Abraham D. Flaxman and Rohina Joshi December 11, 2019

Imagine for a moment the year is 2009 and you are a health care worker in the southeast state of Andhra Pradesh in India, home to some 50 million people. You are sitting across from one of them—a grieving parent whose child died just months before. You are asking the parent about the child’s death. This is hard. You fill in the blanks and bubbles on a standard form as the parent speaks, and then there’s a pause. You have just one more question, you say. “Now would you please tell me in your own words about the events that led to her death?”

The parent thinks and replies, “Our baby girl was born in a hospital. After two months, she started to have coughing problems and a fever. We took her back to the hospital. A doctor tested the baby and said her condition was very serious. We were sent to another hospital, where she was given oxygen and glucose. The doctors later informed us that they could not be certain she would survive. Our baby had fits. She lost consciousness, and she died.”

Now the year is 2017. Child mortality has become a front-burner issue and a public health priority of the United Nations (UN), and the attention is showing. Back in 2009, the child mortality rate in Andhra Pradesh was 58 deaths per 1,000 births. Now, the mortality rate is down to 36 per 1,000, a drop of 38 percent. There is still work to be done in Andhra Pradesh—mortality rates in high-income countries range from 2 per 1,000 in Singapore to 7 per 1,000 in the United States. But an improvement like this is a success worth celebrating and replicating, part of a trend captured in a graph that Bill Gates called in a tweet “the most beautiful chart in the world”.

An ambitious global target, enshrined by the UN as Sustainable Development Goal 3.2, calls for all countries to attempt achieving a child mortality rate of less than 25 deaths per 1,000 births by 2030. While Andhra Pradesh may have made tremendous progress towards this goal, many nations have not. Based on calculations from recent projections produced by the Institute for Health Metrics and Evaluation (IHME), meeting this goal in all countries will require preventing an additional one million deaths per year by 2030. This will not be easy, but it will be possible.

The year is 2019, almost 2020. If the world achieves the ambitious UN goal in the next decade what will be the secrets of that success? There may be no single innovation or improvement by which all countries will meet this goal. It may take many small improvements, all piling up, and the appropriate mix may be different in different places.

So the question becomes, which programs do we prioritize and where? How do we most effectively spend limited resources and save the most children’s lives?

One thing stands out as a major gap in our evidence base today: in the places where there is the most room for improvement, no one even knows what the leading causes of death among the children are. So how do we move forward?

Which programs do we prioritize and where? How do we most effectively spend limited resources and save the most children’s lives?

The de facto standard for identifying the underlying cause of a child death is a death certificate completed by a physician with substantial knowledge of the clinical course of disease prior to death, informed by appropriate diagnostics, including a complete diagnostic autopsy when necessary. However, this is not available in many cases, and the deaths where such information is available likely do not reflect the deaths where it is not. Fewer than half of all deaths are assigned a cause of death, and the poorest nations generally have the least information—yet paradoxically need it the most to prioritize resources.

There are many reasons why accurate clinical assessments of causes of death are often not gathered in poor communities. The majority of deaths in low and middle income countries occur at home and autopsies are not culturally acceptable by the families. In addition, there may be a lack of facilities for doing autopsies and a dearth of trained professionals to performing them.

One possible solution, an alternative approach to capturing this information, is conducting an interview, like the one between you as health care worker and the parent back in 2009. This “verbal autopsy” is a technique to find out what the cause of death is, and following decades of research to identify and improve upon its limitations, it has emerged as a promising and practical approach to addressing the data gap central to the UN’s 2030 Sustainable Development Goal 3.2.

Verbal autopsies are now being integrated into Civil Registration and Vital Statistics systems in several countries across the globe. Programs such as India’s Sample Registration System, China’s National Mortality Surveillance System and the Bloomberg Philanthropies Data for Health Initiative across twelve countries, including the Philippines, are changing the way in which countries collect and analyze mortality data. These programs should have an impact on the quality of cause of death data and help policy makers get a reliable and timely picture about child mortality, including the young girl who died in Andhra Pradesh in 2009. In that case, a clinician reviewing her verbal autopsy would take note of the baby’ age and the fact that the baby had cough with fever and convulsions and conclude pneumonia was the probable cause of death.

The Global Burden of Disease Study uses data on child deaths from verbal autopsy, together with thousands of other source of information, to produce estimates of the leading causes of death location by location. Forecasts that build on this work provide us with our estimate of the number of deaths that must be prevented to meet the global goal. These forecasts can also identify which countries are on track to meet the goal and which are likely to miss the mark if progress stagnates at the pace we have seen in the past.

There is no magic bullet to dramatically turn the dial on child health.

The next step is to move beyond estimating what is happening now and, in a static sense, predict what is likely to happen in the future. A big part of the value of this work is to model alternative futures, to estimate and compare the impact of various “what if” scenarios—what might happen if governments and NGOs pursue one specific strategy versus another. This is something we are just starting to develop the capacity to produce. One approach we are taking is called individual-based simulation modeling, where we create a virtual population calibrated to match the population found in a specific location of interest and then compare the child mortality rates forecast in a business-as-usual scenario with those forecast in an alternative future where one or more health interventions are being implemented at scale to improve child health.

What we have found so far is that there is no magic bullet to dramatically turn the dial on child health. Even focusing on specific locations, there are many small gains to be had but nothing that by itself changes child mortality rates by 10 per 1,000 or even 5 per 1,000. Success in the UN’s 2030 goal will come from dozens of small improvements each shifting the child mortality rate by a small, discrete amount. What these improvements will be, how they will be implemented, and how the global community will rally around them remain to be seen. But what is clear today is that the journey to saving a million children’s lives by 2030 may be taken in baby step rather than leaps and bounds.

EDITOR’S NOTE: Abraham D. Flaxman is employed by the University of Washington’s Institute for Health Metrics and Evaluation (IHME), which leads the Global Burden of Disease Study. IHME collaborates with the Council on Foreign Relations on Think Global Health. Rohina Joshi is a verbal autopsy technical advisor and consultant to the Data for Health Initiative mentioned in the 11th paragraph. She acknowledges support from the Australian National Heart Foundation. All statements and views expressed in this article are solely those of the individual author and are not necessarily shared by their institutions.

Abraham Flaxman is an Associate Professor of Health Metrics Sciences at the Institute for Health Metrics and Evaluation (IHME) at the University of Washington.


Associate Professor Rohina Joshi is a Scientia Fellow at the Faculty of Medicine, University of New South Wales, Sydney Australia and a Senior Research Fellow at The George Institute for Global Health.