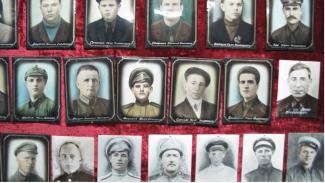 Portraits of Ukrainian men who died during World War II are seen in the front hall of the local government office, in Nychyporivka, around one hundred kilometers Southeast of Kyiv, Ukraine. Photo courtesy of Elena Lesley
by Elena Lesley March 29, 2022

As I watched the recent Russian incursion into Ukraine, complete with aerial bombardments and civilians desperately fleeing to perceived safety, my grandmother's words haunted me, "That is the Slavic way. If we must die, then we might as well all die together. That is how we left without any kind of plan. We had no great hopes. There were no discussions. There was no soul searching. Crawl to your place. We went forward."

My mother's family fled Ukraine—their homeland—amid brutal fighting between the Nazis and Soviets in the context of World War II. Growing up, I heard many times how they escaped Kyiv in a packed horse cart with my four-month-old aunt, grandparents, great-grandparents, great-great grandmother, and even the family dog. On that cart, my great-grandfather carried a fistful of soil from his home village of Nychyporivka, around one-hundred kilometers southeast of Kyiv. The unwieldy caravan made its way to my grandfather's ancestral homeland of Greece, and eventually to the United States as displaced persons.

That is the Slavic way. If we must die, then we might as well all die together

The footage of families fleeing to Western Ukraine and neighboring countries, clutching blankets, children's toys, and family pets, reminded me of stories my family has repeated throughout my life. Now, I cannot divorce Russia's recent invasion from family stories of violence and survival several decades ago. These stories shaped who I am, and how I interact with the world. They led to my professional work as an anthropologist, in which I spend countless hours listening to, engaging with, and elevating the voices of war- and genocide-affected populations in countries such as Cambodia and Rwanda. At the center of my work is the question: how do people heal from such atrocity?

I started my informal "training" as an anthropologist decades ago, in my grandparents' cramped kitchen in Newark, Delaware. After their escape from wartime Europe, my grandparents settled in an old farmhouse near the University of Delaware and planted thick bamboo around the perimeter of the property. They never fully integrated into American society. They created their own world within the shelter of that bushy greenery, a world partly in the suburban United States and partly in their memories of their homeland. At home, they spoke Russian, but according to the proletarian modifications enforced during the Soviet period. Each night, my grandparents read aloud Russian and Ukrainian classics to each other, the works of Nikolai Gogol, Alexander Pushkin, and Mikhail Bulgakov.

The kitchen table was the heart of the home. My grandmother told stories there that detailed life in Eastern Europe during one of the most turbulent and violent periods of the twentieth century. I had never seen the clear waters of the Black Sea myself. I had never slept in a hayloft in the village of Nychyporivka. I had never watched military parades through the center of Kyiv. But these memories became real to me through family stories.

So did the horror of living in constant fear and tumult. During the Great Famine of 1932-33 (known as the Holodomor), my grandparents watched big, covered trucks that collected the bodies of those who had died from starvation from the streets of Kyiv each morning. My grandmother gave birth to my aunt during a bombing raid, the nurses hiding her in a corner and surrounding her with heavy furniture for protection. Last week I read of nurses, yet again, caring for birthing mothers in an underground shelter to protect them from bombing raids.

As the horse cart carrying my family made its way out of Kyiv, my grandparents were forced to lighten the load by opening trunks and throwing many precious items saved from pre-Soviet times on the side of the road. They left linen sheets, monogrammed doilies, tablecloths, and nightgowns. My grandmother's parents turned their backs on the scene in fury. She told me, "after the preparations, the flight, and leaving their homeland behind forever, all their heartbreak had somehow concentrated on these things on the collapsing horse cart." I cannot help but think, what are the families today leaving behind? What will they have to return to?

What are the families today leaving behind? What will they have to return to?

Although my mother's family was always grateful to the United States for serving as their refuge, they also felt disconnected from the people in their new home. The post-war boomtowns of Suburban America felt particularly isolating for war refugees from the Soviet Union. Few people were interested in hearing the stories of Eastern European refugees, or learning of Stalinist violence. They often felt their grief was ignored.

And even as a child, I could tell these storytelling sessions were somehow therapeutic for my displaced family members. Although healing from trauma can take a number of different forms—and looks different in different places—it almost always involves some ability to create a coherent narrative of one’s experiences, and to have that narrative truly heard by others.

According to Robyn Fivush, a psychologist at Emory University, "creating a coherent narrative of challenging experiences can help people heal, but we must be cautious about letting people tell their own story in their own way and in their own time."

This is an important moment for Americans and Europeans to welcome Ukrainian refugees into their countries, and to listen to what they have to say. President Biden recently announced that the United States will accept up to 100,000 Ukrainian refugees. If I've learned anything from decades of listening to family stories, and from years studying the relationship between storytelling and healing as an anthropologist, it's that refuge matters. That welcoming people, and truly listening to what they've experienced, and providing a safe space to heal and reconstruct roots, matters.

Texting from the Potato Cellar

I get updates regularly from a Kyivan friend. First, she fled bombs in Vinnytsa, where news reports showed a missile attack destroying the airport. Next, she sheltered in a potato cellar, singing lullabies to distract her young children and emerging sporadically to look for food. I watched on YouTube how a Ukrainian violinist is playing music in the basement of a building to distract those hiding there.  My friend wants to leave the country with her children. But her mother and mother-in-law won’t leave.

"My life right now can be placed in a little car," she wrote me. "Some clothes, one pair of shoes for everyone, one big blanket, a pack of diapers, and some snacks I am so tired of I will never eat them again when the war finishes. I just want to wake up and my land will not know what war is. Pray for us."

As war once again tears apart Ukraine, people are reaching out to be heard, only now it is happening in real-time, through email, messaging apps, and video chat.

Stories of the unfolding events are still taking shape. Many of these emphasize themes of defiance, resistance, and unity in the face of brutality. They ask us to not believe the version of events emerging from Russian sources. They fear the potential loss of Ukrainian culture and language. And they ask us to support them, in whatever ways we can.

Political considerations, geographical constraints, and personal abilities will shape what those of us can do—whether provide a safe haven for the displaced, as many around the world have done, offer mental health support via videoconferencing, or send desperately needed funds to Ukrainians via AirBnB. But whatever approach we choose, we must first listen carefully to those under attack, and hear what they have to tell us.

Elena Lesley is completing her PhD in Anthropology at Emory University, where she has studied mental health treatment for survivors of the Khmer Rouge regime in Cambodia. She previously worked as a journalist internationally and in the United States, and as a Senior Research Specialist at the Princeton School of Public and International Affairs. She holds an MS in Global Affairs from Rutgers and a BA in Political Science from Brown.