Go to homepage
Leading by Example: COVID-19 Infections at the Highest Levels of Government
Governance

Leading by Example: COVID-19 Infections at the Highest Levels of Government

What can other countries tell us about how U.S. behavior might change following President Donald J. Trump’s infection 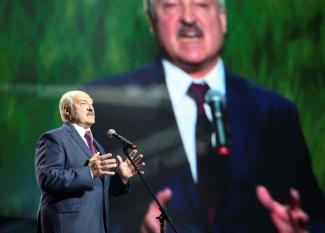 Two weeks ago, U.S. President Donald J. Trump became the latest in a string of world leaders to test positive for COVID-19. In March, when the pandemic was just beginning its spread across the globe, the Prime Minister of the United Kingdom, Boris Johnson, fell ill and was hospitalized for several days. A few months later, President Jair Bolsonaro of Brazil tested positive for the virus, as did leaders in Belarus, Bolivia, Guatemala, Honduras, Armenia, and Russia.

When Leaders' COVID-19 Diagnosis Were Publicized

Many of these leaders oversee especially hard-hit countries and, prior to falling ill, had openly resisted implementing measures to slow the spread of COVID-19, both in national policies and in their personal behavior. President Trump and his staff have defied the Centers for Disease Control and Prevention’s (CDC) guidelines around mask usage, quarantine, and social distancing at least twenty-seven times since September 1, and have offered mixed messages about the need to wear masks. Brazil’s Bolsonaro similarly balked at mask usage, and a judge even had to direct him to keep his mask on while sick. Boris Johnson openly boasted about shaking hands “with everybody” just days before he tested positive, and Belarusian President Alexander Lukashenko referred to the pandemic as a “psychosis” and touted vodka as a cure. Despite their personal experiences with the virus, many of these leaders have not significantly changed their own behavior or messaging around the need for caution after falling ill.

Following the president's COVID-19 diagnosis, early polls indicate about a fifth of Americans report they are now more likely to wear a mask

But has infection at the highest levels of government led to widespread behavioral changes among the public in those nations? Will President Trump’s personal experience with COVID-19 inspire higher rates of mask wearing among Americans and decreases in their gatherings and other nonessential activities?

The good news is that following the president's COVID-19 diagnosis, early polls indicate about a fifth of Americans report they are now more likely to wear a mask when leaving the home. However, the international evidence is less encouraging about the potential for widespread behavioral changes.

Two Weeks Before and After Leader's Infection Was Publicized

The figure above looks at the average daily rate of change in mask wearing—or the percent of people saying that they always wear a mask in public—for six countries over the two weeks before and the two weeks after their leaders’ COVID-19 infections were publicized. In every country except the United Kingdom, trends in rates of mask wearing generally stayed the same following the announcement. Though the United Kingdom saw an upward trend in overall mask usage, this appears to be part of an uptick that began several days before Boris Johnson’s COVID-19 result was announced. Following his infection, the rate of increase in mask wearing actually slowed, and the percentage of individuals who reported always wearing masks remained low two weeks after. Overall, public attitudes towards mask wearing did not change significantly in any of these countries after leaders fell ill with COVID-19.

Two Weeks Before and After Leaders' Infection Was Publicized

The same pattern exists for mobility, a measure of personal movement by a population, as based on anonymized and aggregated cellphone data from several technology companies. This mobility metric is an indicator of the potential for personal contact, with lower mobility potentially meaning fewer opportunities for spread of COVID-19. Again, in every country except the United Kingdom, mobility neither increased nor decreased significantly following a leader’s infection. The United Kingdom did see a large decrease in mobility around when Boris Johnson fell ill. However, the country had also issued strict lockdown orders just four days prior to Boris Johnson’s infection, and most of that decrease in mobility occurred before his illness.

Unfortunately, other countries’ experiences offer a depressing prediction for those hoping that there may be a silver lining in President Trump’s infection of improved public attitudes towards masks and social distancing. Despite the cautionary tale of the president’s illness, the international evidence suggests the public is unlikely to listen.

The Virus Inside the White House

All Bets Are Off for Measuring Pandemic Preparedness

Three standard measures don't predict how countries fare in COVID-19—so how do we better prepare for the next pandemic?