Go to homepage
The Myth of South Asian Exceptionalism
Aging 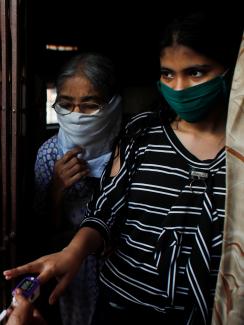 Community health volunteers check the pulse of a resident during a check-up campaign for COVID-19 in Mumbai, India, September 30, 2020. REUTERS/Francis Mascarenhas
by Priyanka Sethy October 1, 2020

As the COVID-19 pandemic began its sweep into South Asia, authorities and health-care professionals awaited the horrors they expected to inevitably follow. South Asia, after all, is challenged by rampant overcrowding and poverty, factors typically associated with the rapid spread of disease and overwhelmed facilities. Although the region is indeed reeling from the effects of the pandemic, one unexpected metric stands out: the low death rate among confirmed COVID-19 patients. As per the latest World Health Organization data, across the eight countries of South Asia around 2.4 percent of confirmed COVID-19 patients have died, compared to 14–15 percent of patients in Italy and the United Kingdom.

Although South Asian outbreaks initially lagged behind those in Europe, two months after India and Pakistan recorded their one hundredth COVID-19 cases, their fatality rates (confirmed deaths as a percentage of confirmed cases) were still significantly lower than some European countries two months after their respective one hundredth cases.

The low death rate in South Asia is puzzling for many reasons. First, considering the already overcrowded and relatively underequipped medical facilities and infrastructure in many South Asian countries, a higher, not lower, death rate would be more expected. Second, South Asia’s testing rate is still extremely low. When testing is limited, death rates are expected to be higher, as only those who fall seriously ill are tested, while less severe cases pass under the radar. This trend was exemplified in the United States, where the observed case fatality rate decreased as testing increased. Yet relatively few confirmed cases in South Asia have been fatal. Pundits and armchair experts have offered many anecdotal explanations, including tropical temperatures, obscure vaccinations, genetic exceptionalism, and weaker virus strains, to explain this variation. None seem to hold water with the scientific community. Although the virus is expected to spread marginally slower in warmer climates, seasonality is not expected to dampen its effect.

In parts of the region, most COVID-19 deaths are unrecorded, which artificially lowers fatality rates.

A plausible, but incomplete, explanation for this gap is the lack of reliable data surrounding COVID-19 reporting in South Asia. In parts of the region, most COVID-19 deaths are unrecorded, which artificially lowers fatality rates. For instance, doctors in some hospitals report being forbidden by their governments to mention the virus on death certificates. In India, the fact that even before the pandemic only around a fifth of all deaths were actually registered and medically certified complicates this problem. A recent article brought this issue to light, discussing how the lack of clarity among reporting procedures across the different states of India could be resulting in undercounting mortality from the virus. In Afghanistan, gravediggers report burying more than twice the number of daily dead than in pre-COVID times, some of whom are brought in secretly at night to avoid the stigma of COVID-19. However, even assuming South Asian states are dramatically undercounting data, COVID-19 fatality rates are still lower than expected, at around a seventh or eighth of those in European countries.

Part of the explanation for this puzzle could lie in the demographics. South Asia is young—the median age in the region is a sprightly 27.6, while that of Europe is around 40. The COVID-19 fatality rate increases exponentially with age. Although the overall fatality rate for adults in the 18–49-year-old range in the United States is estimated at 0.2 percent, more granular data from China, Italy, Spain, South Korea, and California shows that an infected  40 year-old has over double the risk of mortality that an infected 28 year-old does. This suggests that the median-aged South Asian has a lower chance of dying from COVID-19 if infected than does the median-aged European due to demographical differences alone.

The median age in South Asia is 27.6 years, compared to Europe where it's 40 years

Age, of course, is correlated with a host of other factors including level of development, and so underlying factors such as poverty or development could be driving the observed relationship. Yet when sorting through the potential explanatory mechanisms at play, age has the strongest scientific backing—clinical reasons can explain how COVID-19 disproportionately affects older populations. Older people have higher rates of preexisting conditions, weakened immune systems, and lung stiffening.

If age is indeed as significant a determinant of a country’s COVID-19 death rate as theorized, policymakers in South Asia should not overlook the implications of that finding for their older populations. An 80 year-old in South Asia could face the same age-related COVID-19 mortality risk as an 80 year-old in Europe. In fact, according to age-stratified fatality rate data from Bangladesh, Pakistan, and several other countries (see graph below), South Asian case fatality rates for each age category appear to fit right in with the global narrative. Far from being exceptionally low, they appear to be somewhat higher. This finding compounds with the fact that deaths are likely underreported in South Asia, where older people are more likely to die in their homes or shy away from seeking care. Thus, the true mortality risks are potentially higher than what the graph depicts. However, COVID-19 data from South Asia is incomplete and therefore potentially unreliable. Further, although age is an important source of variation in fatality rates, research shows that some variation remains even when accounting for age. This residual variation could have to do with data gathering, testing, and the underlying population’s health conditions.

Thus, if South Asia is “exceptional” in any way, it could be mostly in the fact that the region has proportionally fewer 80 year-olds or that data is unreliable rather than in claims of boosted immunity or lower disease spread in South Asia. This insight calls into question South Asian leaders’ recent lowering of precautionary measures, which they justify by citing low death rates. For instance, Pakistani politicians have cited the low case fatality rate to justify reopening the entire economy and doing away with lockdowns. In India, where the pandemic response has been criticized for low testing rates and a humanitarian crisis, not only did the Health Ministry claim full responsibility for the low death rates, but a top Indian epidemiologist also used the low death rate to argue for the controversial and perilous strategy of herd immunity. In each of these cases, South Asian leaders are comparing their fatality rates to those of demographically older regions in the world—Western Europe, for instance, in which most countries fall into the oldest quartile when sorted by median age. In fact, as the graph below shows, these higher mortality rates in the oldest-quartile countries are the anomaly. This high death rate is unfortunate but not unexpected, as risks from COVID-19 increase exponentially with age.

Using the fatality rate as justification to reduce caution against COVID-19 puts the elderly and other vulnerable populations in South Asia at just as much risk as it would anywhere else. The difference lies in the fact that such populations are concealed beneath a younger, healthier majority, which misleads the public into believing a dangerous myth of South Asian invincibility.

Priyanka Sethy is pursuing a PhD in government and political science at Harvard University. She is a former research intern at the Council on Foreign Relations, and previously worked as a research assistant at the Saltzman Institute for War at Columbia University and at Harvard Kennedy School's Evidence for Policy Design.