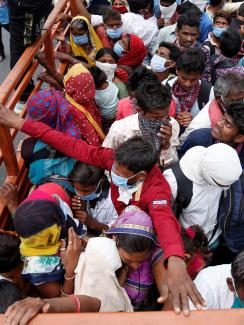 India migrant workers and their families in Ahmedabad board a truck to return to their villages on March 25, 2020 after India ordered a 21-day nationwide lockdown to limit the spread of coronavirus. REUTERS/Amit Dave
by Erik Fliegauf and Alyssa Ayres March 25, 2020

With about 1,600 official cases so far across South Asia, public health experts note concerns about a deficit of testing, detection, and reporting in the region, where medical access and sanitation are inadequate and populations are dense. The eight members of the South Asian Association for Regional Cooperation (SAARC) will meet for the second time over a videoconference on March 26 to discuss creating an integrated surveillance portal coordinating research. The association has set up a website to track developments and official case numbers. Meanwhile in India, as of March 24, fewer than 23,000 of 1.3 billion people have been tested for COVID-19. Moreover, economic disruption in a region of largely informal employment could leave millions without income or savings to weather the storm.

Here is where things stand country by country.

India is in Complete Shutdown

On Tuesday, March 24, Prime Minister Narendra Modi announced a national lockdown beginning at midnight, March 25, to last for twenty-one days. The national shutdown builds on state-level lockdowns announced earlier by thirty states and union territories. India’s health ministry announced 553 active cases and nine deaths as of 6:45 p.m. local time on March 25. The health ministry has denied any evidence of community transmission, although lessons from other countries suggest this could quickly change. Active cases are most numerous in the states of Kerala (105 cases) and Maharashtra (99). Fearing a worst-case scenario, India has taken strong measures to stave off disaster, including setting up labs across the country and upending daily life with restrictions on business and movement.

Lockdowns and Closures in Pakistan’s Provinces

Pakistan is on the cusp of a major outbreak, announcing its thousandth case on March 25—and that evening updating the number add twenty more cases, bringing the total to 1,020. More than four hundred are in Sindh province alone.

Pakistan banned international flights for two weeks beginning on March 21. In Sindh and in Pakistan-administered Azad Jammu and Kashmir, residents cannot go outside for any unnecessary reason for two and three weeks respectively. All non-essential businesses in the province of Punjab are closed, and Pakistan’s government officially summoned the nation’s military to enforce these restrictions. On March 22, Prime Minister Imran Khan swore off implementing a nationwide lockdown but urged citizens to stay inside and refrain from hoarding food.

Reports suggest Pakistanis returning from the Middle East were not tested and quarantined, and the cash-strapped government does not have the resources, facilities, or testing labs necessary to adequately confront the epidemic. New York Times reports that Pakistan in some cases has quarantined entire communities but some people who fear ostracism or hospitals themselves have “gone underground.” Doctors demand more equipment and protective gear from the government: Pakistan has just 2,200 ventilators, and a doctor is one of the country’s eight COVID-19 deaths.

Infighting has broken out within the Afghan government. The Ministry of Public Health accused the government of neglecting to provide resources to combat the coronavirus and predicted that one hundred thousand Afghans would die without government intervention. The ministry has called for a lockdown of Herat province, the center of Afghanistan’s outbreak where Afghans have returned from Iran in the thousands. But the government refused, citing “other aspects,” likely referring to both the economic costs on an impoverished population, and the diversion of resources and attention to delicate intra-Afghan videoconference negotiations with the Taliban. Afghanistan has at least eighty cases of coronavirus, and two deaths.

Authorities in Bangladesh have moved slowly when urgent action is needed, some experts believe.

While health authorities claim there is no community transmission in the country—only thirty-nine cases are confirmed with four deaths—just a few hundred tests have been conducted. Only one national lab in Dhaka is testing cases. The densely populated country of 160 million has also been slow to implement social distancing measures. But starting March 26, the government ordered all offices to close for one week, and asked citizens to stay at home unless necessary. The military will be deployed to enforce social distancing measures in towns and deliver medical equipment to hospitals. Doctors expressed skepticism about claims by Zahid Maleque, health and family welfare minister, that the country has enough testing kits and protective equipment.

An Abundance of Caution in Nepal

Although Nepal has just three cases, on March 23 authorities preemptively sealed borders with China and India to human passage, although goods will continue to move across. A one-week country-wide lockdown began March 24. Non-essential movement outside the house, including by car, is prohibited. The country’s police force is converting and reserving its own hospital for future coronavirus cases. A government minister said Nepal was “studying the Chinese model” and requesting tens of thousands of test kits, masks, and other equipment from China and India.

Sri Lanka has 102 cases of coronavirus and no deaths, according to the country’s health bureau. The Rajapaksa administration signed relief measures meant to bolster the country’s economy and established a 100-million-rupee fund for public health efforts. Sri Lanka instituted a stay-at-home curfew in eight districts from March 23 to 27, including the capital, Colombo. The curfew is heavily enforced—police arrested 1,600 people for violating the curfew on its first day. A confirmed case of a Sri Lankan pastor who had recently arrived from Switzerland and had contact with 150 people in the Northern Province informed the government’s decision to shut down the major highway connecting the province to the rest of the island. International flight arrivals are still suspended.

Bhutan Isolates from Outside World

In a speech reminding the people of Bhutan to stay united and informed, the king of Bhutan announced the closure of his nation’s land borders with India and China on March 23, as Nepal announced similar measures. Bhutanese returning to the country will be quarantined. Prime Minister Lotay Tshering said that economic measures are being drafted within the government, and instructed the nation’s famed gross national happiness commission to rework the budget. Bhutan has had two confirmed cases and has six thousand testing kits in stock.

EDITOR'S NOTE: This story was adapted from one posted a day earlier on the Asia Unbound blog by the same authors.

Erik Fliegauf is a Research Associate, India, Pakistan, and South Asia, at the Council on Foreign Relations (CFR).


Alyssa Ayres is senior fellow for India, Pakistan, and South Asia at the Council on Foreign Relations (CFR).