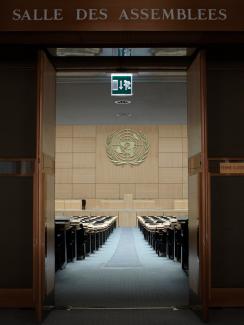 The entrance of the Assembly Hall is pictured in the United Nations European headquarters in Geneva on May 8, 2012. REUTERS/Denis Balibouse
by Ruth E. Levine January 24, 2020

Better health care for more people depends on blending sustained political will with technical expertise. The current momentum around universal health coverage in low-income countries can only realize its potential if donors invest in just that combination, advancing the integration of evidence into high-level decisions while strengthening the ability of civil society to hold governments accountable for their commitments.

The World Health Organization defines universal health coverage as a concept that means “people receive the health services they need without suffering financial hardship.” The concept underpins the organization and financing of health care in many rich countries (other than the United States), but has been advanced for all countries as a branded idea for more than ten years, principally with funding from the Rockefeller Foundation. The idea reached a milestone at the UN General Assembly in 2019 when UN member states adopted a high-level declaration [PDF], agreeing to pursue universal health coverage as a central priority.

The global agreement is the most recent sign of a wave of ambition around expanding affordable care that focuses on both major health conditions and financial risks to individuals and families. The governments of Uganda, Tanzania, Kenya, Ghana, and Senegal—and many low-income and lower-middle-income countries—have followed the lead of Mexico and other middle-income countries, declaring that they will orient their health policies so that people across the economic continuum are able to obtain quality care without having to impoverish themselves or go into debt.

At a high level, the political will seems to be there. Who wouldn’t want to promise good health and protection from catastrophic spending? But talk is cheap and health care is not. Translating promises into services that respond to citizens’ needs—particularly the needs of economically marginalized people—is a huge lift. To support that effort, donors in the health sector can focus on helping to design the benefits package and strengthening the ability of civil society organizations to keep governments honest about whether they’re delivering it.

Because no government can afford every possible health service for every citizen, tradeoffs have to be made

A benefits package should spell out what available services are guaranteed to which people. It says, for instance, how many prenatal visits a pregnant woman will receive, how many well-child visits her sons and daughters are entitled to, and what sort of treatment for both common and rare ailments are guaranteed to be provided without overwhelming cost. A benefits package isn’t a list of all possible care, or even all desirable care; it’s a list of the interventions and services that people can count on receiving—and count on being paid for by someone else if needed. That “someone else” in most cases is the government, either through direct service provision or through a public insurance program. It is that list, and all the delivery and financing mechanisms that need to be in place to make it available in the real world, that links politicians’ lofty words to the true promise of universal health coverage.

Arriving at a benefits package that is right for a given country is a task that includes negotiation around a society’s values, paired with iterative analytic work. Because no government can afford every possible health service for every citizen, tradeoffs have to be made. Do we place more value on the health of the young or the elderly? Do we want to provide care that will maximize life spans or enhance quality of life? And that’s just the start of the values-laden questions that have to be addressed. But those values questions can—and must—be informed by empirical analysis, and that requires strengthening the muscle of evidence-informed policymaking.

The data- and evidence-intensive questions that pop up when defining a benefit package include:

This is a very high-level overview of what many others have done tremendous work on, including and especially the International Decision Support Initiative and the Center for Global Development, which published the 2017 book, What’s In What’s Out: Designing Benefits for Universal Health Coverage.

As valuable as an evidence-informed benefits package is for the design of health service delivery and financing, its greatest value may be in the potential for communicating to everyday citizens what they can expect—and what they are entitled to—from their governments. In most low-income countries in which benefits packages have not been defined, few citizens understand what the government is responsible for providing. People may know, for instance, that there’s a government health center a few kilometers away where they can take their babies for immunization, or that they’d have to go to the district hospital in a larger town if they’re seriously ill. They may know what the operating hours are, and perhaps even which services are free and which ones require a few shillings, rupees, or CFA francs out of their own pockets.

Where a benefits package is [explicit], it’s much easier for citizens to know what they are supposed to receive and at what price

They probably are aware that if they need medicine, clean sheets, or even food during a hospital stay, they will have to bring their own. But there’s little or no way for them to know whether what they can get is more or less than what the government should be providing—and governments certainly aren’t taking steps to make that clear. In contrast, where a benefits package is defined and made explicit to the general public, it’s much easier for citizens to know what they are supposed to receive and at what price. That means they can tell whether, when they go for care, the services provided measure up to their expectations. They know what they are entitled to and can speak up if those entitlements are being denied.

In practice, the task of comparing what’s promised with what’s offered, and then calling out government for any shortcomings, falls to civil society organizations. In the health sector, there are particularly powerful opportunities for coalescing citizen groups because of natural affinities among people with the same health conditions and service needs (like HIV/AIDS advocates), as well as people in the same political jurisdictions and/or employment categories (like informal workers’ groups). Moreover, because there is universal appreciation of the value of good health and reasonably unambiguous ways to measure both health and service delivery, advocates have both moral messages and data to draw on for their work. The clarity of the government commitment as expressed in an explicit benefits package even paves the way for civil society organizations to pursue legal redress when the public sector falls short.

As more and more countries embrace the concept of universal health coverage, many donors to the health sector will seek ways to making universal health coverage a reality.  Fundamental contributions would be supporting the design of a sound, evidence-based benefits package and investing in civil society organizations that can monitor whether those benefits are being delivered.

In Global Health, What’s Past Is Prologue