Go to homepage
The Virus Inside the White House
Governance

The Virus Inside the White House

The drivers of the current White House outbreak are representative of the flaws in the U.S. response to COVID-19 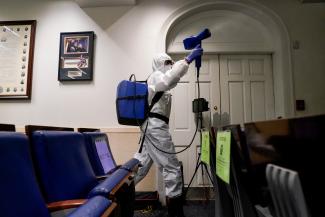 In February 2020, when the United States had confirmed just fifteen cases of the novel coronavirus, COVID-19, President Donald J. Trump promised U.S. cases would soon reach zero and that the virus would “just sort of disappear.” Eight months later, there are more than twice that many cases linked to the president and his close associates, and the virus has infected 7.3 million Americans and killed 210,000.

The drivers of the current outbreak sweeping through the White House are representative of the flaws in the overall U.S. response to the COVID-19 pandemic. The absence of robust contact tracing—including lack of full transparency and collaboration among local, state, and federal officials—and unclear, inconsistent, and often politicized risk communications have contributed to the spread of COVID-19 nationally.

A new Council on Foreign Relations (CFR)-sponsored Independent Task Force report underscores just that. The bipartisan Task Force, which we helped staff and which is composed of twenty-two leading public health and international policy experts, offers a comprehensive assessment of what went wrong in the early national and international responses to COVID-19.

The Task Force found that the U.S. government reacted to the pandemic too slowly; communicated in ways that were unclear, inconsistent, and too often politicized; and failed to develop a nationwide system for testing, tracing, isolating, and quarantining.

Suppressing the spread of this virus requires a comprehensive strategy. Though an essential component of a robust national response, testing on its own is not enough; relying upon only tests to prevent transmission may not catch infectious individuals who are still too early in their illness to record positive results. Mixed or false messages are dangerous. And non-pharmaceutical interventions, such as mask-wearing, social distancing, and avoiding large gatherings, from the individual to the national level, are essential in protecting oneself and one’s community.

Though an essential component of a robust national response, testing on its own is not enough

As with the White House outbreak, insufficient testing and contact tracing strategies have deprived U.S. public health authorities of information needed to gauge the extent of spread, stop chains of transmission, and design targeted public health interventions. Moreover, the failure of senior federal and state government officials to communicate science-based evidence clearly and quickly has fostered ideological divisions and given life to the misinformation and conspiracy theories rampant on social media.

The crisis in the White House has emphasized that this pandemic is far from over and much remains uncertain. However, the CFR-sponsored Task Force report provides a road map not only for what the United States and the international community can do during the next stages of the current pandemic, but also how to prepare for when the next pandemic threat inevitably emerges.

To address the failures illuminated by the Task Force report and by the pathogen’s spread among the highest levels of the U.S. government, U.S. leaders and the American public should follow expert advice, including on wearing masks, avoiding large indoor gatherings, quarantining, and social distancing. Individual actions matter in a pandemic, and it is imperative that elected officials lead the nation by example, grounded in scientific guidelines and best practices.

U.S. officials, including the president, should also avoid statements that undermine or dismiss the severity of this disease. The country cannot afford to see public health messages muddled or discounted because they are couched in partisan messaging that seeks to downplay or exaggerate dangers or necessary precautions.

Above all, the White House and U.S. Congress should act immediately on the recommendations put forth in the Task Force report

Above all, the White House and U.S. Congress should act immediately on the recommendations put forth in the Task Force report and by public health officials around the country on how to respond to this pandemic and prepare for future public health crises, which inevitably emerge.

The United States should approach pandemic preparedness with the same seriousness with which it treats national defense; health security is national security. Any delay in accepting and responding to that reality comes at the unacceptable price of American lives and livelihoods.

EDITOR'S NOTE: The authors contributed to the production of the CFR-sponsored Independent Task Force. All statements and views expressed in this article are solely those of the individual authors and are not necessarily shared by the Task Force or its membership.


Terrence Mullan is assistant director of the International Institutions and Global Governance program at the Council on Foreign Relations.

Racism as a Public Health Crisis