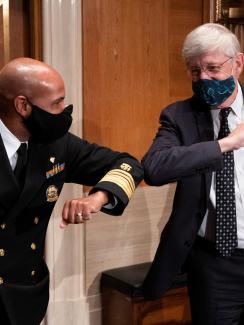 I have spent my life in science, admiring and working alongside the doctors, researchers, and scientists who lead the United States’ most respected public health institutions—the Centers for Disease Control and Prevention (CDC), the National Institutes of Health (NIH), and the Food and Drug Administration (FDA). Watching these celebrated individuals and institutions crumple and bow to political pressure and seeing their lives’ work and their reputations warped by Operation Warp Speed is one of the most distressing experiences of my life.

The clinical trial protocols released by Moderna, Pfizer, AstraZeneca, and Johnson & Johnson suggest U.S. public health leaders are once again bending over backward to accommodate political considerations. The clinical trials, designed and approved by the NIH, are far removed from what most experts would consider rigorous testing. They are not designed to assess whether the vaccines will prevent infection, nor are they designed to prove that the drugs will save lives. They are not even chiefly focused on whether the vaccines will improve severe cases of the disease—the kinds of cases that have killed over a million people worldwide. Instead, the trials are designed to rapidly approve treatments based on whether they improve mild cases of COVID-19, which often resolve on their own without any medical intervention. This trial process is not a true test; it is equivalent to a rubber stamp of approval by the NIH regardless of a vaccine’s ability to affect the course of the pandemic.

The relentless focus on a quick fix is inflicting serious damage on public health institutions and undermining public confidence in health-care leaders at a time when they are needed most. A recent Kaiser Family Foundation poll found that public trust in the CDC and the leaders of other public health institutions has dropped 10 percent since April of this year. And two-thirds of Americans worry that political pressure from the Donald J. Trump administration will lead to approval of a vaccine that is not yet proven safe or effective—I do not blame those who feel this way.

At the outset of the pandemic, the nation’s testing failures and supply shortages were a stark reminder that U.S. public health institutions were not prepared for an outbreak that many had predicted, in one form or another. Although some were quick to lay blame at the feet of the Trump administration, it soon became apparent that the chaos and dysfunction bled well beyond the White House walls.

In late March, the FDA—the agency responsible for protecting Americans from unsafe and ineffective drugs—granted an emergency use authorization (EUA) for hydroxychloroquine as a treatment for COVID-19, despite a lack of proof that hydroxychloroquine was effective and knowing that the drug could be dangerous for some patients. Six weeks later, the FDA buckled under mounting evidence that the drug did not work and revoked the EUA.

But the agency did not learn its lesson. It soon granted another emergency authorization for remdesivir, an investigational antiviral treatment—a move based on preliminary results from a clinical trial run by the NIH. The NIH claimed in a press release that the drug helped patients recover more quickly but refused to release the data for doctors to review for themselves. Three weeks later, the NIH published the full findings, which showed the treatment was not as it appeared—although the drug could have successfully reduced the time to release from hospital for people with milder cases of COVID-19, it was never clear whether the drug spared anyone from the long-term consequences of the disease. Moreover, the treatment was proven to have no effect on mortality. Still, the government claimed success, and Gilead, the manufacturer of remdesivir, reaped the rewards, selling their five-day course of treatment—which can only be administered in hospitals intravenously—to governments and insurers for thousands of dollars per patient.

The FDA’s rollout of its most recent EUA for convalescent plasma—accompanied by misleading data about the benefits of the treatment—makes clear just how drastically America’s public health agencies have been manipulated for political purposes. With the NIH fast-tracking a vaccine toward approval on a timeline that seems more aligned with political convenience rather than public health, the fear that a dangerous drug could be widely distributed is more immediate than ever.

Let me be perfectly clear: there is no magical cure that will bring the pandemic to a rapid end. Any suggestion of a vaccine or quick-fix treatment by the end of this year is magical thinking, and magical thinking will not end the nation’s suffering. The way to end this pandemic quickly is through the forceful implementation of sound public health principles—principles that public health agencies should have been vigorously enforcing from the start.

Two simple ideas could bring the pandemic to an end within three months: home testing and home isolation. Frequent, universal home testing using a saliva-based rapid test—akin to a home pregnancy test—would quickly identify who is infected and who is at risk. Home isolation could be implemented in a way that recognizes the importance Americans place on personal freedoms, with financial support to make up for lost wages and cover medical supplies and other necessities given to families who test positive.

The cost for this effort, which is estimated at $100 billion, is far less than the trillions being lost in joblessness, business closures, and health-care expenses today. It is not too late for public health leaders to reverse course and focus on the approaches that will save the most lives today. The leaders of America’s most valued public health agencies have a responsibility to stand up in the face of political pressure and bear down against those who would force them to follow a scientifically unsound path.