Go to homepage
Just How Do Deaths Due to COVID-19 Stack Up?
Governance 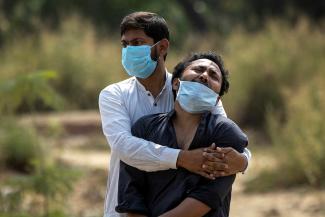 A man is consoled by a relative during the burial of his father, who died of COVID-19, in New Delhi, India, on April 16, 2021. REUTERS/Danish Siddiqui
by Christopher Troeger May 12, 2022

Since the start of 2020, based on official counts, COVID-19 has killed more than 6.7 million people, including more than 975,000 in the United States, 760,000 in Russia, 660,000 in Brazil, and 515,000 in India. But these tallies may substantially underestimate COVID-19's true death toll. In fact, some estimates suggest the total number of deaths could be more than two times as large as reported globally and more than ten times greater than what's been reported in some countries.

The scale of loss is staggering, but the huge numbers are difficult to understand without context. It can be helpful to consider how COVID-19 ranks as a cause of death around the world, and some of the factors driving those trends.

Looking at official statistics alone, COVID-19 was the fourth leading cause of death globally, accounting for one in 20 deaths worldwide since the beginning of 2020. After accounting for unreported deaths, the total toll could move deaths due to COVID into the slot for second leading cause of death, responsible for an estimated 16.99 million deaths, or one out of every ten deaths.

About half of people globally live to the age of 70 before they die, so causes of death that tend to kill older adults, such as ischemic heart disease and stroke, predominate among the most common causes of death. COVID-19 mortality is similar in that it kills very few young children and adolescents but becomes sharply more dangerous with age and disproportionately kills people over 70 years old. A recent analysis found that different age structures—and the fraction of the population affected in each age group—could explain almost half of the variation in the risk of mortality between countries.

Despite improved treatment and the growing, but inequitable, availability of vaccines and therapeutics for COVID-19, there were almost 1.8 million more reported deaths in 2021 compared to 2020. This is probably related to the emergence of the delta variant, which was much more likely to lead to fatal outcomes compared to the ancestral variant, and the omicron variant, which despite being less severe than the ancestral variant is much more transmissible. The ratio of estimated total deaths to reported deaths was nearly the same in 2020 and 2021 at the global level, suggesting that changes in surveillance and reporting mechanisms do not entirely explain the increase in deaths at the global level. While some countries had fewer deaths due to COVID-19 in 2021 compared to 2020 (21,000 fewer in Spain, 11,000 fewer in Belgium, and 10,000 fewer in Italy), other countries had many more deaths in 2021 (325,000 more in Russia, 230,000 more in Brazil, and 190,000 more in India).

COVID-19 Deaths by WHO Region

In contrast, a handful of countries and territories—including China, Taiwan, Thailand, and New Zealand—acted rapidly to control the spread of COVID-19, and kept their death counts low, even after accounting for deaths that may be missing from official statistics. Countries in East Asia may have been well prepared for COVID-19 thanks to strong infectious disease surveillance systems they developed in response to recent respiratory disease outbreaks, such as influenza H1N1 and Severe Acute Respiratory Syndrome (SARS). When COVID-19 arrived, South Korea and Taiwan were quick to test and trace infections and embraced mask-wearing, due in part to a culture of mask use during influenza season. Also, Australia and New Zealand acted quickly, enacting strict international and domestic travel restrictions and social distancing mandates, likely helping them sustain low levels of transmission; however, they have dropped their zero-COVID policies during the omicron variant era and case counts have been much greater than before. China has maintained its zero-COVID policies with mixed effectiveness at limiting the current surge in major cities, including Shanghai.

COVID-19 has also been the leading cause of death in many Latin American countries such as Argentina, Brazil, Colombia, Mexico, and Peru. The Americas and Europe accounted for almost 80 percent of COVID-19 deaths globally, even though they represent only about a quarter of the world’s population. The five countries where COVID-19 represents the largest fraction of all deaths are from Latin America (Peru, Mexico, Colombia, Paraguay, and Chile). The way that people die has been dramatically changed in many places, but by this measure, the distribution of deaths has shifted by the largest amount in Latin America. Two of the top five countries in terms of number of deaths caused by COVID-19 are in Latin America (Brazil and Mexico).

In contrast, COVID-19 as reported, has not been a leading cause of death in much of the African, Southeast Asian, or Western Pacific Regions. However, when considering underreporting and correcting for total COVID-19 deaths, COVID-19 may be among the leading causes of death in many countries in sub-Saharan Africa. Countries in these regions tend to have a higher overall burden of infectious diseases compared to countries in Europe or North America. One analysis suggests that undercounting of COVID-19 deaths may contribute to these patterns. Although it is an issue worldwide, the fraction of missed COVID-19 deaths might be highest in South Asia and sub-Saharan Africa. Once we account for total COVID-19 deaths, some of the lowest mortality rates in the world are countries and territories that have most aggressively limited spread such as China, Taiwan, New Zealand, and Nicaragua.

Why are COVID-19 deaths lower in some regions and locations? Research suggests that a variety of contextual and population-health factors might explain some of the variation including age patterns (about 50 percent), country wealth (measured as gross domestic product per capita, about 3 percent), and average body mass index (about 1 percent). This leaves a substantial amount of variation unexplained. Other factors that may contribute include decisive and effective government responses, international coordination in response and diagnostic testing, income inequality, and lower rates of chronic diseases including obesity and diabetes. Seroprevalence studies have also found a lower risk of death among people with COVID-19 in some settings compared to others before accounting for estimated underreporting of deaths. Public trust in government and other people is associated with better adherence to policies meant to reduce mobility and in COVID-19 vaccine uptake. Further, trust in institutions, scientists, and health authorities is associated with behaviors like mask wearing, handwashing, and belief in the importance of community action to respond to the pandemic.

Top Five Causes of Death in the United States

When the causes of death are ranked in this article, it assumes that estimates for non-COVID-19 causes would remain the same in the absence of COVID-19. But this may not be true. During the pandemic, researchers have noticed decreases in injuries and road traffic deaths due to lower mobility, have observed decreases in routine health-care utilization potentially affecting mortality due to chronic but treatable diseases, decreases in other respiratory diseases like pneumonia, and other changes in disease burden. Another consideration could be that in locations with complete or near complete vital registration systems, such as those in the United States, deaths originally determined as a non-COVID-19 cause were actually caused by COVID-19, potentially changing the ranking of causes of death presented in this post.

The future of COVID-19 is impossible to predict, yet there are some indications that fewer people will die in 2022 compared to the previous two years. Combined with vaccine coverage, widespread immunity from the highly transmissible and less severe omicron variant will likely provide protection for most people worldwide. As mask and social distancing mandates are lifted in many places due to declining case and death counts, governments should use the opportunity to strengthen surveillance systems including the availability of COVID-19 tests, data analytic capacity, and reporting completeness and timeliness. It remains urgent to expand the availability of vaccines and highly efficacious antiviral therapies in all settings and ensure that all people have the opportunity to receive them, no matter where they live.

People all over the world are grief stricken at the loss of friends, family members, and neighbors, and the disruption to their communities and livelihoods. As individuals and societies, we must all work to prevent COVID-19 from being a leading cause of death.

ACKNOWLEDGEMENTS: The author would like to thank Katherine Leach-Kemon for her support on the article and to thank Catherine Bisignano, Katie Welgan, Emma Castro, Erin Frame, Rebecca Sirull, and Professors Robert Reiner and Emmanuela Gakidou for their feedback and fact-checking.

EDITOR'S NOTE: The author is employed by the University of Washington's Institute for Health Metrics and Evaluation (IHME), which produced the COVID-19 forecasts described in this article. IHME collaborates with the Council on Foreign Relations on Think Global Health. All statements and views expressed in this article are solely those of the individual author and are not necessarily shared by their institution.