Go to homepage
After the Mandates End
Governance

After the Mandates End

Preparing for the next COVID-19 variant 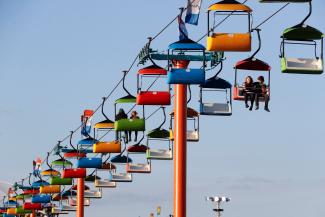 The omicron wave of COVID-19 continues to wash over the world infecting 50 percent or more of the population, according to an analysis by the Institute for Health Metrics and Evaluation (IHME). As predicted in the third week of December, omicron surges are followed in most, but not all, places by a rapid decline in cases, then decreases in hospitalizations, and finally a drop in deaths.

The global wave of a new omicron subvariant, BA.2, should wane by April and many governments are already dropping mandates

The emergence of BA.2, a subvariant of omicron, is causing an extended surge in COVID cases in Denmark. Northern Ireland, Cyprus, and Finland saw secondary increases in transmission after an initial decline, and England, Greece, and Austria have seen sustained transmission after an initial decline. Despite these variations, the global trajectory of the much less severe omicron variant seems clear: by early April, the omicron wave—except in China—should be over. China, due to its comprehensive lockdown approach, may witness an extended omicron wave but it is unlikely lockdowns will completely stop it. Many governments—including Denmark, the United Kingdom, the Netherlands, and some U.S. states and Canadian provinces—have already recognized these trends and have dropped mandates.

With declining case numbers and hospitalizations, many other governments will follow suit in the coming weeks. The era of government mandates for vaccination and non-pharmaceutical interventions (NPIs), such as wearing masks, is likely coming to an end, although some governments may drag out the process

COVID-19, however, is not gone. Even without the emergence of a new variant, waning immunity and seasonality suggest that another omicron wave will occur in the northern hemisphere in winter and perhaps also in the southern hemisphere winter—although, it will be quite small. The wave will not cause as many deaths as previous ones. New variants are likely (but not guaranteed) to emerge with some combination of immune escape—when a mutated form of the virus evades your immune system's ability to fight it off—and higher transmissibility that allow them to outcompete omicron.

Even as the world accelerates toward post-mandate normalization, we need to take concrete actions now to mitigate the risks of future COVID-19 surges fueled by new variants. There are many actions that should continue to be pursued, such as persuading the hesitant to get vaccinated. But there are five measures that we and our IHME colleagues think need enhanced policy and public attention.

Four steps would improve our ability to react to future variants, including a commitment to reporting critical data on cases, hospitalizations, and deaths disaggregated by vaccination status, prior COVID-19 history, age, and sex within the past twenty-four hours. These data would provide powerful information on how much the virus can escape immune protection and trends. While some governments, such as Israel and England have been leaders in timely data release, others such as the United States (particularly the Centers for Disease Control and Prevention) have been slow to report on anything but the simplest tabulations. Concerns about slow reporting can be mitigated by reporting data that show both the day of reporting and the day of event, allowing users to understand the lags in reporting from the data sources.

More detailed reporting by all jurisdictions at the second administrative unit level—by county, municipalities, or districts—of cases, hospitalizations, and deaths could alert each locality and the world earlier when there is the emergence of new, more transmissible variants. Omicron started to cause increased case numbers in late October in some parts of Gauteng province in South Africa. Having that information four weeks earlier—that a potential new variant was emerging—could have altered its trajectory. Supplementing data on cases, hospitalizations, and deaths with a routine periodic infection survey or measurement of seroprevalence would be beneficial. The United Kingdom's Office for National Statistics collects a random sample survey every two weeks to test the prevalence of PCR-positive infection. If this sort of information was collected throughout the world, we would have realized many months ago the much greater extent of COVID-19 transmission in sub-Saharan Africa. Understanding the extent of transmission is absolutely critical to understanding where the highest-risk groups remain in the world, namely the unvaccinated and never infected. Finally, while there has been great progress in expanding the capability for genomic sequencing of COVID-19 isolates, more progress is needed in building lab capacity for this crucial step in identifying and tracking new variants.

The antiviral medication Paxlovid reduces COVID-related hospitalization and death by 88 percent, according to clinical trials. Other antivirals have beneficial effects in COVID-19 patients, as well, and more are in development. Antivirals that reduce hospitalizations and mortality by this degree are fundamentally a game changer. Even if variants as severe as delta and as infectious as omicron with similar immune escape come along, reducing the infection-hospitalization and infection-fatality rates by 80–90 percent would dramatically alter the global impact and reduce the burden on hospitals. The problem is production capacity for Paxlovid; so far, only 30 million doses are expected by June 2022. Even if targeted to those over 65 and people with multiple illnesses that place them in a higher risk group, this production capacity would not be sufficient during a major surge of a more severe variant. Likely, low-income countries will have little or no access to antivirals on the current trajectory. Antiviral production and access must be prioritized. Equitable access to antivirals is as important as vaccine equity and requires concerted action.

The development of COVID-19 vaccines in record time has dramatically reduced global deaths. There is now a wide set of vaccines available with varying effectiveness and duration of immunity. Trials for these vaccines were not designed to measure the efficacy of the vaccines for preventing infection. The closest attempt was in the AstraZeneca clinical trial, which found 70.4 percent for symptomatic disease but 55.7 percent for preventing infection, as detected through nasal swabs. Based on these findings, the IHME model since December 2020 has assumed vaccines were less effective in preventing infection than severe disease, even against the ancestral variant.

Given seasonality and the emergence of the alpha variant, the implication has been clear for more than a year: vaccination would not be an effective strategy to block infection to reach herd immunity. Evidence from post-vaccination studies such as those conducted in Israel, England, Canada, and the United States has shown that vaccine-derived immunity wanes quickly for preventing infection and by twenty weeks, some vaccines are less than 50 percent effective at preventing COVID-19 infection. More recently, vaccine effectiveness in preventing omicron infection is also markedly lower. Although the prospect of infection control through vaccination has been unlikely from the start, some countries, such as the United States, have pursued a strategy fundamentally grounded on the idea that if a certain percentage of the population gets vaccinated then the epidemic will be over. Such a profound potential externality has been the primary justification for government vaccine mandates. Our current vaccines are not up to this task, as the high rates of omicron infection in people who are vaccinated has demonstrated. But this does not mean infection-blocking vaccines cannot be developed. Currently in development are some vaccines that may provide mucosal immunity in the nose. An infection-blocking vaccine could substantially alter our future control strategies, and both industry and research agencies—such as the National Institutes of Health in the United States—should invest in these second generation vaccines. Some platforms appear to allow production at scale with relatively simple technology.

Mask use and social distancing profoundly altered COVID-19 transmission pre-omicron. The virtual disappearance of flu as a cause of death in the northern hemisphere during the winter of 2020–21 indicates the effectiveness of these measures. IHME statistical analysis of R-effective—the number of infections causes by an infectious case on average—also clearly shows the profound influence of mask use and other NPIs. More research is needed to disentangle which NPIs have been the most effective and how many lives have been saved so far through mask use and other NPIs. Mandates during 2020 and 2021 were justified on the grounds of the externality from individual actions. We needed them to reduce transmission and buy time to develop and produce vaccines.

In 2022, however, during the omicron wave, the justification for NPI mandates is much weaker. Omicron is massively more transmissible, and with 10 percent or more of the population at the peak actively shedding virus, individual efforts that reduce the risk of transmission by 50 percent may not translate into much difference at the population level. Going forward, with higher levels of population immunity through infection and vaccination and increasing access to antivirals, individual risk for most people will be much lower still. Risks will certainly not be zero but will be commensurate with other risks that society has been willing to accept, such as the risk of death from road traffic accidents or from seasonal flu. Even if in the future mandates for NPIs, including mask use, may not be justified on the grounds of a major externality (my action protects more than myself), we can and should promote mask use and social distancing in the vulnerable (people who are immunocompromised, those over 65, those with comorbidities under 65, and those who live with high-risk individuals) when and if a surge occurs. Developing a metric to inform the public when we need to use mandates and educate them that the recommendation change could help. Changing culture so that it is accepted and expected that individuals at risk protect themselves will help empower people to protect themselves when needed.

Throughout the pandemic it was clear that many localities did not have the analytical capacity to use the available data to guide policy and recommendations. Many were missing tools to combine different data sources, manage the flow of data, and conduct a proper analysis of the current situation as well as what lay ahead. There is a need for the development of tools that can be shared with others, irrespective of their statistical or epidemiological capacity. Indeed, many donors and governments invest in data collection but not in analysis and reporting. IHME's previous experience has enabled us to move into weekly projections of COVID-19. Empowering others to use such tools and techniques would be critical for countries to own their data and build policies.

Other efforts are needed to prepare for future pandemics, as well, including building lab capacity; strengthening public health institutions' abilities to support testing, tracing, and quarantine; enhancing capabilities to model pandemics; greatly expanding the pandemic response workforce and building capability to rapidly develop diagnostics, vaccines and therapies for new pathogens. The five actions we have laid out here can help us normalize how society responds to pandemics while at the same time protecting ourselves against the very real threat of a new transmissible and severe COVID-19 variant in the future.

Dr. Christopher Murray is institute director of the Institute for Health Metrics and Evaluation (IHME), University of Washington.