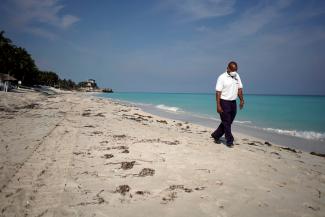 A security agent wearing a protective mask walks on the beach during the COVID-19 pandemic, in Varadero, Cuba, on April 10, 2020. REUTERS/Alexandre Meneghini
by Katherine Leach-Kemon, Elizabeth Serieux, Christopher Troeger August 24, 2022

In the United States, the antiviral Paxlovid is plentiful—supply outweighs the demand for the drug, in part due to physicians' lack of knowledge about it, concerns about potential interactions with other medications, and low public awareness. Sluggish demand for Paxlovid is also a product of the short window of time in which it must be prescribed (within five days of developing symptoms) and uneven access to health care rooted in causes such as systemic racism and redlining, government policies that discouraged investment in predominantly Black communities by classifying them as hazardous.

Recently, two of co-author Katherine Leach-Kemon's relatives at high risk for severe illness from COVID-19 were able to obtain Paxlovid quickly after testing positive for the first time, and both went on to experience only mild symptoms. In contrast, in Saint Lucia, in the Caribbean, where co-author Elizabeth Serieux was born and raised, people who have a higher risk of dying from COVID-19 cannot get the drug—it is nowhere to be found in the country.

Paxlovid is a "miracle" drug, reducing the chance of hospitalization and death for COVID-19 by about 90 percent among people who face the greatest risk from the disease. Yet its benefits remain out of reach for most of the world except in high-income countries. If a deadly new COVID variant begins to circulate, lack of access to Paxlovid could have tragic consequences.

"In a major surge, in case we have a new escape variant, Paxlovid could make a big difference in saving lives," says Ali H. Mokdad, professor of health metrics sciences at IHME and the chief strategy officer for population health at the University of Washington. "We are monitoring BA.6; it is competing with BA.5, but we do not know if it is more severe."

The World Health Organization (WHO) recommends that older adults, people with high-risk conditions, and individuals who are not vaccinated against COVID-19 receive antivirals if they develop COVID-19. While people who are over the age of 70 and those living with high-risk conditions make up the largest share of the population in high-income countries, most unvaccinated people live in low- and middle-income countries. Unfortunately, high-income countries have bought up nearly all available supplies of Paxlovid. However, thanks to a voluntary licensing agreement between the Medicines Patent Pool and Pfizer, 95 low- and middle-income countries will be eligible to purchase generic versions of the drug once they become available, likely at the beginning of 2023. Despite this agreement, equitable access to Paxlovid remains elusive, and many middle-income nations are left out.

Percentage of People Over 70 Years Old

IHME forecasts that scaling up antiviral access could save the lives of more than 9,000 people globally by November 1, 2022. The potential for the number of lives saved by antivirals could increase quickly if a variant emerges that is deadlier than BA.5. The twists and turns of the COVID pandemic since March 2020 have demonstrated how fast a new variant can spread, especially as the seasons change. The impact of a dangerous variant could be profound, particularly as people's immunity from previous infections or vaccination fades over time. Instead of waiting for another crisis to hit, ensuring that all countries have access to this powerful new tool, Paxlovid, could prevent mass death.

In Lebanon, a lower-middle-income country in the throes of its worst economic crisis in centuries, Paxlovid is not available (the country is not included in Pfizer's licensing agreement with the Medicines Patent Pool), but some individuals with resources or political connections are managing to gain access, according to Mokdad, who is Lebanese American.

"Some Lebanese are getting it through family members here in the United States, but only the affluent," Mokdad adds.

For middle-income countries such as Saint Lucia and Lebanon, which are not covered by the Medicines Patent Pool's licensing agreement with Pfizer, the main route to accessing the drug is via compulsory licensing, which is a process where governments can produce—or allow another entity to produce—an on-patent medicine without obtaining permission from the company that holds the patent. But compulsory licensing is no easy path. For example, as highlighted in the PLOS blog Speaking of Medicine and Health, Pfizer has pushed back strongly against advocacy groups' efforts to secure this lifesaving medicine by advocating the use of compulsory licensing for people in the Dominican Republic.

Percentage of People Who Are Unvaccinated

It's not just countries left out of the agreement that are having difficulties obtaining Paxlovid. Even the 95 countries covered by the licensing agreement are experiencing delays in accessing the medication according to WHO, and the ingredients that are required to make Paxlovid are in short supply.

"Our organizations are still trying to finalize with Pfizer the appropriate terms and conditions for low- and middle-income countries," said Tedros Adhanom Ghebreyesus, director-general of WHO, in a news conference. "This is delaying access and some countries may choose to wait for a generic version of the antiviral, probably available only early 2023 and this will cost lives," he continued, calling on Pfizer to work closely with health agencies and countries to ensure its new oral antiviral is available quickly and effectively.

Another barrier to acquiring Paxlovid is its reportedly high cost. For many countries that are included in the licensing agreement, Paxlovid may be too expensive. Upper-middle income South Africa, for example, has decided not to purchase the drug for patients seeking treatment for COVID-19 through the public sector, saying that the drug "does not add value" and is "extremely expensive."

An added challenge could be the possibility that people will need to take double the number of Paxlovid pills that are currently recommended to prevent "Paxlovid rebound." Paxlovid rebound occurs when a person takes the medication, their symptoms disappear and they test negative, and then they experience a recurrence of symptoms and test positive again.

Paxlovid "rebound" occurs when a person takes the drug, their symptoms disappear and they test negative, then they experience a recurrence of symptoms

"We know now that Paxlovid rebound is very common and there are talks to change the regimen from five days to ten days," explained Mokdad. "This would be similar to the vaccine situation when rich countries started giving three or four doses while other countries had no vaccines," he added.

When will countries gain access to Paxlovid? It will be hard to tell. Complicating efforts for monitoring the distribution of Paxlovid worldwide is that there is no publicly available data, prompting WHO to call for greater transparency from Pfizer about distribution of the drug. The lack of data on Paxlovid contrasts starkly with the plentiful data on COVID-19 vaccination country-by-country.

Now in the third year of the COVID-19 pandemic, an estimated 17 million people have died from the disease, and even more have suffered the consequences of lost loved ones, destroyed livelihoods, and school disruptions. Low- and middle-income countries were last in line for COVID-19 vaccines, and their health, economies, and schools have been the most heavily affected by the pandemic. IHME estimates that 82 percent of the total number of people who have died from COVID-19 lived outside of high-income countries. The effects of lost learning and economic devastation will likely be felt for years to come, with ripple effects throughout the world. By denying equitable access to COVID-19 treatments such as Paxlovid, high-income countries are making the same mistakes that they made with the vaccine rollout and are poised to further exacerbate disparities between high-income and low- and middle-income nations. But learning from the past is still possible—high-income countries must act with urgency to make Paxlovid available to people everywhere before a new, more severe variant begins to circulate.

EDITOR'S NOTE: The authors are employed by the University of Washington's Institute for Health Metrics and Evaluation (IHME), which produced the COVID-19 research described in this article.  IHME collaborates with the Council on Foreign Relations on Think Global Health. All statements and views expressed in this article are solely those of the individual author and are not necessarily shared by their institution.

ACKNOWLEDGMENTS: The authors would like to thank Rebecca Sirull for fact-checking assistance, and Professor Ali Mokdad, Stephanie Durr, and Thomas Bollyky for providing feedback on the draft.


Elizabeth Serieux, PhD, MPH, CHES, is the Senior Engagement Officer at the Institute for Health Metrics and Evaluation (IHME) at the University of Washington.

Poised for an ambitious vaccine rollout, the country must use all tools available to mitigate the worst of the pandemic