It's Time for Leadership That Looks Like the People It Serves

To build trust, the Biden administration should fill the government with decision-makers as diverse as its population 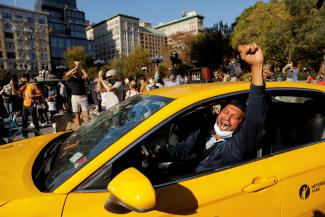 The world is looking to the United States for leadership again. Over the course of 2020, Americans have been awash with uncertainty as the nation floundered with COVID-19 response and braced itself for a historic election. With families and communities devastated by health and financial hardship, the country has broken the type of records no one hopes for: sky-rocketing rates of COVID-19 transmission and hospitalization. The 2020 presidential election, as intense and contentious as expected, gave voice to many in the country who felt they had been forgotten. With the pandemic far from over, there is clearly much work to be done. But there is something new: hope.

Is the world ready to welcome the United States back with open arms?

This hope extends beyond the country’s borders to the global community that watched as the American public deliberated. In the wake of the election, world leaders from Canada’s Prime Minister Justin Trudeau to Germany’s Chancellor Angela Merkel to World Health Organization Director General Dr. Tedros Adhanom conveyed warm congratulatory remarks to President-Elect Joseph R. Biden and Vice President-Elect Kamala Harris. But after years in which the United States has ruptured diplomatic ties, announced its departure from the World Health Organization (WHO), and rejected global solidarity despite an ongoing international crisis, is the world ready to welcome the United States back with open arms?

With a new presidential administration, the world might start looking towards the United States for leadership once again. But it will take trust and a new type of leadership. The question on all our minds is what type of leadership will the Biden-Harris Administration bring to COVID-19 response. To “build back better,” the new administration must encourage trust and transparency – beginning with filling the new government with decision-makers as diverse as the population it represents.

Diversity in Leadership and Thought

Effective governments include leaders who are representative of the people they serve. We know from previous emergencies and health crises that women are disproportionately impacted, with increased caretaking responsibilities and decreased access to sexual and reproductive health services as well as domestic abuse support. Across the board, women and gender minorities experience a different set of challenges that are often under-prioritized in a rapid response to a crisis. Although women compose over 70 percent of the U.S. health workforce, they hold fewer than 20 percent of leadership roles. This pattern is reflected around the world, where over 85 percent of national COVID-19 task forces are composed of a majority of men.

Although over 70% of the U.S. health workforce is composed of women, they hold less than 20% of leadership roles

Inclusive decision-making is not only more ethical, it leads to more innovative and effective solutions. More than filling a quota, this requires institutional change that empowers and enables inclusive and intersectional participation. Leadership that is diverse by race, gender, sexuality, and ability can bring forward previously ignored perspectives and focus attention on overlooked populations. This wider range of representation inspires trust from all corners of society by signifying that all individuals’ interests are being considered.

On an international scale, COVID-19 task forces are heavily focused on medical and epidemiological expertise – often excluding the non-health expertise of social scientists and the explicit concerns of vulnerable populations. Pandemic response also requires anthropologists, communication experts, gender and human rights advocates, civil society representatives, and a wider range of frontline health-care providers that includes nurses and midwives. Without this multi-disciplinary expertise, plans for response and recovery risk being one-sided and siloed, rather than integrated.

The ongoing COVID-19 response led by the White House Coronavirus Task Force has been subpar. Many were surprised when Vice President Michael R. Pence, a politician with little to no expertise in health emergencies, was named the chair of the Task Force in February. This move reflects the Task Force overall – a team of bureaucrats, with only a handful of members with backgrounds in medicine or public health. Notably, this group also lacks diversity in race and gender. So it is hopeful to see a departure from this norm with the Transition COVID-19 Advisory Board that Biden and Harris announced in mid-November. Their announcement includes not only a list of doctors and public health experts (both men and women of Indian, Caribbean, and Latinx descent), but also biographical information describing these individuals’ qualifications and the justification for their appointment to the group.

The current administration’s response has been characterized by aggressive language and a rejection of global and scientific cooperation, rather than transparent decision-making. Thus far, the Biden-Harris plan emphasizes clear and concise action, led by a team of experts that looks more like the American population. The new administration has also expressed its intention to maintain relationships with the WHO rather than cast blame and walk away, offering hope for a collaborative international effort that is necessary to control a pandemic.

Trust is essential to effectively responding to a pandemic and the current high volumes of misinformation and vitriol surrounding COVID-19 response efforts have demonstrated how threadbare our social fabric is in this moment. Diverse voices that bring in varied perspectives across race, gender, and professional backgrounds will help response programming and interventions reach all corners of society. Additionally, many of these voices call for a return to global solidarity to respond to this worldwide crisis.

Ethical leadership does not work in an authoritarian silo, but fosters trust through honesty and transparency. With recent promising announcements in vaccine development, there is a need to consider fair and equitable distribution of vaccines in order to reach the people that need it most. So how can the Biden-Harris administration “put money where their mouth is” and practice ethical leadership?

It will not be easy, but there are steps the new administration can take to demonstrate their commitment to ethical leadership. Bringing in a wider range of expertise and perspectives means better representation of diverse communities, the disruption of groupthink, and more equitable decision-making in determining the path forward on a national and international scale. After the Biden-Harris COVID-19 Advisory Board announcement, there is clearly much work to be done in January. But there is also reason to be hopeful.

Sara Dada is director of implementation research and education for the Vayu Global Health Foundation and a research associate for Women in Global Health.


Roopa Dhatt is Executive Director of Women in Global Health.