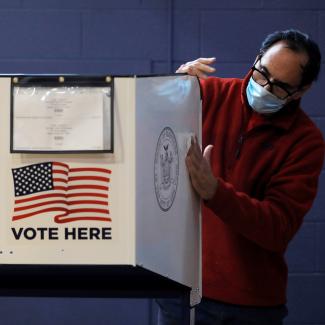 A man sanitizes a privacy booth to fight the spread of COVID-19 at a polling station in New York City, United States, on October 25, 2020. REUTERS/Andrew Kelly
by Samantha Kiernan and Caroline Kantis October 29, 2020

Nine months ago, U.S. President Donald J. Trump said the novel coronavirus was just “going to disappear.” Far from having disappeared, that same pathogen could instead determine whether he and the Republican party remain in power.

On November 3, the United States will conclude what pundits and experts alike are predicting could be a historic election, resulting in major political realignments in both the legislative and executive branches. While no one issue is likely to decide the election, the pathogen that has infected almost nine million Americans as of this week and has taken the lives of nearly 250,000 people in the United States is at the forefront of many voters’ minds. Roughly one-fifth of U.S. voters say COVID-19 is their top issue at the ballot box, while 55 percent view the outbreak as very important. Presidential and vice-presidential debates have focused on the pandemic, asking what went wrong with the Trump administration’s response and what, if anything, could a Joe Biden administration do better?

Roughly one-fifth of U.S. voters say COVID-19 is their top issue at the ballot box

Unfortunately for President Trump, COVID-19 is a losing issue. Only 40 percent of registered voters feel confident that he can handle the public health impact of the coronavirus, while 57 percent report confidence in former Vice President Joe Biden. Some pundits have gone so far as to say the entire election will be a referendum on how President Trump has handled the U.S. COVID-19 outbreak. But are these polls just speculation? Will COVID-19 be just an important issue at the ballot or the issue?

While these questions cannot be fully answered until after the U.S. election is decided, existing research cautions against assuming coronavirus will change the landscape of American democracy. Previous work suggests that conservatism, xenophobia, ethnocentrism, authoritarianism, and restrictions on women all tend to increase when levels of infectious disease are high. Additionally, a recent survey of voters in the United Kingdom, India, and the United States found that respondents do not hold incumbent parties accountable for the spread of COVID-19, even though most felt the government generally has some responsibility for health.

In terms of what has actually happened in 2020 national elections, the results are more mixed. Looking at five elections held during the pandemic in the Dominican Republic, New Zealand, Poland, Singapore, and South Korea, it seems that pandemic response may matter in electoral outcomes, particularly when the response has been successful, but by how much and how consistently across countries is uncertain.

The Dominican Republic held a general election on July 5, 2020, that saw the incumbent center-left Dominican Liberation Party (PLD) voted out of power in the presidency and both houses of Congress. When it went to the polls, the Dominican Republic had the worst outbreak in the Caribbean and was struggling with a summer surge. Many Dominicans criticized then President Danilo Medina’s relaxed approach to tackling the virus and disapproved of the government's pandemic response, particularly on testing and reopening strategies. Furthermore, his intended PLD successor was only garnering 35 percent support going into the election, trailing far behind the opposition candidate. Though the party’s poor pandemic response was indeed a central issue in the election, other serious concerns over inequality and PLD corruption undoubtedly contributed to the party’s landslide defeat.

New Zealand held a general election on October 17, 2020, that rewarded the incumbent, center-left Labor party with a substantial increase and outright majority in parliamentary seats and a second term for Prime Minister Jacinda Ardern. The Labor Party’s 2020 victory is its largest in fifty years and has been attributed to its world-renowned successful handling of the pandemic. In the weeks preceding the election, New Zealand was reporting fewer than ten new COVID-19 cases per day, and public health confidence in health officials and the government to manage the pandemic was above 80 percent. Prime Minister Arden also centered the Labor re-election effort around its pandemic response, notably launching her own campaign by asking if this was a COVID-19 election. Then, she said, "My answer is yes, it is.”

Percent of presidential votes for the incumbent leader

Poland held a presidential election in the summer of 2020 that saw the incumbent, right-wing president Andrzej Duda, remain in power without any clear shift in mandate. The tie between the government’s pandemic response and election results is uncertain, but other issues may have overshadowed COVID-19 at the polls. The government’s COVID-19 response was mixed. Back in May, the governing party pushed to hold a controversial mail-in vote that had been denounced by opposition candidates as a power grab. But by the summer election, Poland had avoided the transmission and deaths that befell much of Western Europe at that time. On the campaign trail, President Duda did not focus on his government’s response to COVID-19, instead centering his campaign around social issues, especially LGBTQ+ rights, the European Union, and the judiciary.

South Korea held a legislative election on April 15, 2020, that resulted in a historic victory for the incumbent, center-left Democratic Party and its sister group. Earlier in 2020, a faltering economy, political scandals, and stalled talks with North Korea seemed to foretell terrible results for the governing Democratic Party. However, the government’s COVID-19 response, which began as the second-worst outbreak after China but quickly came under control, transformed South Korea from a cautionary tale into an international success story. The government's adept handling of the crisis was cited as the most decisive factor in the parliamentary outcome.

Singapore held a general election on July 10, 2020, that did not result in major political shifts for the incumbent, center-right People’s Action Party. However, the opposition made unprecedented and largely unexpected gains. Whether this shift was driven by the pandemic is uncertain—but it seems unlikely. The People’s Action Party received praise early on for its response to the pandemic. Despite struggling with outbreaks among migrant workers and changing policies on masks and lockdowns in the late spring, the country was in relatively good shape going into its summer election. And no opposition party focused the election around COVID-19, instead hammering on issues such as population size, immigration, inequality, and executive power.

At this point, one cannot say whether a government’s pandemic response will determine its electoral results. Evidence from these five countries suggests that parties and politicians who were successful at combating COVID-19 and centered their campaigns around the pandemic may see gains in national elections. However, these examples also highlight that while voters care about how their government has handled the pandemic, other issues still matter and may even matter more. So, what does this mean for the United States? While the U.S. Republican Party and President Trump’s pandemic response may not be a guaranteed death knell for their election prospects, their response has been criticized as one of the worst in the world, and the Democratic Party has not missed an opportunity to make that perceived failure the center of its national campaign.

COVID-19 Has a Strong Chance of Winning on November 3

Surging infection numbers suggest coronavirus cases will continue to increase in every state until the U.S. election

Leading by Example: COVID-19 Infections at the Highest Levels of Government

We should address U.S. investment choices in Public Health Infrastructure and Universal Health Care after COVID-19