Go to homepage
Indigenous Land Guardianship Around the World
Environment

Indigenous Land Guardianship Around the World

An interview with conservationist and Nia Tero founder Peter Seligmann 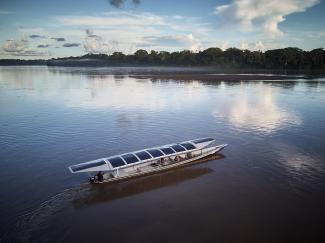 Sunkirum, a solar-powered canoe, sails on the Pastaza River in the Amazon in Ecuador, where the Achuar Indigenous people have lived for thousands of years. Photo by Pablo Albarenga
by Mary Brophy Marcus March 18, 2022

Think Global Health: How did Nia Tero come about?

Peter Seligmann: What has happened in the last five centuries, since the early 15th century, is that there has been an extraordinary colonization and destruction of non-western peoples and culture. And at the same time, since the industrial age, there has been an acceleration of the destruction of the ecological health of the earth. Much of it started out with extraction of resources: timber, minerals, expansion of farmlands just to feed a growing population. And then there was that unintended, unanticipated consequence of the radical transformation of climate which has just resulted in a tipping point of extraordinary shifts.

When you look at the global environment, it's remarkable that the places that are still healthy are mostly under the guardianship of Indigenous people

It is not a coincidence that the territories that are under the guardianship of Indigenous peoples are actually healthy. It's because of the way that Indigenous cultures acknowledge their reciprocal relationship with the other beings that they share their place with, about the interdependency. And it's very clear, it is not unspoken. They say, we have an obligation to take care of you—you forests, rivers, jaguars, and plants—and you take care of us.

The creation of Nia Tero came as I was ready to leave Conservation International, and I was really focusing on what the solutions are to climate change and what is the role that nature plays in that. So that was the seed of this evolution into Nia Tero. When we figured out that a third of climate solutions involve the mitigation of CO2, and that that is going to come from nature, the natural question was, where on this planet Earth are those really important places? Who owns them? Who controls them? Who lives there? And that's when we began to realize that when you map these important ecological systems, half of the tropical forests on earth are controlled by Indigenous peoples. Yet you'd have to be blind not to see that the policies and the laws, and the behaviors of corporations and governments, are basically an assault on those territories.

There was no organization that existed that was really aligned with supporting Indigenous guardianship and that was comprised of a diversity of cultures. So we created an organization that learns from the wisdom of Indigenous peoples, that's governed by a group of Indigenous and non-Indigenous peoples, and that can work directly in protecting culture and supporting efforts of communities to secure their cultures in their places. We thought that would be a really useful contribution to address social injustice but also to address and accelerate solutions for climate change and for ecological loss.

Think Global Health: Who do you want to engage with and how do you do that?

The other thing I learned is I was diving into building this organization, and that we learned from Indigenous leaders around the world, was that that there is a power dynamic. The big money was always controlled by foundations and corporations, run principally by white men or were built on the fortunes that came from those people. So the solutions rested with others' wisdom and there was great sensitivity and great distrust.

We had to think about how to build an organization that would be trusted and earned trust. It's not easy and instantaneous and it requires intense listening, and some of the things that you hear are not that pleasant. But it's been wonderful and I am learning great humility.

Think Global Health: Can you share some examples of your work in communities?

Peter Seligmann: We went into the Vale do Javari, one of the largest Indigenous territories in Brazil, about four years ago. It is a valley that is about the size of Portugal, so it's big. It has no roads, no airstrips, and perhaps an estimated 10 tribes of Indigenous peoples that have had very little contact with the outside world, and it's under assault. The Brazilian government under Bolsonaro, the president of Brazil, has said, we know it's against the law to invade but we're going to look the other way while miners, farmers, fisherman go and take what they want.We went there at the request of some Indigenous peoples and visited with some communities—communities that had only just recently had contact with the western world in the last five years. They live in fear because the minors, fisherman, and loggers come in and they shoot their kids, they threaten lives, they spread disease. When we were visiting the warriors, men and women, they were basically saying, "You show up and then you leave, you promise and you don't deliver, you take pictures and you're gone."

They said, "You show up and then you leave, you promise and you don’t deliver, you take pictures and you're gone"

We have to overcome that by how we communicate, how we listen, what we promise, and then what we deliver. And part of the trust is that our team includes Indigenous peoples who are also warriors who have been fighting this fight for generations for the survival of their territory, but also the survival of their families and their lives.

So, we are now in the Vale do Javari and we have resourced the guard stations, we have financed the legal battles of Indigenous lawyers, appealing to the Supreme Court to stop Bolsonaro, to stop allowing missionaries to come in, stop allowing industry to come in. For the first time, the Supreme Court of Brazil ruled in favor of Indigenous peoples and issued an executive order immediately for the government of Brazil to change their behavior.

So we are looking at the legal and policy tools that have to be redesigned. We look the guard stations to control access. Do you have boats and fuel to be able to protect your people.

Peter Seligmann: The commitment of our organization is enduring support. That comes through different ways, but it means assisting communities to have the tools to respond on their own to the threats, and to have relationships with other organizations who can support them, as well.

Think Global Health: How do you get the money you need to support communities to protect their territories and culture? And how do they in turn get money to support themselves?

Peter Seligmann: That can be done through philanthropy, through designing businesses, enterprises they control. And part of it is education, so the children in Indigenous communities are taught the value of their own ancestry and their own language.

The other part of it is getting governments and the public to know that it is in their enlightened self-interest to support Indigenous guardianship because the territories that they control provide us with vital water, vital biodiversity, and vital carbon. That the wisdom they have surely can be helpful to the rest of us as we look at the balance of this planet and figure out how to take care of it in a different way.

Think Global Health: How do you choose where Nia Tero works?

Peter Seligmann: The places we've chosen to start—we're just four years old, so we are young—are three parts of the planet largely under the control of Indigenous people who make collective decisions and still have collective ownership over territories that are really important ecologically. So, it's the western Pacific with oceans and forests, like Papua New Guinea, the Solomon Islands, New Caledonia, the Cook Islands. The Northern Amazon, a rich source of above-ground carbon, and the richest epicenter of biological diversity on the planet, and a massive source of fresh water. And then the Northern Boreal stretching across Canada, with its massive peat bogs and forests and freshwater lakes. Those are the three mega territories where we've started and right now we are working with 200 Indigenous communities where we have shared commitments, and where we support them with what they need to thrive and they ensure that their territories remain healthy and vibrant.