A personal story of COVID-19 in Kenya 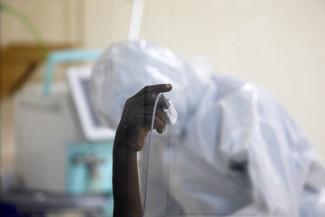 A coronavirus disease patient holds up his hand inside the COVID-19 ICU of Machakos Level 5 Hospital, in Machakos, Kenya on October 28, 2020. REUTERS/Baz Ratner
by Luqman Mushila Hodgkinson August 2, 2021

Our beloved father Charles Mushila Shibeka died of COVID-19 in Kenya in December 2020. The story of his final days illustrates the health situation faced by many people in Kenya and around the world.

Our father Mushila was a great man, a strong man. He had diabetes and was on dialysis, but he remained a pillar of our family and he enjoyed his life at home with our mother Rita Mutola Mushila who he had loved for 50 years. One day, Father was sitting outside under his favorite Musutsu tree from the Kakamega Forest, a tropical rain forest in Kenya that borders our home. Ever happy, he loved children, and on this day, he was teaching his grandchildren good manners and respect.

"When you see people, speak to them, don't be silent," he told his grandchildren. "Ask them how they are, show concern for them."

When you see people, speak to them, don’t be silent. Ask them how they are, show concern for them

In December 2020, he began feeling very weak. Two days later he could hardly walk. It was Father's scheduled day for dialysis but the nurses and doctors at the public county hospitals had gone on strike, protesting lack of personal protective equipment (PPE) for COVID-19, and they weren't seeing patients. Since Father was very ill, my brother Imoli and I rushed him to a private hospital in Kisumu about one hour away by car. The private hospital asked for a deposit of about $3,000 out-of-pocket. Unable to get dialysis there, we took him to the public hospital in Kisumu. The dialysis nurses were on strike there, too. His blood oxygen level was dropping dangerously low, so he was taken by ambulance to Moi Teaching and Referral Hospital (MTRH) in Eldoret, the second largest national hospital in Kenya, where the nurses and doctors were still working. During the several hour ambulance ride, the oxygen tank ran out of oxygen necessitating an emergency stop at a local hospital for a refill.

At MTRH, he finally received dialysis and oxygen but his breathing continued to deteriorate. He was tested for COVID-19 which came back positive the next day. Based on protocol, Father was transferred to the COVID-19 isolation unit. Speaking with people affiliated with the unit, family members serving as caregivers managed essentials of living for the patients in the unit including feeding, dressing, and bathing, so I entered the isolation unit with Father while Imoli remained outside to pass in needed food and supplies.

"You are doing good work, my son," Father told me when we were able to get him back safely on oxygen

"You are doing good work, my son," Father told me when we were able to get him back safely on oxygen.

Since he could breathe better when sitting up and leaning forward, at night he would lean forward to rest his head on my shoulder and would remain there breathing laboriously until the morning. When he was desaturating even on high flow nasal cannula, he was taken to the COVID-19 ICU and given a mask that forced oxygen into his lungs (continuous positive airway pressure, CPAP).

The COVID-19 isolation ICU had only four beds. They had no ability to intubate. A nurse and doctor were intermittently available. By this time Father had not had dialysis for many days and his body was swelling with fluid. The doctor and I agreed that he needed dialysis and that he was unlikely to make it through CPAP treatment without dialysis. However, a portable vent was not available to transport him on CPAP to the dialysis unit. We were told there was no water supply in the COVID-19 isolation ICU to be able to perform dialysis bedside.

While discussing how to get Father dialysis, the oxygen pressures dropped in the ICU and the two patients on CPAP in the ICU began desaturating (in the four-bed unit, one patient had died the night before with the bed still vacant and one patient had improved and had been weaned off of CPAP). All available oxygen tanks in the unit were empty. The doctor said there was nothing he could do. I rushed throughout the unit looking for an oxygen tank but all I found were empty ones. Returning to our father's bedside, he was desaturating to dangerously low levels and becoming hypotensive—when blood pressure drops extremely low. Calling our mother and other family members outside of the isolation unit, I put the phone by his ear so they could wish him farewell.

Travel safely, Father, our sisters told him, as Mother began praying with love for his safe travels.

To take Father's body home, we had to pay the hospital thousands of dollars. This was especially difficult as my brother had lost his job in a tourist camp due to lack of tourism. The National Health Insurance Fund (NHIF), threatened with insolvency, had announced that they would not cover hospital expenses related to COVID-19. As a result, many people were not taking sick loved ones to hospitals for testing as they were afraid of being bankrupted if family members were forced into isolation. It was very common to deny that COVID-19 even existed and when relatives died, deaths were being attributed to malaria or other causes. Our friends, including at Masinde Muliro School of Medicine, donated a portion of Father's funeral expenses for which we were extremely grateful.

Travel safely, Father, our sisters told him, as Mother began praying with love for his safe travels

Father left a legacy in many ways including through his family. Our hope is that this story allows him to leave another legacy—a call to action to the international community on the continued need to improve health-care facilities in Kenya and other low- and middle-income countries for COVID-19 patients. We want families to see loved ones treated according to high international standards so that they are able to recover and enjoy their lives. The global community should also come together to ensure sufficient COVID-19 vaccines around the world to prevent this awful disease from creating illness, claiming more lives, and pushing families into deep poverty.

This is a personal story written to raise awareness. It is not to criticize any country, especially not my home country of Kenya, but rather to describe the inadequate global response, and to advocate for greater focus on health systems globally to address the COVID-19 pandemic. Health systems around the world are ill-equipped to respond to the COVID-19 pandemic and need assistance from the international community.

Luqman Mushila Hodgkinson, PhD, MS is an Adjunct Professor at Masinde Muliro School of Medicine, in Kakamega, Kenya, and an MD/MPP Candidate at Stanford University.