Extreme temperature is a threat to global health 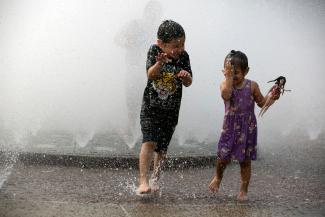 Children cool off in the Salmon Springs Fountain as a heat wave hits the Pacific Northwest in Portland, Oregon, on July 30, 2021. REUTERS/Elayna Yussen
by Sarah Wozniak and Michael Brauer August 20, 2021

A recent "heat dome" in the Pacific Northwest brought temperatures above 110°F in parts of Oregon, Washington, and British Columbia. These record-breaking temperatures killed hundreds of people, and sent many more to the hospital. With a warming climate, we're seeing more and more health problems caused by heat waves in urban areas. But surprisingly, cold kills more people globally than heat each year.

In 2019, cold temperatures killed nearly four times as many people as warm temperatures, according to a new study from the Institute for Health Metrics and Evaluation. Today, cold temperature deaths are most common in Europe, Central and East Asia, and North America.

So would a warming climate actually be a net benefit for health? No—as temperatures increase globally, any reduced risk for death from cold will be more than offset by the increased risk from heat.

As temperatures increase globally, any reduced risk for death from cold will be more than offset by the increased risk from heat

Rising temperatures will affect people most severely in places that are already warm and climate change will exacerbate current disparities where heat takes a toll on health. We're already seeing these trends play out. For example, over the past 30 years, the disease burden from heat increased markedly in sub-Saharan Africa and parts of Latin America, including Mexico, Guatemala, and Colombia. These three countries and others have shown widening gaps between the proportions of people exposed to risk of death from cold and warm temperatures—indicating that heat is a rapidly emerging health threat.

How do extreme temperatures lead to illness and death? As temperatures become very hot or cold, a person's body works harder to maintain a normal core body temperature of around 98.6°F (37°C), which stresses the respiratory and cardiovascular systems. This stress can lead to illness or death from non-communicable diseases, including cardiovascular diseases, chronic obstructive pulmonary disease, diabetes mellitus, and chronic kidney disease. The more extreme the temperature, the harder it is for a person's body to maintain a healthy temperature, and the person's risk of falling ill or dying increases. This is particularly true for heat: extreme heat causes the risk for many non-communicable diseases to increase sharply.

Heat can also make it harder for people to safely perform physical labor and do intellectual tasks. As temperatures rise, people are more likely to die from injuries. When temperatures are warmer, people spend more time in the water, increasing the risk of drowning. Heat also leads to impulsiveness and aggression, increasing the number of people who die in road accidents, or who take their own life or the lives of others.

In Thailand, for example, heat is already wreaking havoc on health, and its ill effects will increase substantially over time. The burden of disease linked to hot temperatures far exceeds the burden from cold temperatures, contributing to cardiovascular diseases, diabetes, kidney disease, and respiratory infections. In Thailand, heat also plays a role in deaths from road injures, suicide, and homicide, which were among the top ten killers of people between the ages of 15 and 49 in 2019. Rising temperatures will only exacerbate these challenges.

"As temperatures rise, people are more likely to die from injuries"

With the warming global climate, how can countries adapt to reduce the negative health effects of rising temperatures? Within cities, leaders can help by promoting urban forests and vegetation, investing in infrastructure that maximizes heat reflection, and setting up cooling centers for extreme heat episodes. Focusing on equity is especially important—low- and middle-income countries will bear the brunt of illness and death from heat. Heat will also disproportionately harm older adults, individuals experiencing social isolation, those with mental health challenges, racial and ethnic minority groups, and low-income populations across the globe, so strategies specifically targeted to these more vulnerable people are necessary.

We also can't forget about the harmful effects of extreme cold as we focus on the growing threat of extreme heat. In the countries where cold kills many people every year, it is essential to improve building design and to retrofit homes with insulation to save lives. Policymakers and leaders also need to tailor strategies to address the impact of temperature on human health in specific locations. There are countries where needs differ widely across communities: in Brazil, for example, heat causes a greater burden of disease than cold overall. However, patterns vary dramatically across states. In Piauí, death rates related to high temperatures are more than forty times those linked to cold temperatures. However, in Rio de Janeiro, both hot and cold temperatures are important risks for death: cold temperatures are responsible for about five times as many deaths as heat.

The toll of heat and cold on people across the globe has risen dramatically since the 1990s. It is now more urgent than ever to implement population-level interventions to protect the most vulnerable from extreme temperatures. The just-released Intergovernmental Panel on Climate Change's Sixth Report highlights a need for stronger actions to reduce emissions. Without strong efforts to address the causes of climate change, heat-related deaths will only continue to increase in the future. At the same time, efforts enacted now that enhance equity and resilience against the health impacts of warmer temperatures are critical to reducing the health burden from rising global temperatures.

EDITOR'S NOTE: The authors are employed by the University of Washington's Institute for Health Metrics and Evaluation (IHME), which leads the Global Burden of Disease study described in this article. IHME collaborates with the Council on Foreign Relations on Think Global Health. All statements and views expressed in this article are solely those of the individual authors and are not necessarily shared by their institution

Sarah Wozniak is a second-year post-bachelor fellow at the University of Washington's Institute for Health Metrics and Evaluation (IHME) where she works on where she works on the disease burden of air pollution on the Environment, Occupation, and Diet Team.